I am going to just preface this post by saying I want to move to NYC… actually, more than want – I need to move to NYC. Or at least travel there All.The.Time. I had such a blast this past weekend, and I wish I could have stayed an extra few days. or week. or year. My favorite part? all of the walking! Why can’t it be like that here in Columbus?! Anyways, below is a recap of the shenanigans I got into this weekend – including yogancing with the one and only Cuchira (Tamara Levinson-Campos), solo dinners, broadway shows, and a life-changing massage! 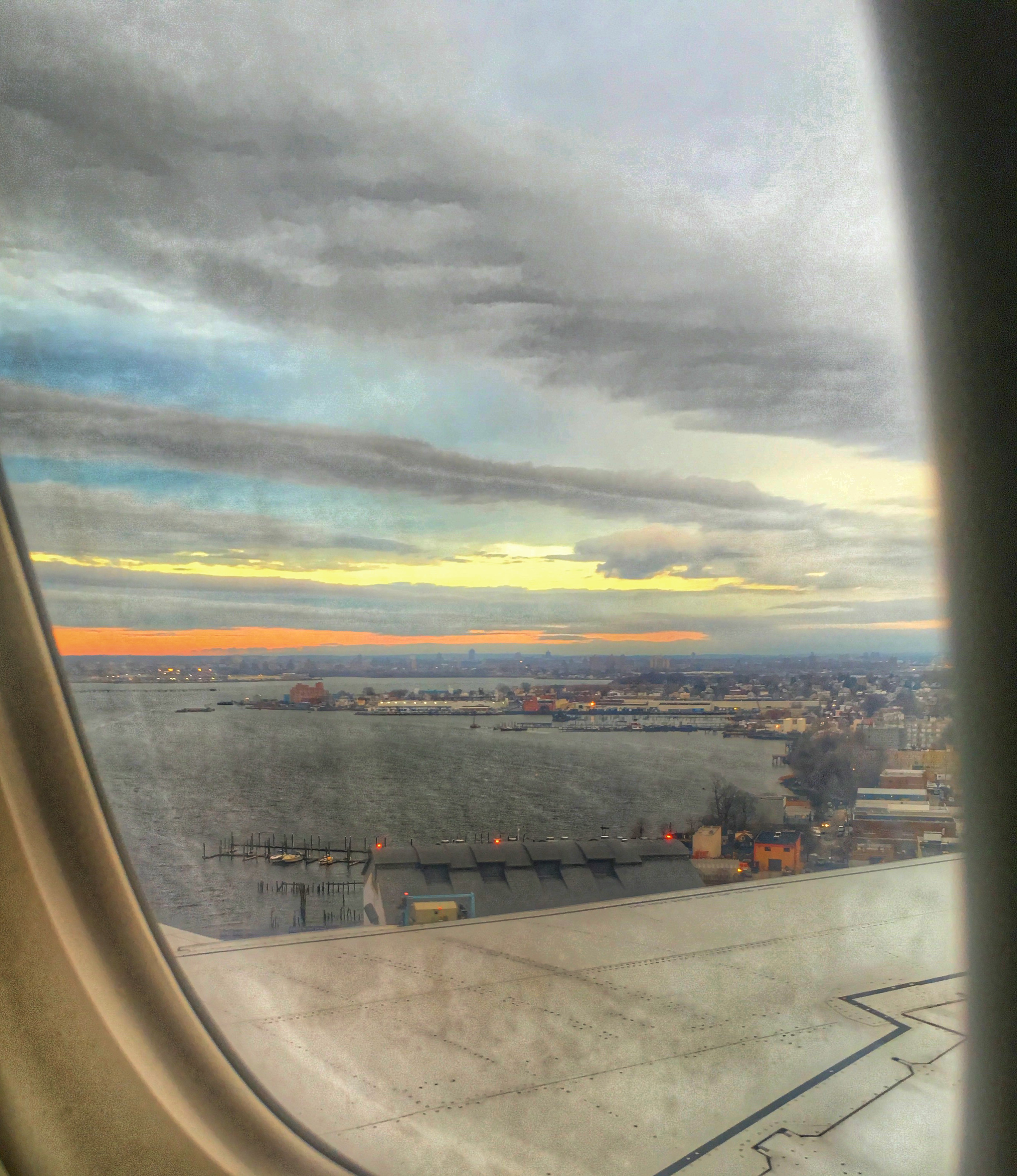 I arrived at Laguardia at 7 am on Friday morning, and it took 3.5 hours until I finally made it to my hotel…. I took a shuttle from the airport, and  was the last one to be dropped off at my hotel. By the time I arrived, it was raining and cold – meaning, my plans to go for a run in central park were shot. So, I decided to head straight to the Spa – The Great Jones Spa, which was recommended by a few friends. I have never been to a water lounge before, and I ended up staying for a solid 2.5 hours! I did a few rounds of sitting in the steam room, then the hot tub… then the sauna, cold plunge water bath, then hot tub… then relaxing and repeating. I almost wish I had gone for a run beforehand, as this would have felt even more better on my muscles! My sinuses & entire body felt amazing after! 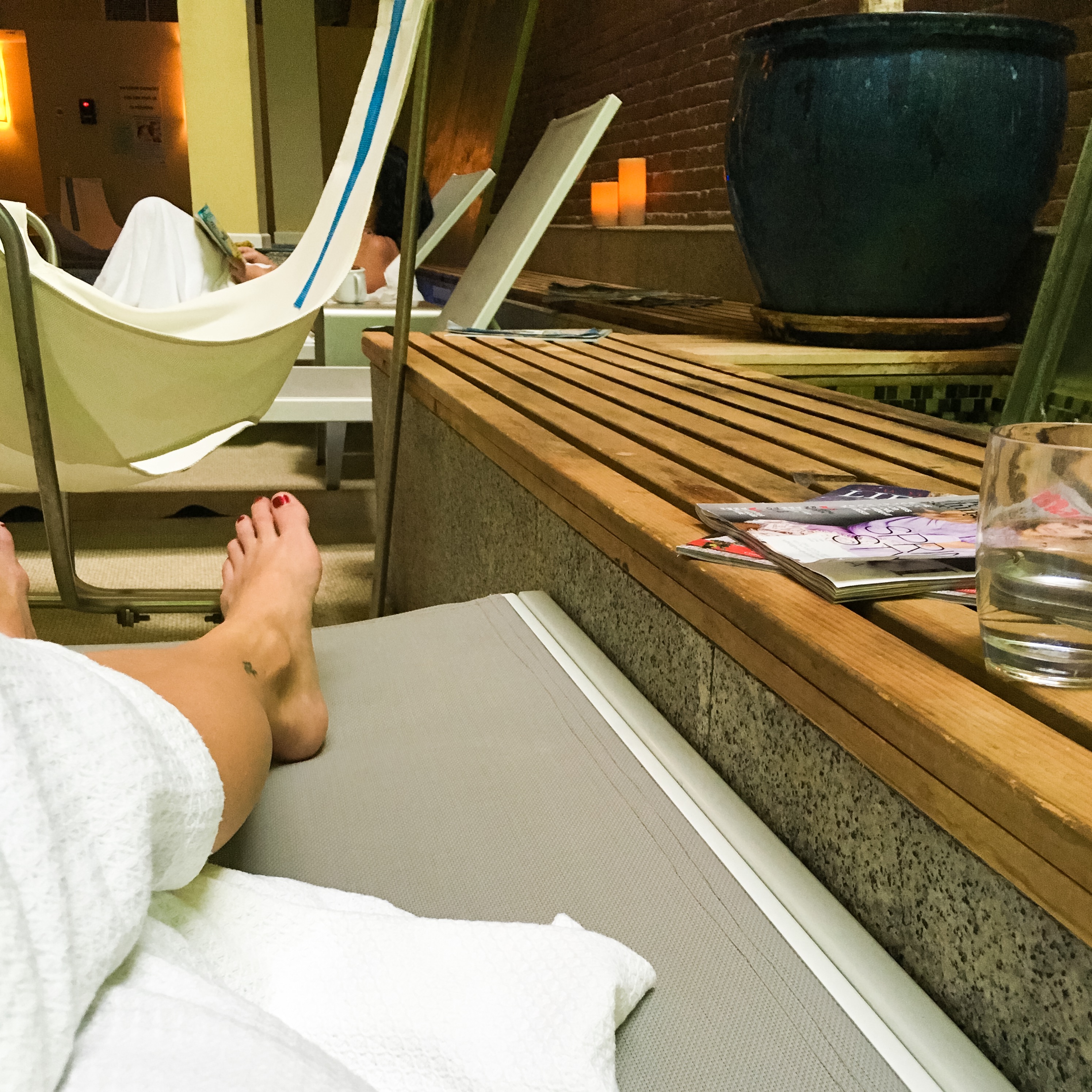 Since I had only eaten 2 protein bars the entire day, I decided to continue being a responsible adult and grab something to eat afterwards – ICE CREAM. I looked on yelp and found a place on the way back to my hotel that had some amazing-sounding ice cream cones – Big Gay Ice Cream. I went all out and got a salted caramel cone rolled in crushed pretzels, dipped in chocolate and topped with peanut butter. Yep, my stomach was happy after that 🙂 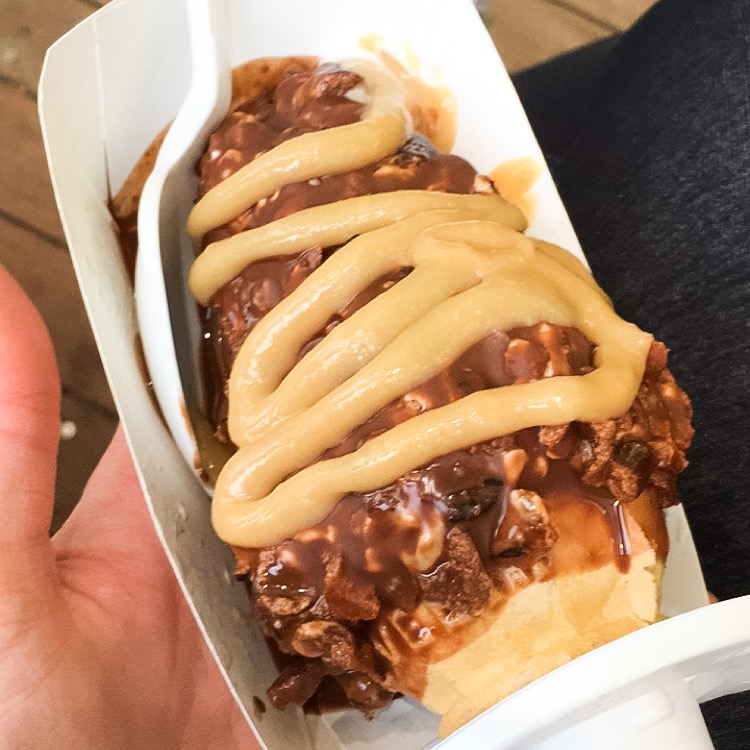 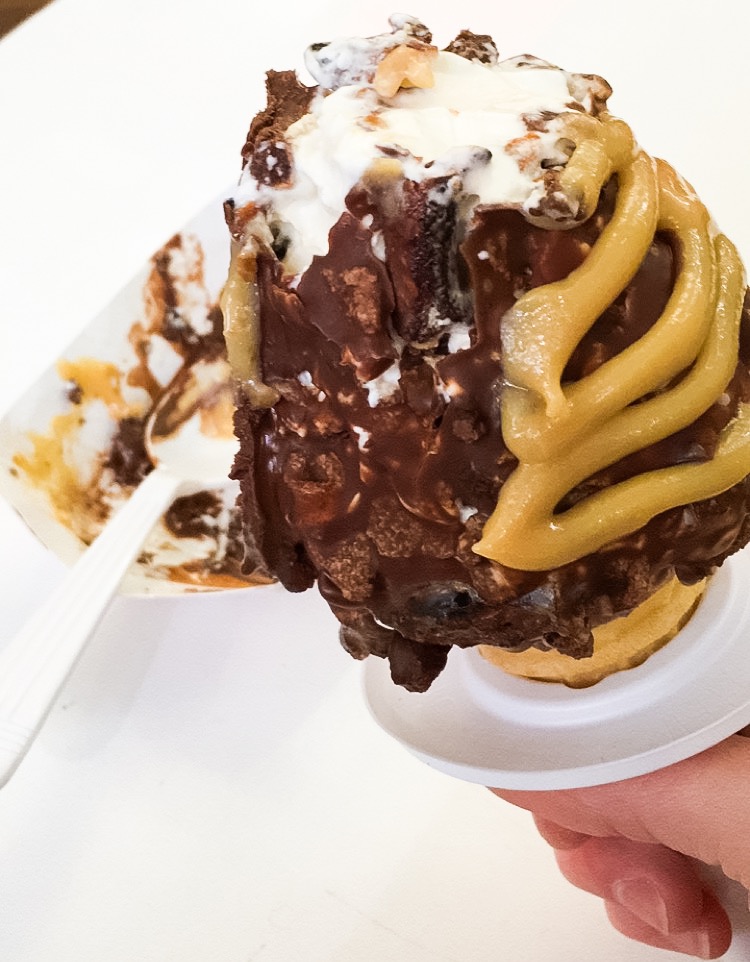 After arriving back at my hotel room – or should I say SHOE BOX?? (my room was 5×7, no Joke) – I got ready to go out with a fellow yoga-teacher-trainee that I met in Belize back in March. After doing a handstand, of course 😉 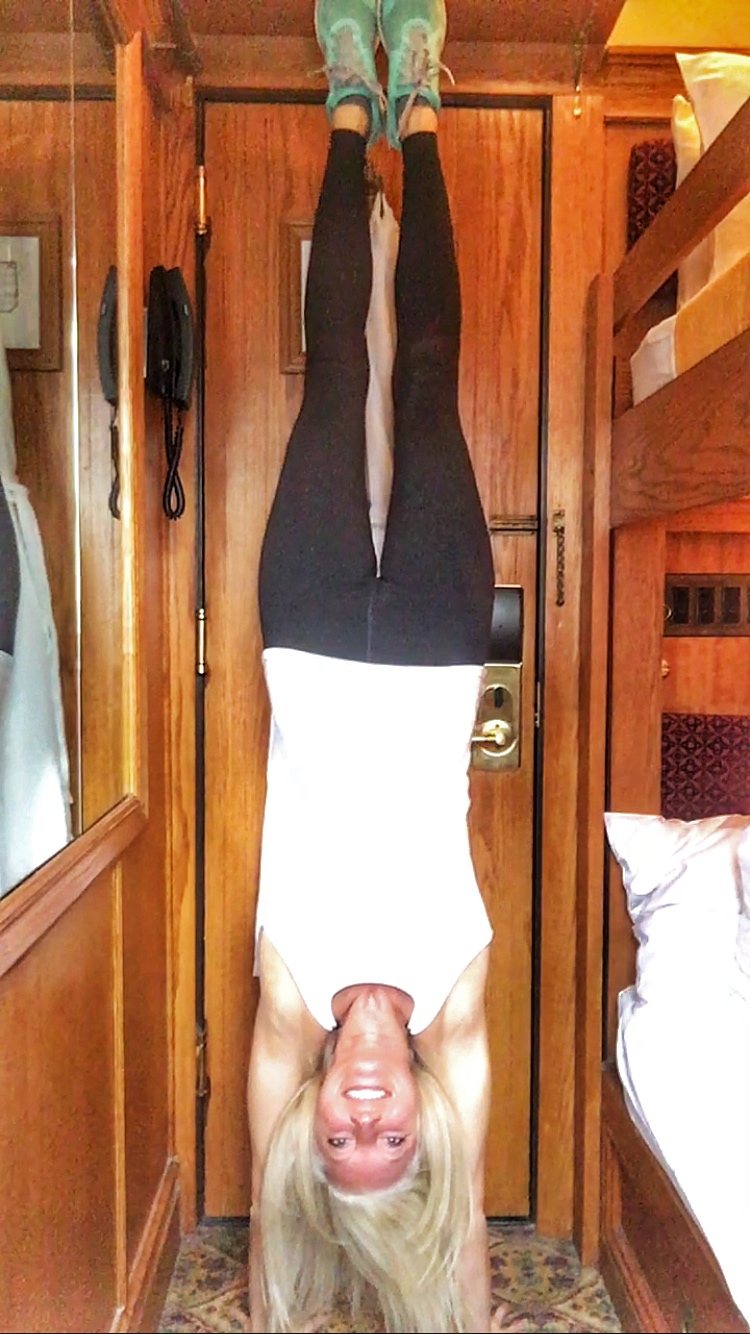 We met up for a drink and apps (avocado toast + brie!) at my hotel bar, then headed out to her friends apartment. On the way back, we stopped for a nightcap at a bar nearby, and I ended up getting home around 2 am. After such a long day, I ended up sleeping in until 11 am the next morning! I woke up to my back-up alarm, which means I probably could have slept a lot longer.

I hurried up and ran to visit the highline, a park built on an old railroad spur. The views of the city were amazing! 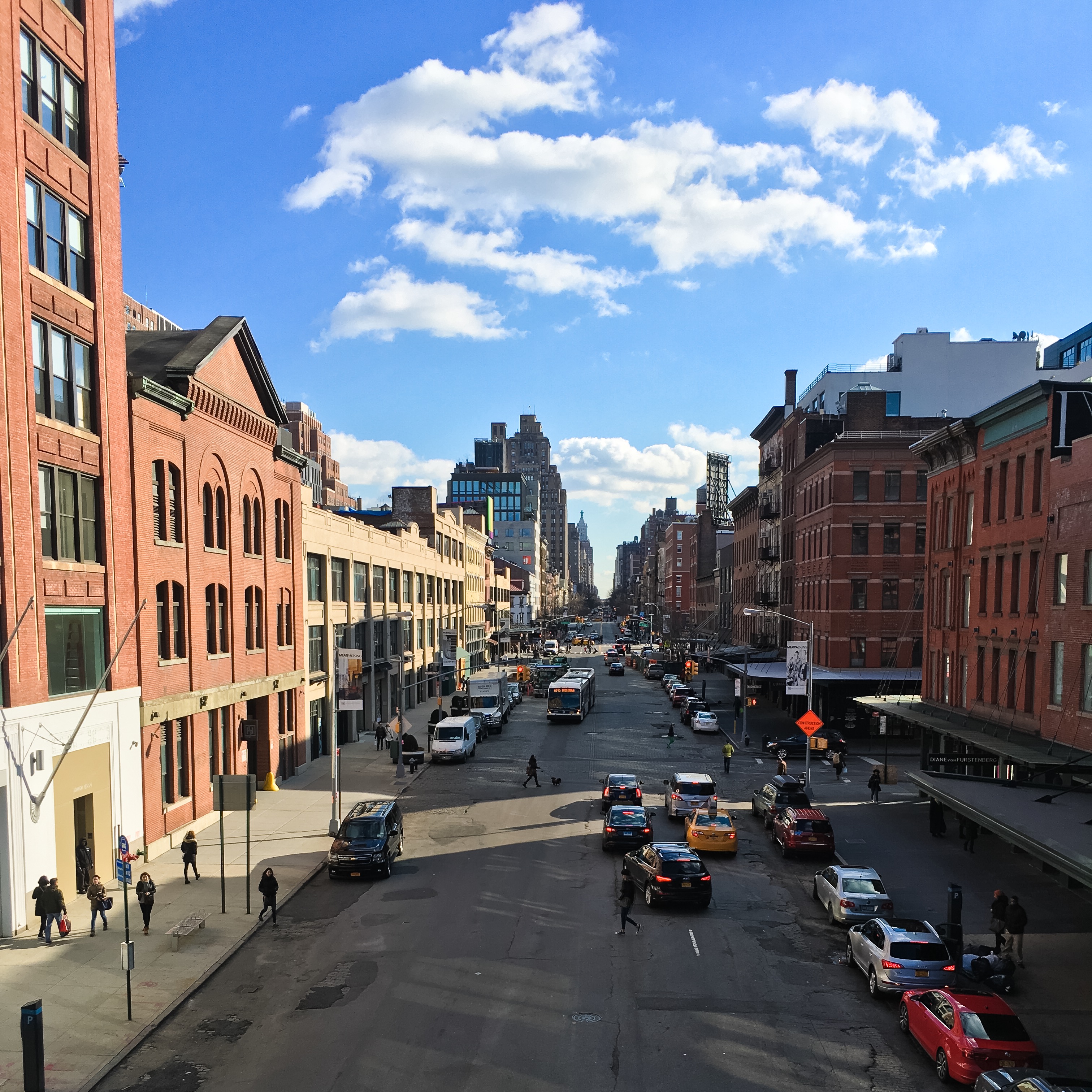 It was also ridiculously cold, so I scooted my butt into Chelsea Market for something warm and a bite to eat. 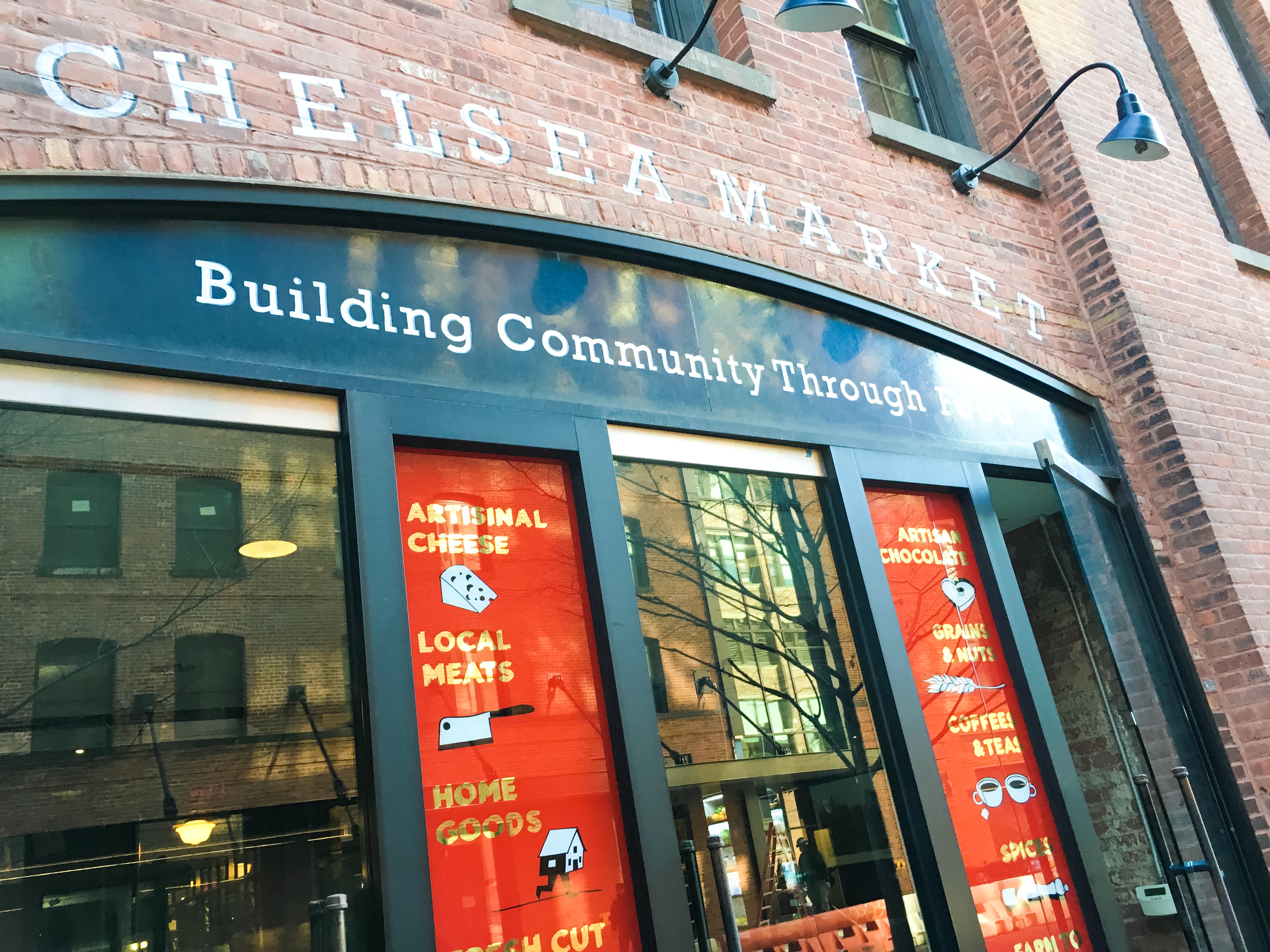 I settled on Sarabeth’s Bakery – a latte and pastries for brunch? heck. yes. 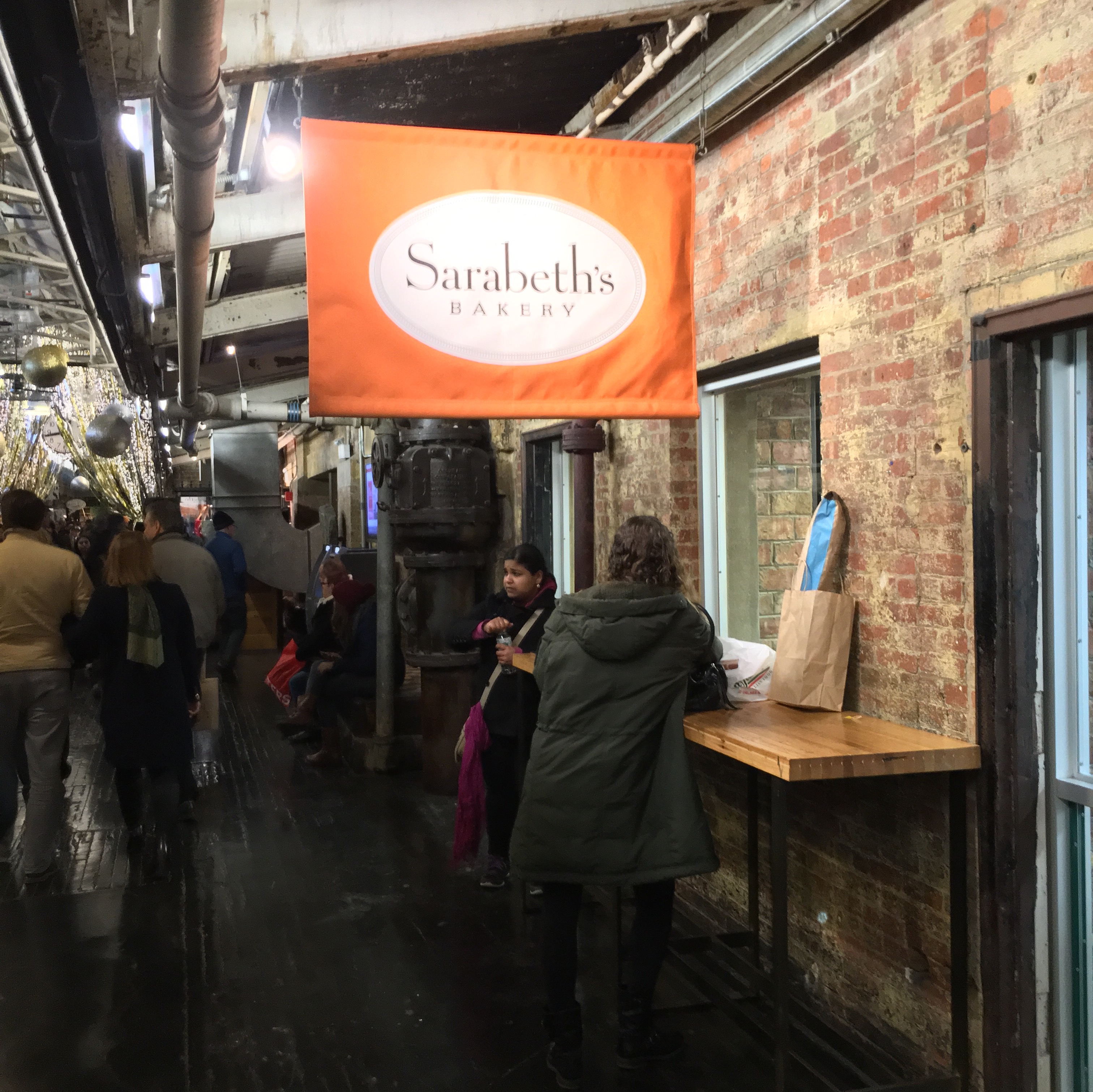 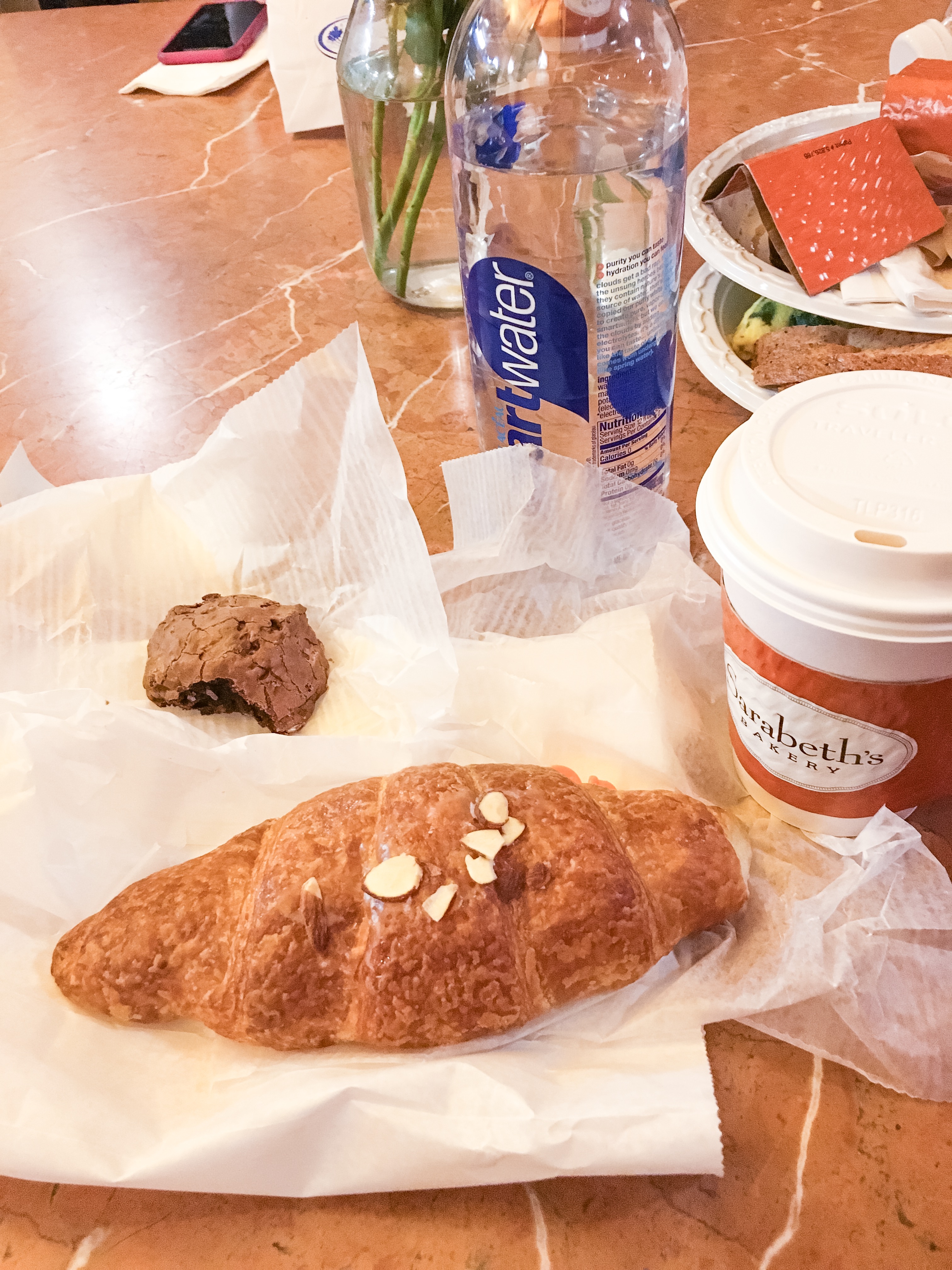 There were so many places to eat, I couldn’t just stop at an almond croissant and cookie… I also had to get a hot chocolate topped with mascarpone gelato & whipped cream. Because sugar and coffee cures hangovers, right?? I know, I know, I am awesome at being an adult. 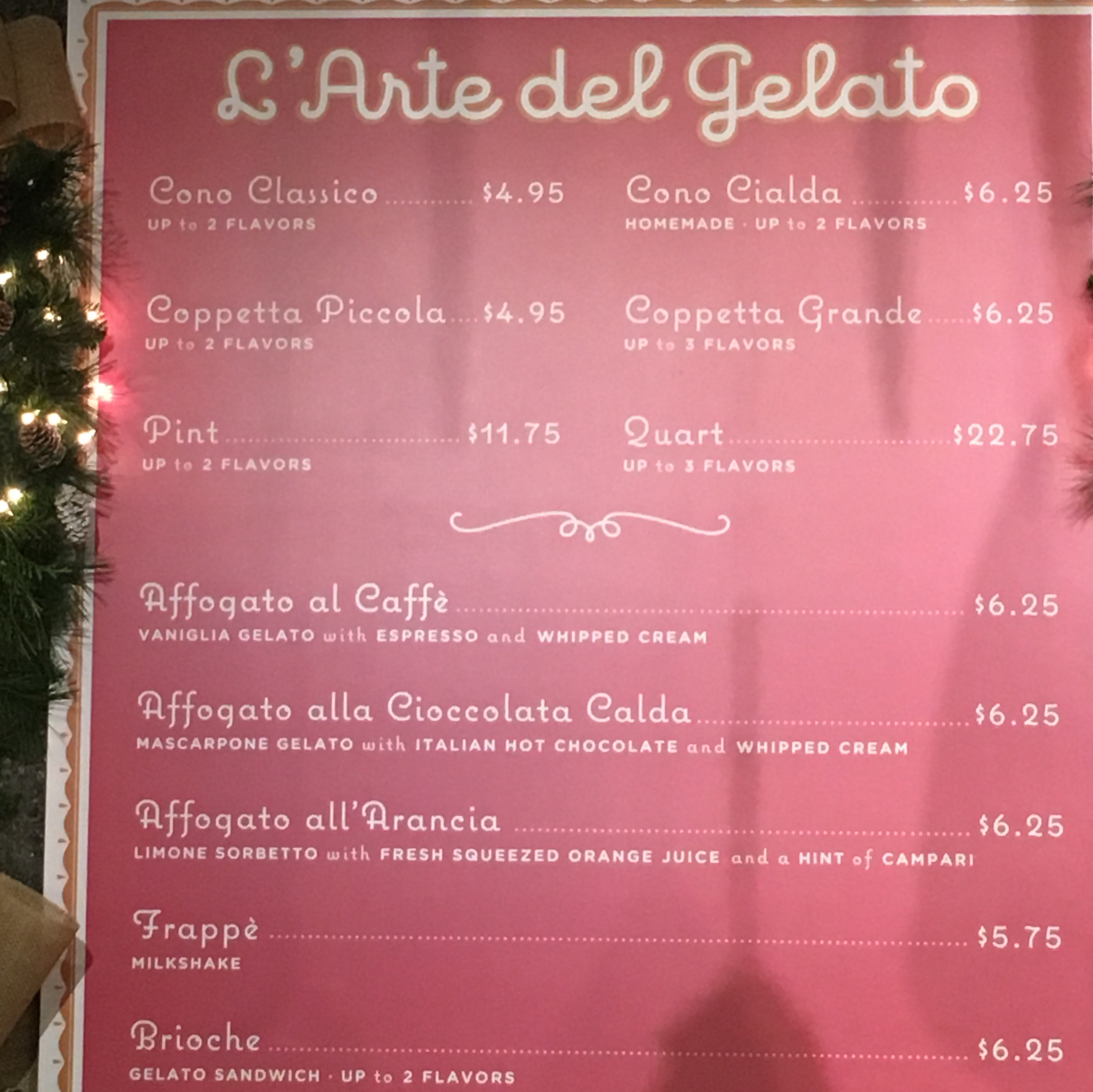 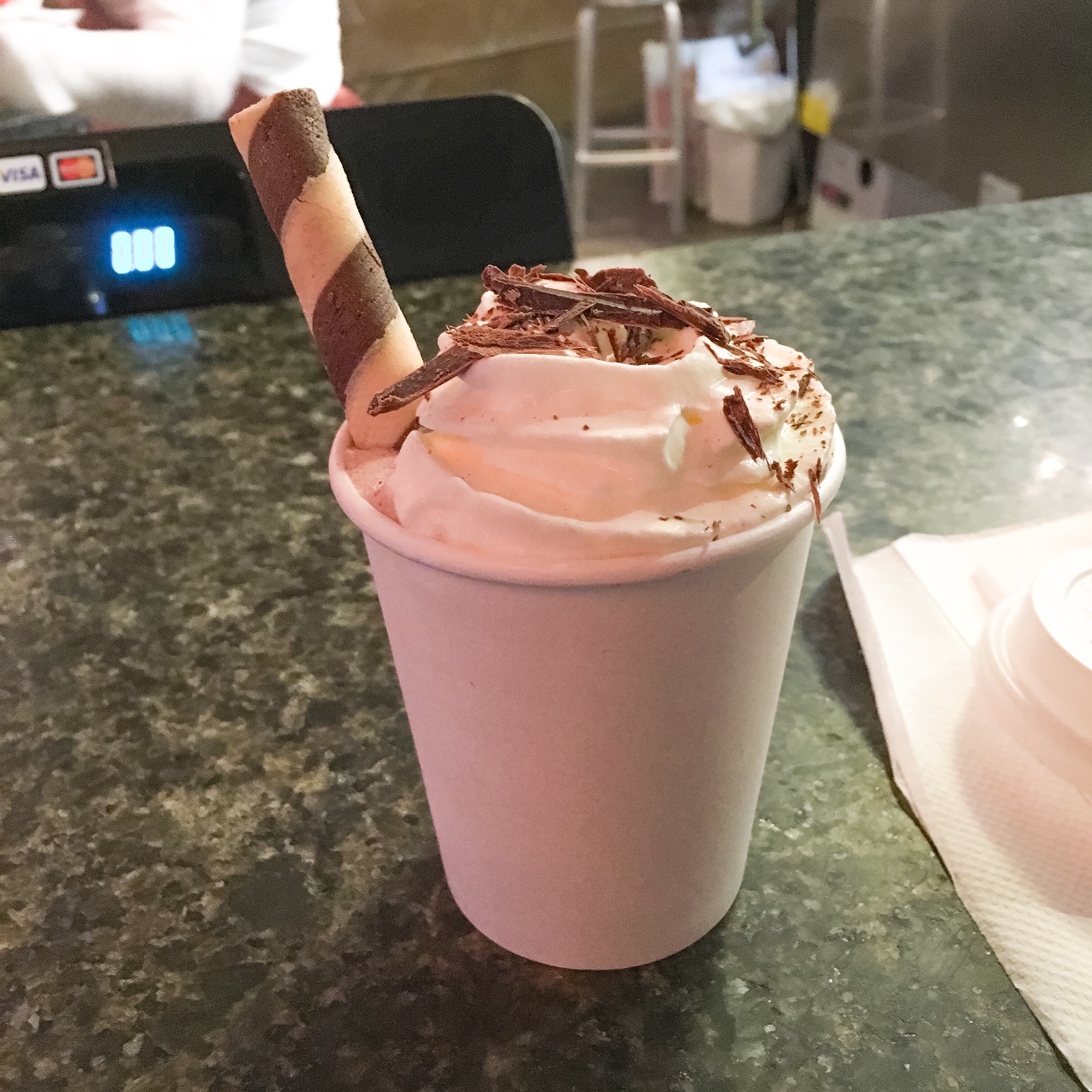 I walked over to PMT Dance Studio, the main reason for my NYC visit: taking a Yogance workshop with Tamara Levinson-Campos! I ended up meeting a ton of wonderful people – my favorite being Jo, a lovely yoga teacher from England who runs her own yoga retreats in Ibiza! Another thing to add to my bucket list 😉

Tamara showed up about 15 minutes before the workshop, and sat down to chat with everyone. It was like another student showed up and waited with us – she was super down-to-earth and awesome! The workshop itself was amazing – we learned about engaging the mula bandha, and the proper alignment for every single yoga pose/movement! Something so so simple and surprisingly easy to understand. I will be incorporating this into my classes 🙂 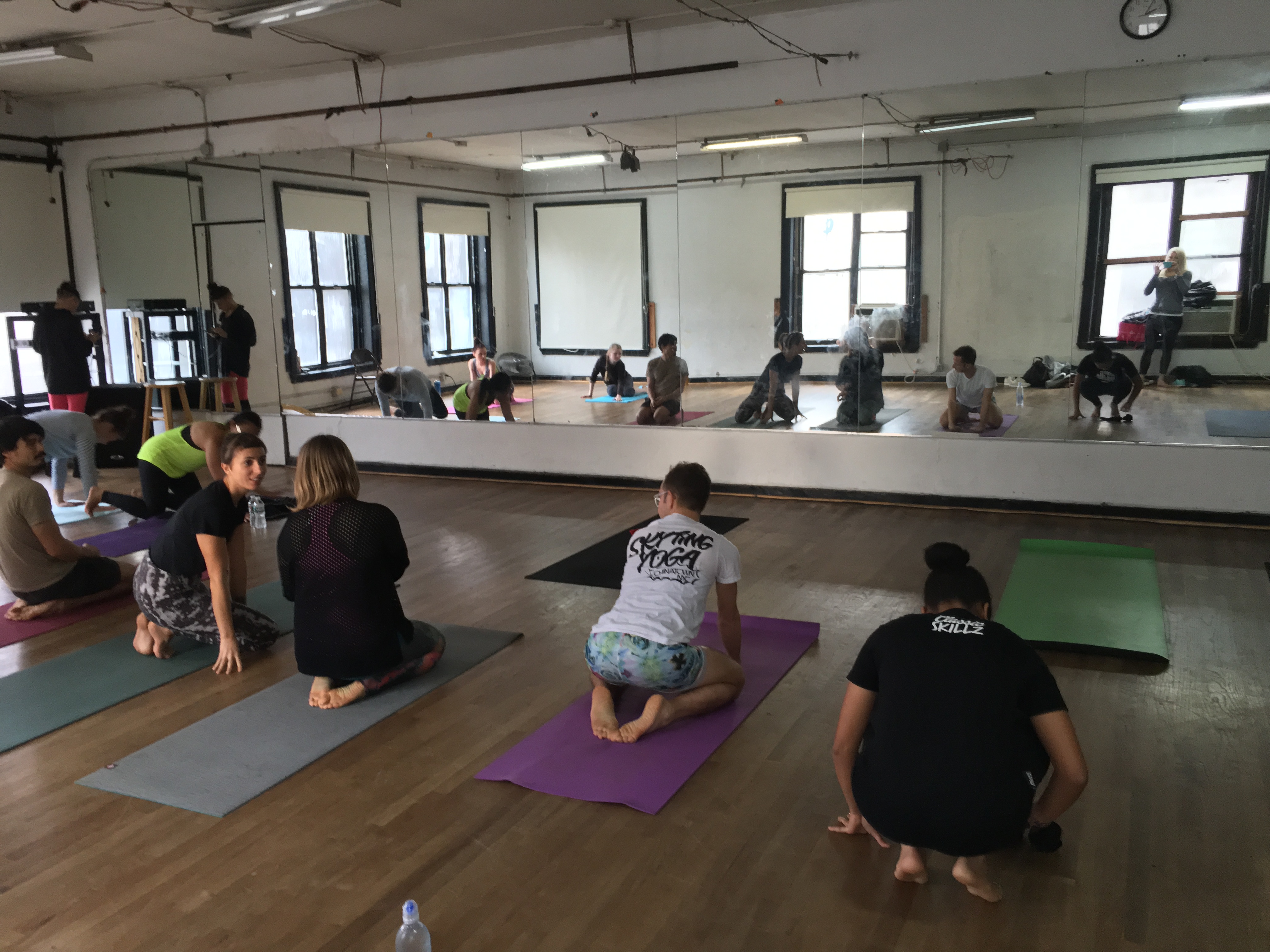 After, we learned a yogance sequence, and I was surprised by how easy it was! There was no pressure, just moving and lots of smiles. Following the sequence, we did partner work – music was turned on, and our partner basically controlled our movements by touching us in different places, and we moved our bodies in whatever directions our partner touched. Different, but the lesson was to pay attention to how it felt in our bodies & be controlled by someone else. The workshop ended with 10-20 minutes of Savasana – much welcomed, since my sugar-coffee hangover headache was in full affect by that point. 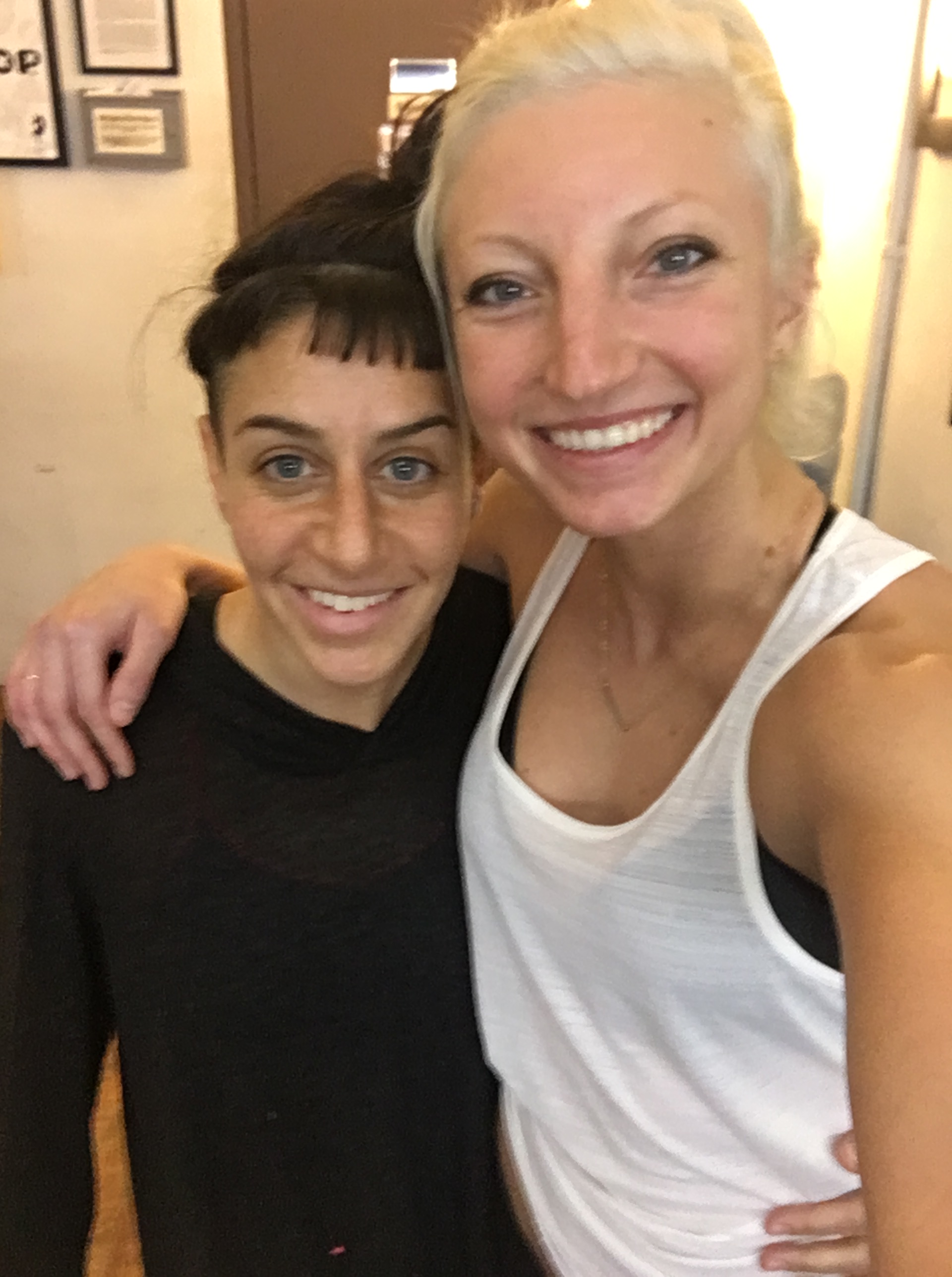 I ended up staying for about a half hour to chat with Tamara, got a selfie and of course a handstand picture with her! Hopefully I will get to see more of this lovely, kind woman in the future at the studio I teach at… stay tuned!

Afterwards, I rushed back to my hotel to get ready for broadway – to see Book of Mormon! I took an Uber to Soho to grab dinner, but unfortunately the restaurant didn’t open until 7… No problem – I hopped in another Uber, and found a super close restaurant near times square to eat at: Cielo at the Mayfair, a cute italian restaurant nestled underground. 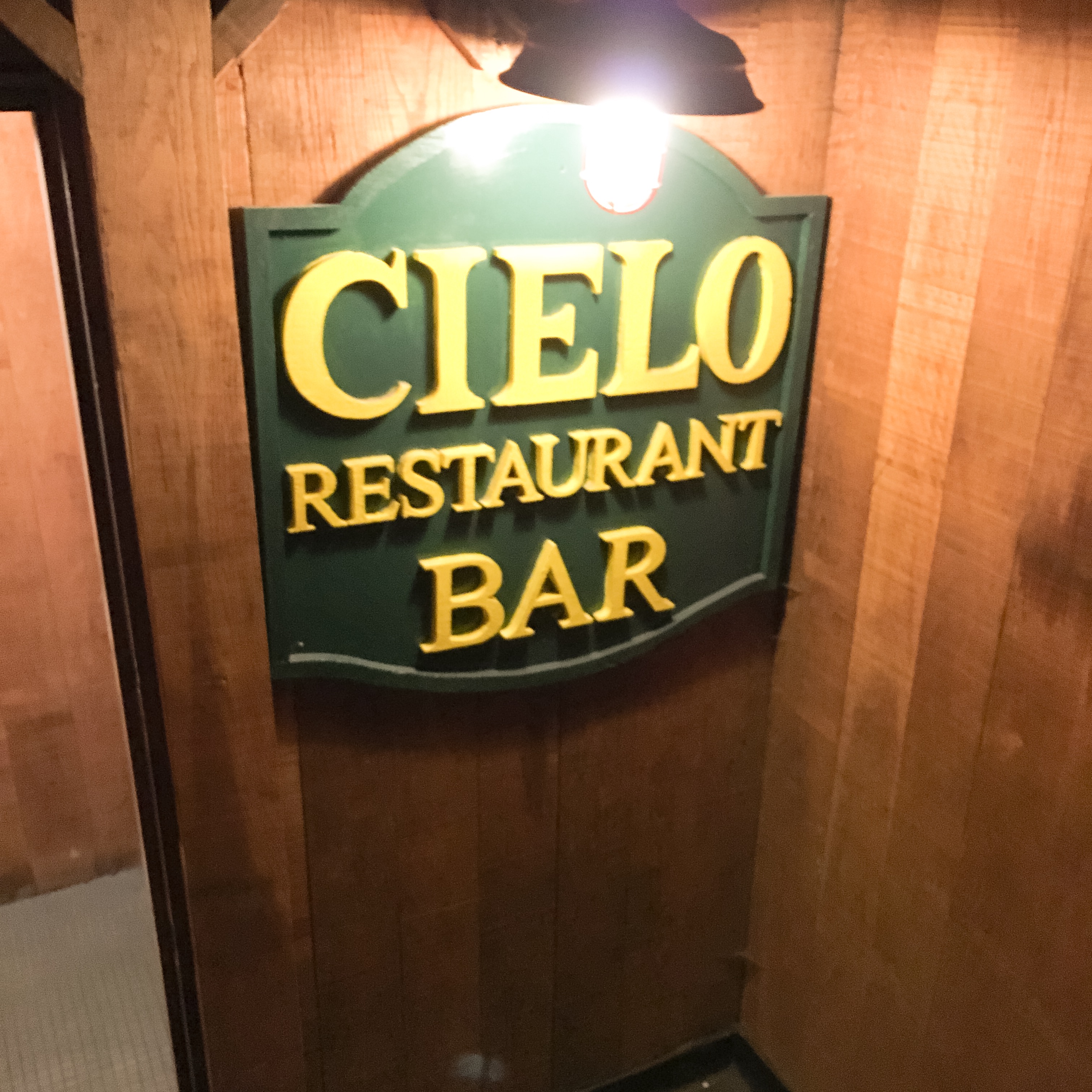 I ordered a glass of wine and a half order of gnocchi – seriously to die for. and their garlic bread? Amaaaazing – dipped in herbs & olive oil and served warm. This was right next to the Eugene O’Neille theatre, so I was able to catch the show in time. If you are ever in the area… another great place to eat 🙂 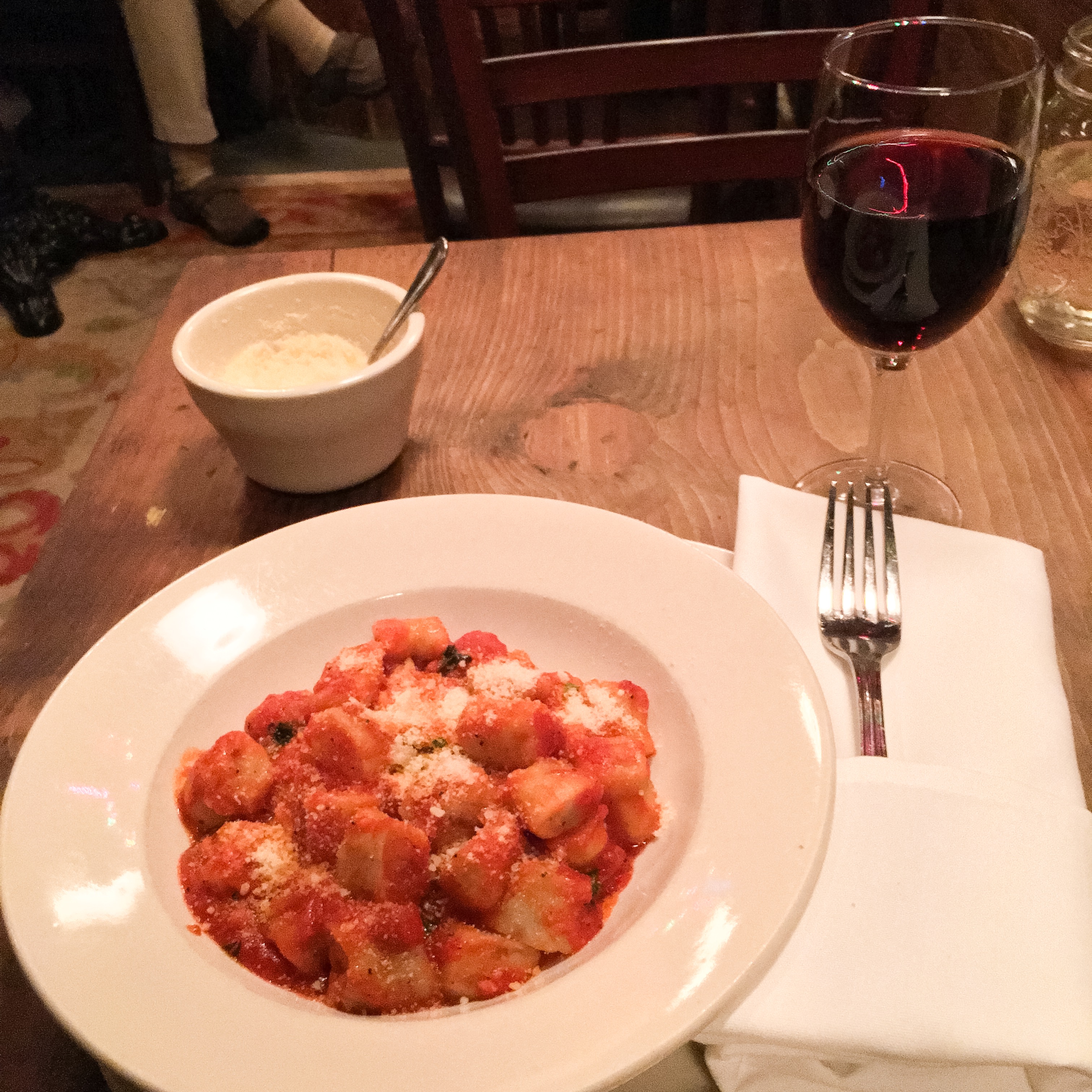 Book of Mormon – pretty much every single one of my friends has told me to go see this on broadway, so I shelled out the money ($280, I am cringing just thinking about it) and bought the ticket. I think I was crying from laughing so hard throughout the entire show, so I would say it was well worth it! Yes, it was crude and vulgur, but I’ve seen worse. Do yourself a favor and see it, you won’t regret it!

Afterwards, I headed back to my shoebox and fell asleep by 12:30…. all this walking and yoga and sugar and good food had me beat!

The next morning, I met up with my friend again for brunch, and we grabbed coffee at Kaffe 1668 in Tribeca. This place was decorated with a ton of little sheep, and there was a downstairs area perfect to set up shop if you wanted to do a little work on your laptop. 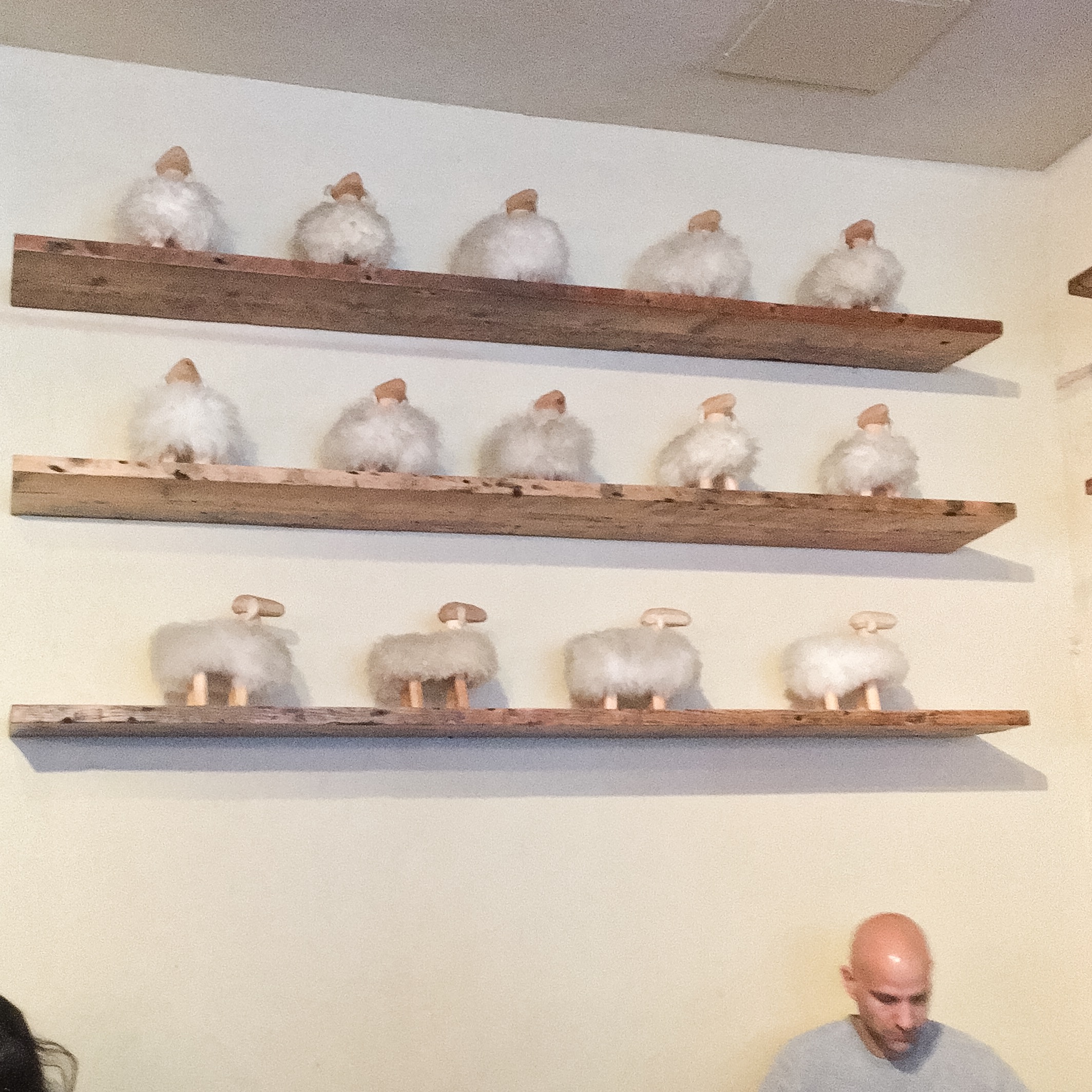 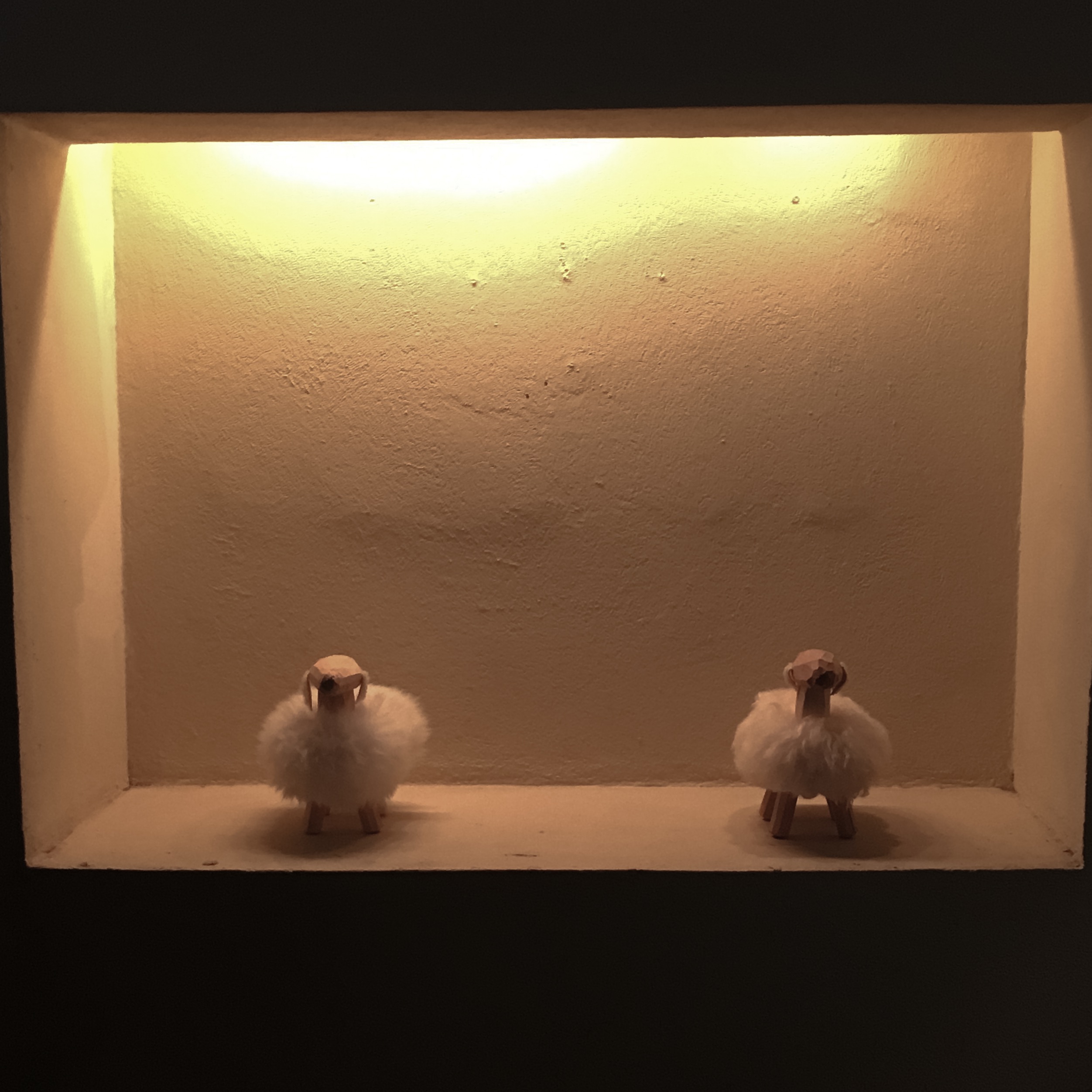 I ended up getting the Mocha Latte and Blueberry Scone – because, why not. I really wanted to try the slow-drip coffee, but didn’t want to be too wired for my massage afterwards! 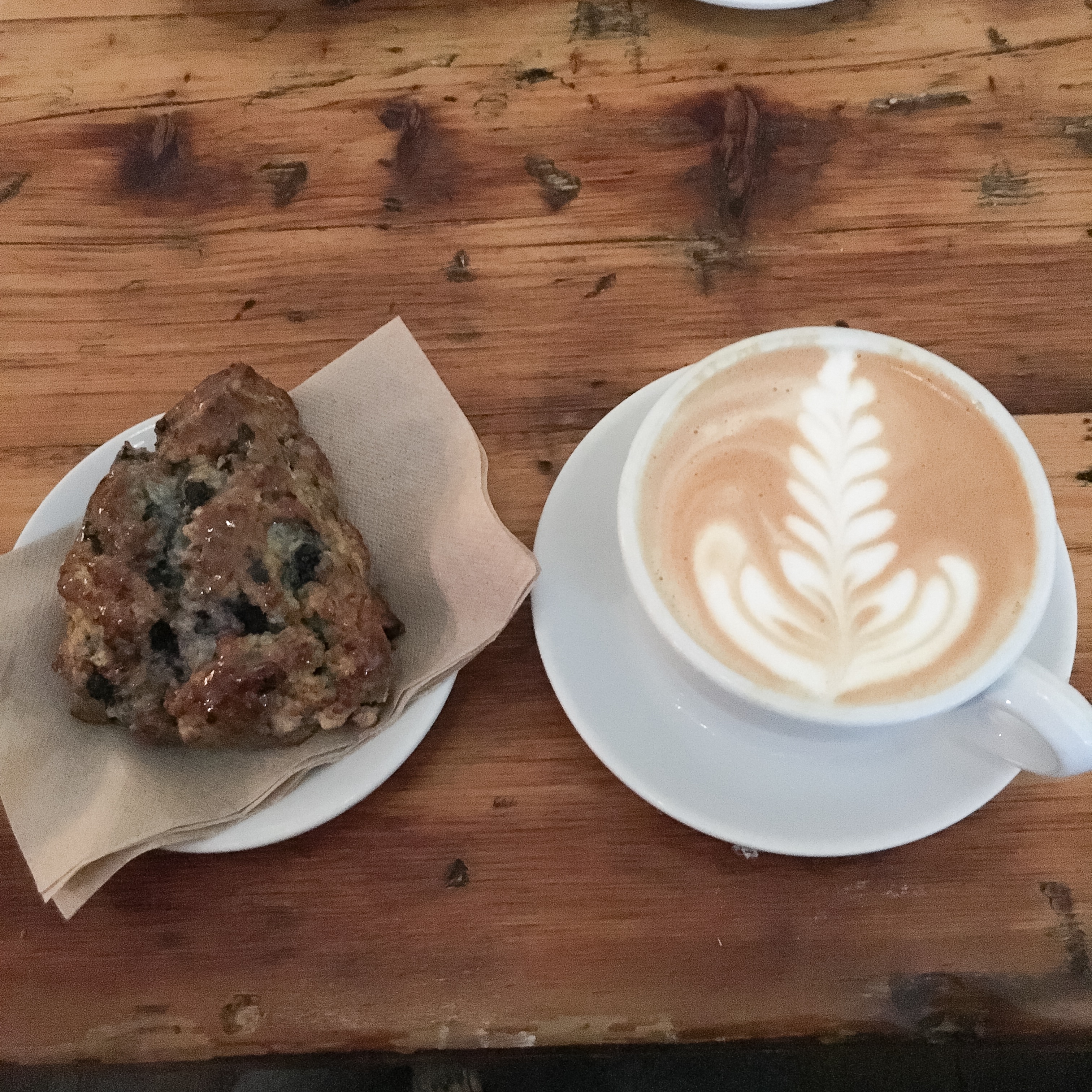 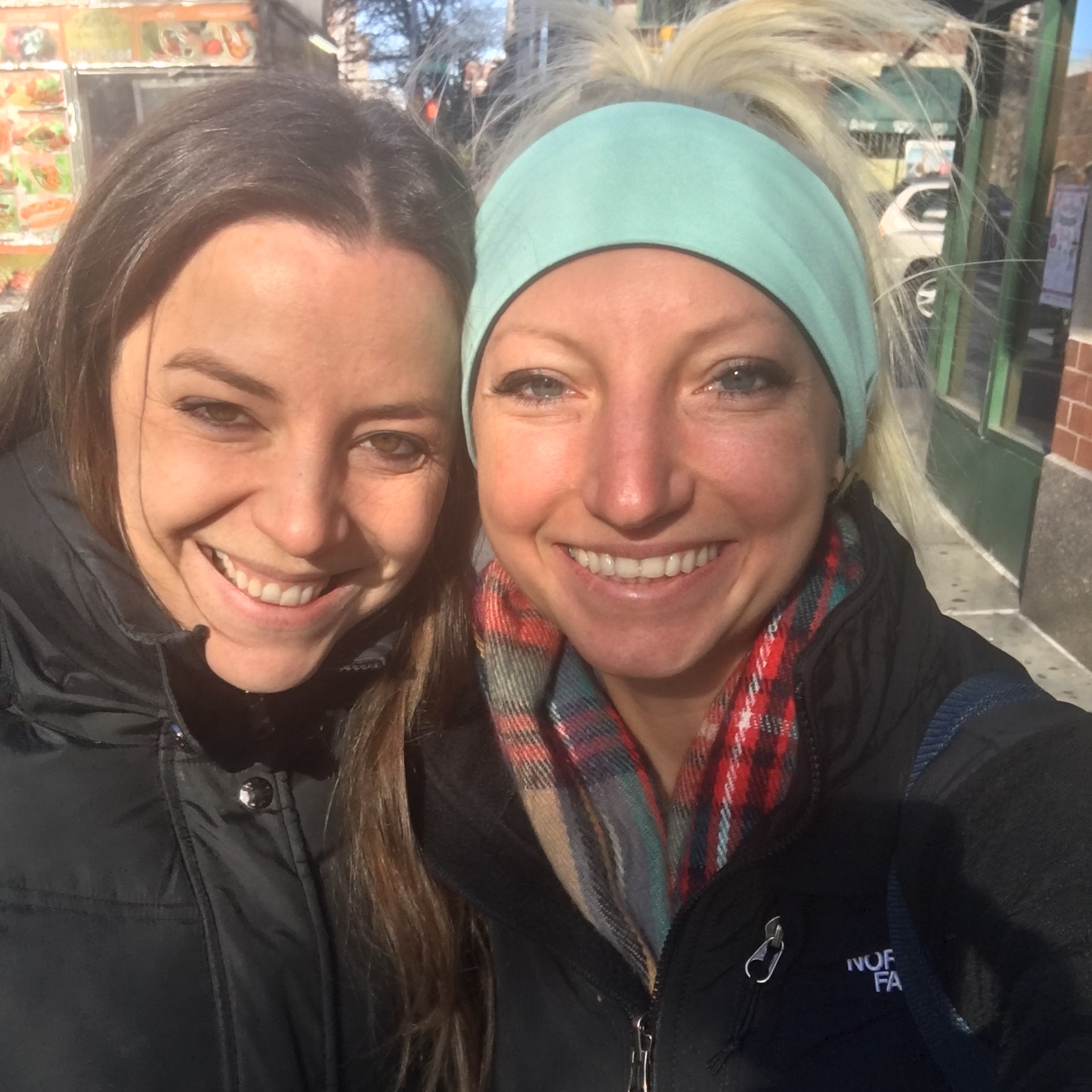 After saying our goodbyes, I grabbed an uber to grand central, where I had the most amazing massage of my life at Body Mechanics. It had the best reviews on Yelp for what I was looking for, and I am so, so, so, SO happy I went! My masseuse Laura was AMAZING. She was so knowledgable about the anatomy of the body, the fascia, ligaments, etc – since she works on professional athletes and dancers all day, she knew exactly what to work on when I told her about my issues. Deep tissue, trigger point therapy and warm towels were all part of the massage – she even went a little over time to get to everything I needed worked on. We chatted a lot about how to do trigger point/massage on myself at home, and how to massage away from the muscle fibers, going deep into the belly of the muscle to get results (disclaimer: its painful, but oh-s0-good). Afterwards, she gave me tennis balls to use for trigger point therapy while at work, traveling, etc. 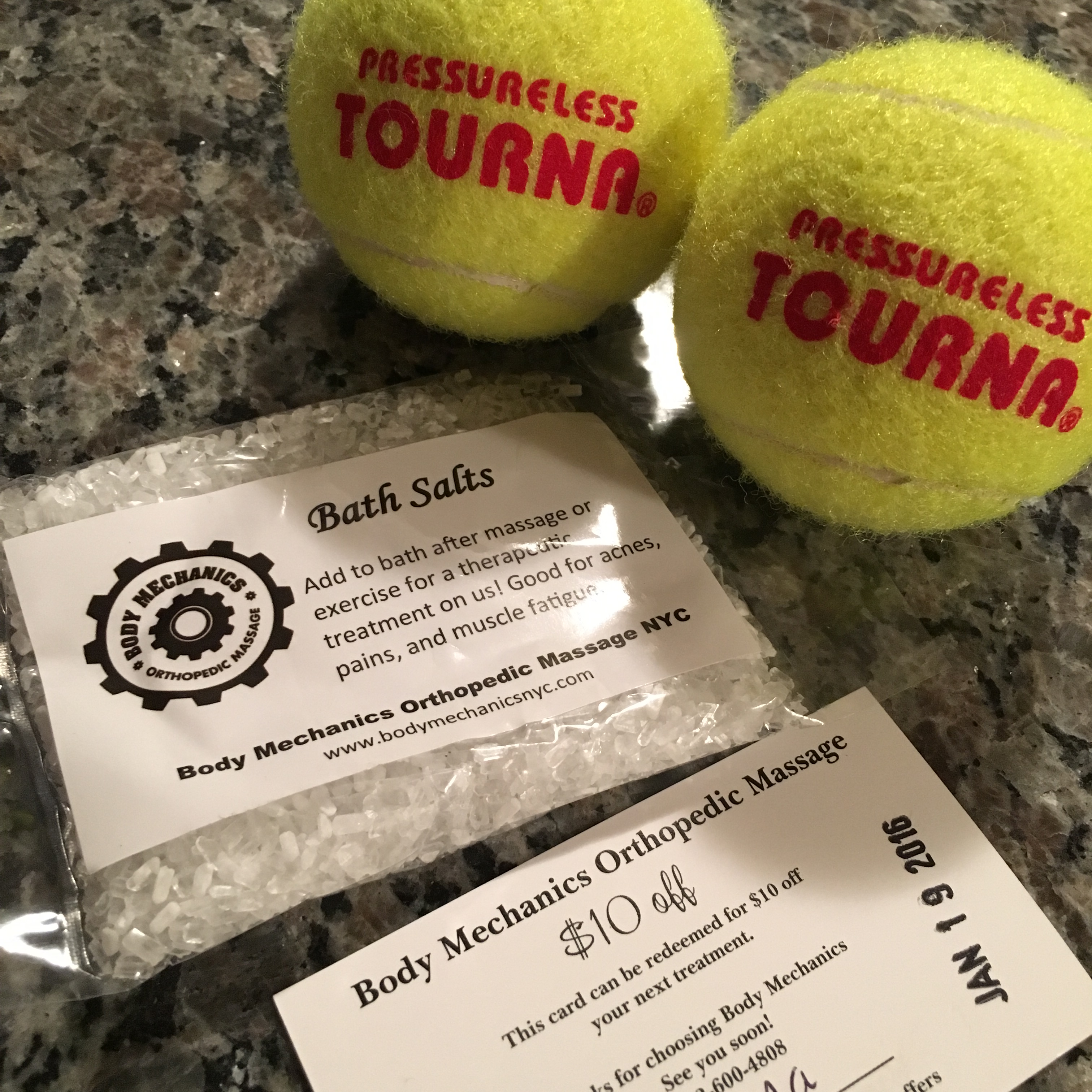 I also mentioned that I still have numbness on the outside of my left shin where I had my ACL surgery – she massaged deep into that area, and even taped my leg up before I left. 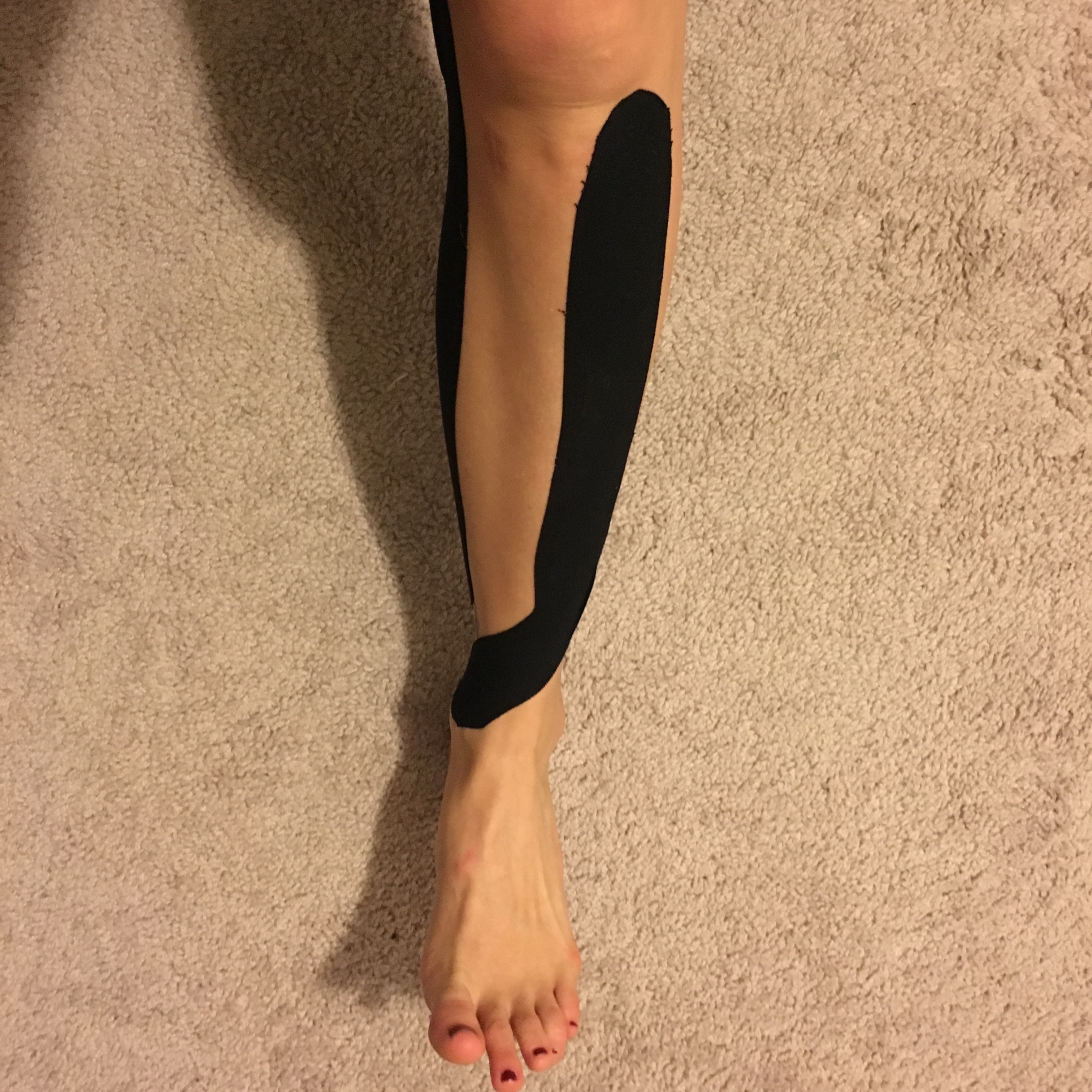 I wish I could bring this place back to Ohio – seriously so, so amazing. I am already planning my next trip back in March for the United Half Marathon (Starting in Central park, through Times Square, and ending near Wall street), and am scheduling an appointment immediately following the race.

After the massage, I ran to grab a quick lunch with an old highschool friend I hadn’t seen in almost 10 years. It was a nice last-minute get together, and it was so great to chat and catch up! 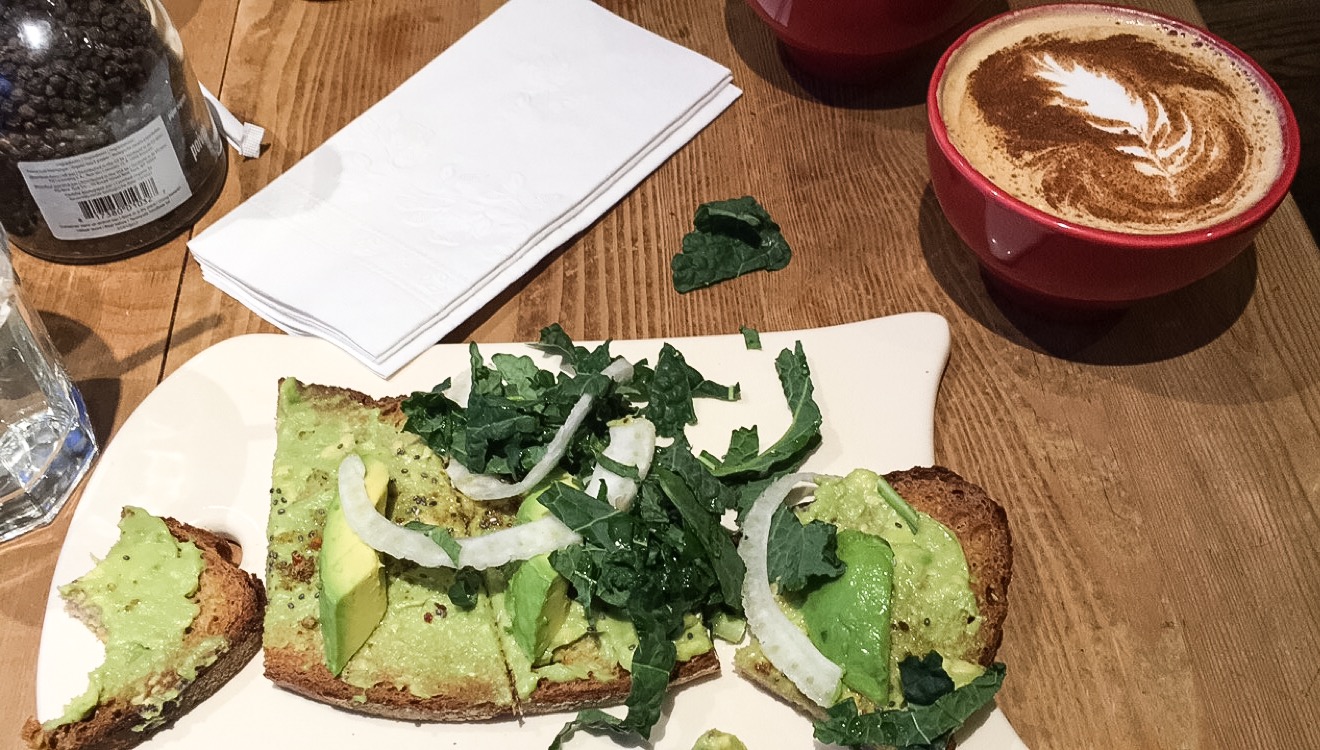 We ate at Le Pain Quotidien, and both got a latte and avocado toast (basically my entire weekend in a nutshell).

Afterwards, I stopped at Grand Central for a sec, since my shuttle was running late, and grabbed some food for later (Laguardia seems to lack any good places to eat).

Unfortunately, I arrived at the airport at 3, and my flight was delayed several times. 4 gate changes later (including leaving the terminal to go to another one, then shuttling back to the same gate one 1 hour later), we were finally jetting off around 10 pm, arriving back home to columbus around 11:15. 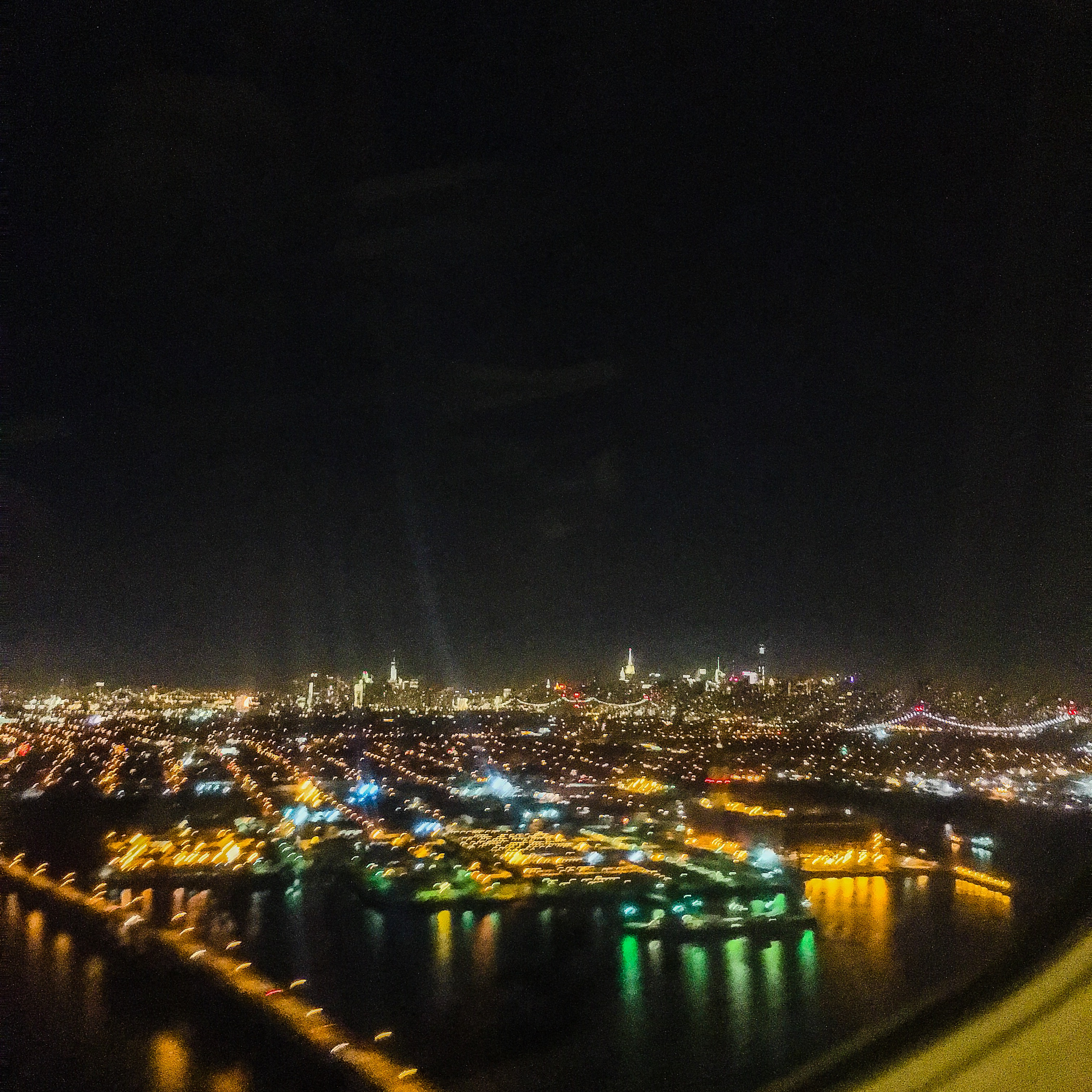 The following morning, I tried to get up for a 5:30 am workout class (I know, I am crazy), but ended up sleeping in a bit longer. This weekend wore me out, and I am looking forward to having an entire day (CHRISTMAS!) to relax and sleep in!

If you have made it to the end of the post, thank you for sticking it out and reading about my adventures! I love sharing my travels & adventures with everyone in hopes that it helps fellow travelers/athletes/yogis… or simply puts a smile on someones face!

Did I miss eating at any staple restaurants or touristy-type things to do while in NYC?