A few weeks ago, I spent an entire weekend attending a workshop with Kino Macgregor. And it.was.amazing! I learned so much in such a small amount of time, and I am still trying to absorb it all. It was my first time ever taking an Ashtanga class, and I ended up loving it! It was tough, not just physically but also mentally, which is right up my alley. I think one of the things I felt that was missing from my Yoga teacher training, and even just taking yoga classes in general, is the correct alignment and anatomy of the body while doing poses. I am ALL about details, and Ashtanga is amazing for learning them. I felt like such a newb, as my original thought on this type of practice was that it is too rigid and boring. Fortunately, perceptions and beliefs are always subject to change 🙂

Note: for those who don’t know what Ashtanga yoga is, below is a description found on the Ashtanga Yoga Columbus website:

The Ashtanga system is designed to purify the body, promote proper functioning of the digestive system, build strength, and restore range of motion to the body. The method of practice taught in Ashtanga Yoga relies on linking postures with deep, even breathing and steady gazing with the eyes. The system of linking the breath with movement is known as vinyasa and encourages the blood to circulate properly allowing the removal of unwanted toxins. The gazing point helps to facilitate a state of meditation, having a profound effect on the steadiness of the mind.

Yoga on High hosted Kino MacGregor, which they do every year. There was a series of classes: 1 on Friday, 2 on Saturday, and 2 on Sunday.

Friday night, we learned all about Sun Salutation A… I could not believe how much detail went into the movement and positioning of the arms, shoulders, hips, stomach, etc. I felt like I needed to take an entire course on how to do this beginning yoga sequence!

Saturday morning, I took my first Primary Series Class… and it kicked.my.butt. By the time I came back from the afternoon break, I didn’t think I could even lift my arms!

Saturday afternoon was all about handstands. I always love taking handstand workshops, as I eventually want to put on my own (hopefully by the end of the year.. stay tuned ;)). With barely any arm strength left, I was able to make it through this workshop with a lot more understanding of body positioning while upside down. And, I even got to snap a pic with Kino herself – she really is awesome! 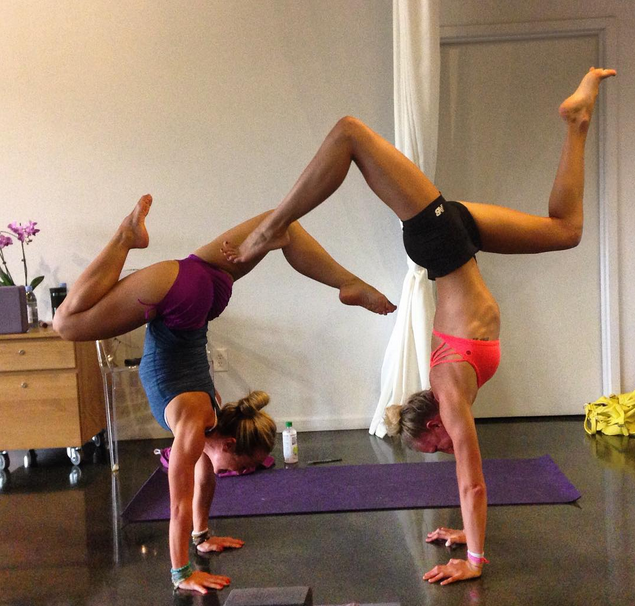 Sunday morning I had to teach MY yoga class, so I unfortunately missed the Mysore class. But, also a relief, because I could barely move my body after Saturday’s classes.

The Sunday afternoon class was all about twists – how to move your body to actually get into a twisted pose, and how to go deeper. So. Much. Information. It was AMAZING. I even designed my yoga class the week after around twists – that’s how much I learned! I didn’t realize it, but I don’t really do much twisting poses in my own practice… So learning new poses and being able to actually do them after being walked through the steps to do it – awesome.

After taking the weekend workshop, I have been dying to take another Ashtanga class. Not because I want to teach it – I love my power vinyasa flow classes! – but because I want to learn how to properly move my body and do the poses correctly. I would sit through a 2 hour class every day just to learn more about the anatomy of the body & detailed descriptions of how to get into poses!

Anyways -since my schedule has been so busy at work, I have been trying to take a Mysore Ashtanga class for beginners – and I finally got the chance to go the other day. I went to Ashtanga Yoga Columbus – a studio fully dedicated to the traditional Ashtanga practice. The studio is small – only 1 room, tucked away on the second floor with a few other businesses. It is perfect for a Mysore practice, where students come in for their self-practice and can be helped as needed. There were 2 instructors that walked around, helping the new students as well as veterans. I felt very comfortable, and the instructors were great at explaining the poses. I never felt judged, or like I was doing anything incorrect – it was a big, open space, and everyone was just doing their own thing.

The first half of the sequence was broken down in parts, so whenever I finished, an instructor would come over and show me the next set of poses I needed to do. I spent an hour practicing, and it was the perfect amount of time. Unfortunately, My work schedule has been a bit crazy (60-70 hours a week, can I get a nap??), so it’s almost impossible to get there when you work at 7 am until 9 pm at night… buuuut, I am trying to learn more of the the Ashtanga primary series before my next class so I don’t have to rely on the instructors.

So for those who have never done Ashtanga Yoga before, I recommend heading out to Ashtanga Yoga Columbus and taking a beginner Mysore class – it is a great workout, and very meditative since you are focusing on your breath the entire time (5 breaths per pose!). Very different from the heated power flows that I normally do – no heat, its just holding a series of poses, and it can take 1-2 hours to complete the practice. A little more rigid, but definitely worth a try! Has anyone else tried Ashtanga yoga? What are your thoughts? I would love to hear!