3 years ago, I created a bucket list. And on that bucket list, I wrote “Ride on an elephant in Thailand.” I also cut a picture out of a magazine and stuck it to my wall as a constant reminder that I would make it happen – and guess what. It. Actually. Happened! I had no idea HOW it would happen, but the universe works in funny ways.

Less than 1 year ago, I traveled to NYC for a Yoga workshop & met my now- very good friend Heather, and we connected through instagram. We met up in March for my half marathon in NYC, and she invited me to Thailand for a yoga retreat in September. 5 months later, we were on our way – she researched & planned an elephant trek during our week in Thailand, and is literally the reason why my dream has manifested… I am forever grateful for her!! 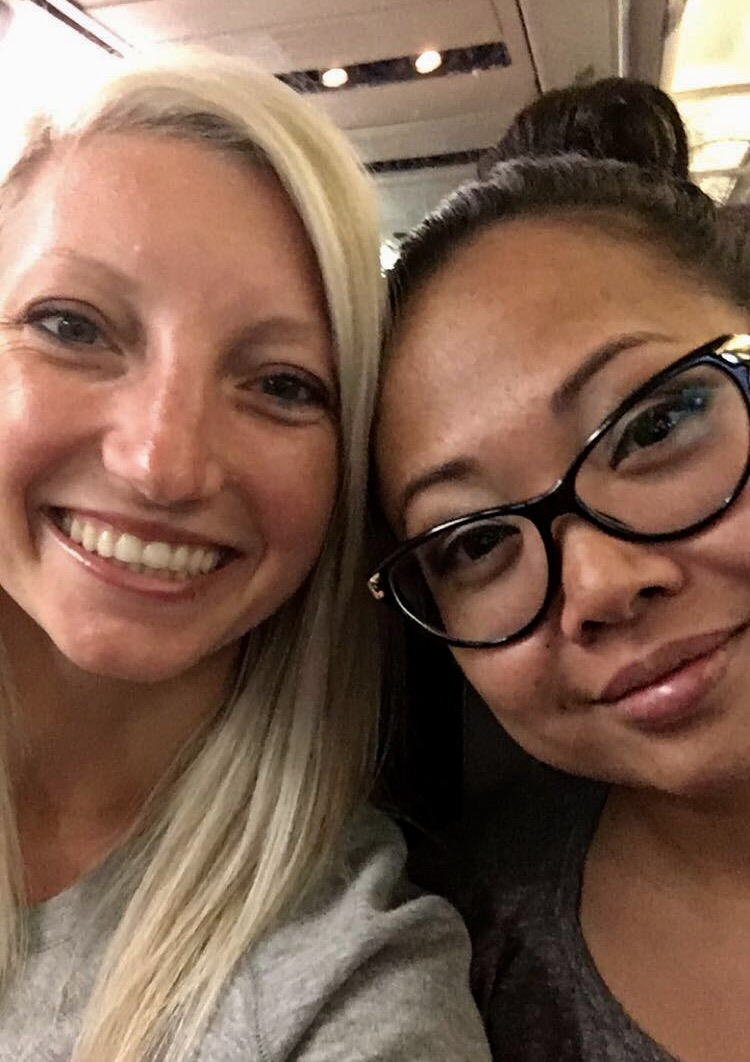 Upon landing in Thailand, we dropped our bags off at the airport with the staff from Pimalai Resort (where the yoga retreat was being held), and we hailed a cab to grab some food before being picked up for the elephant trek. 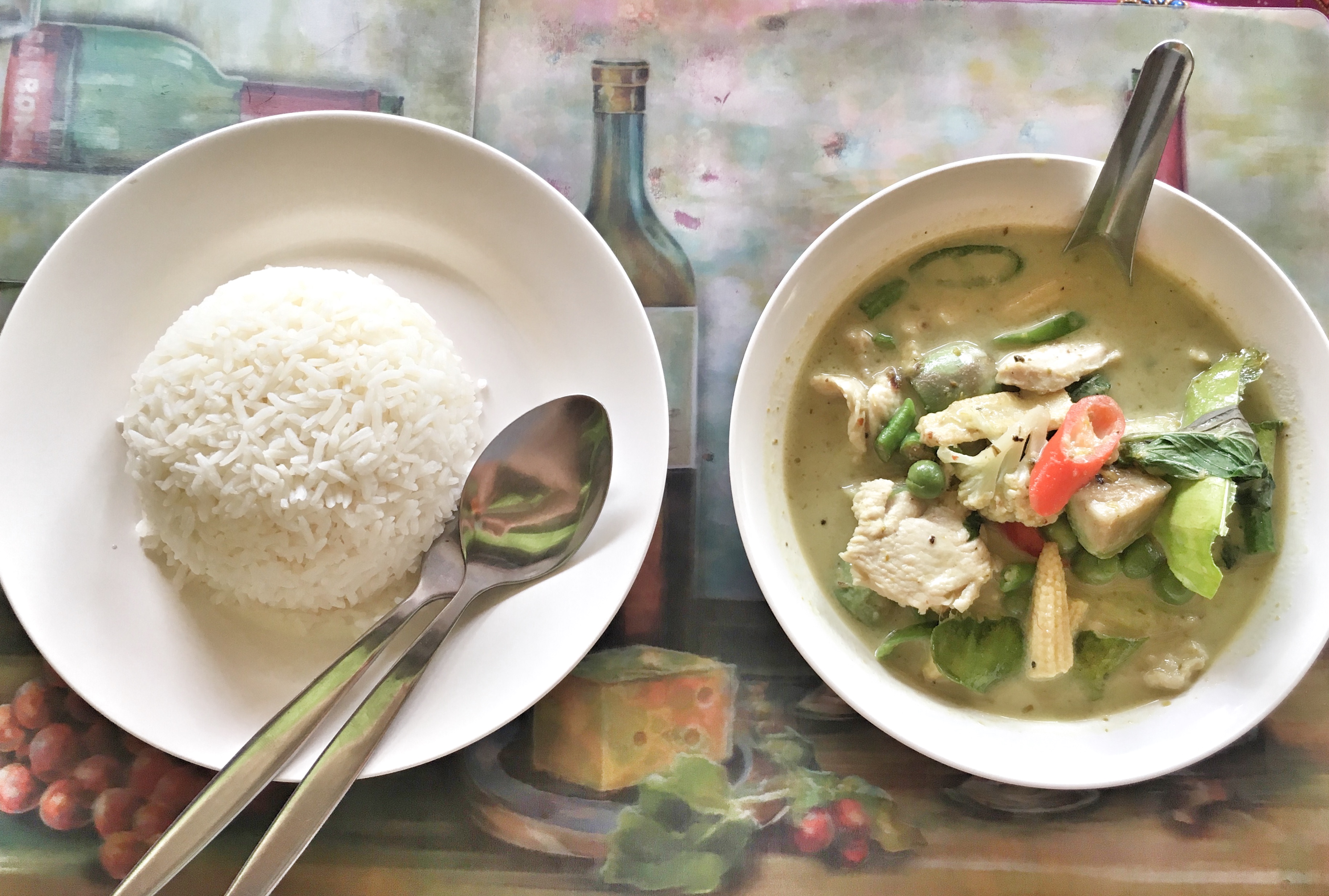 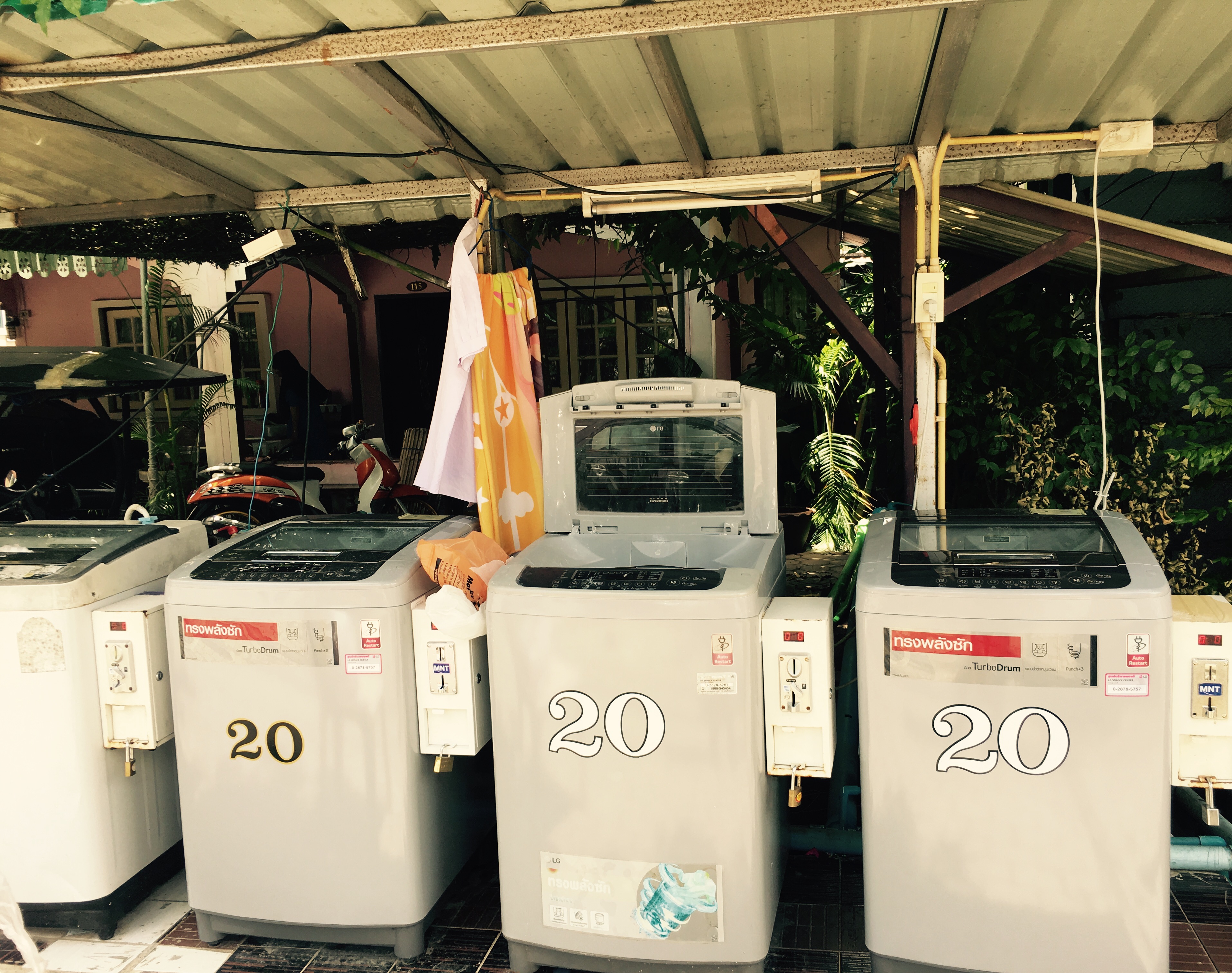 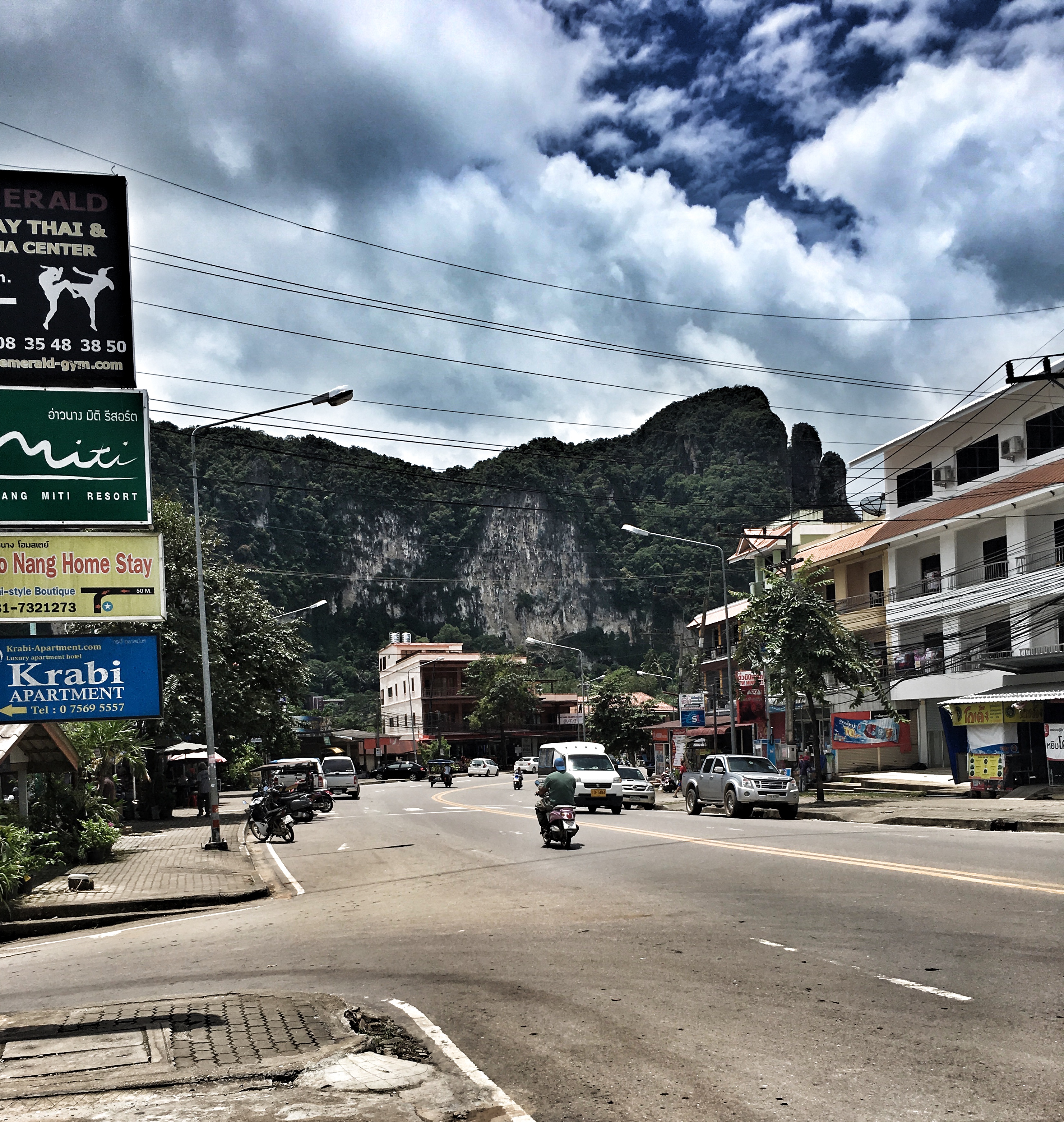 Around 2 pm, we were picked up by Your Krabi for an Elephant Trekking & Waterfall Tour (Total Cost = 900 Baht, or $25 US!). There was a total of 6 of us – 2 friends from Turkey on holiday from school, and a couple from the UK who quit their jobs to travel for a while. 45 minutes later, and we arrived at the foot of Phanom Bencha mountain, ready to hang with some Elephants 🙂

My friend & I climbed a set of stairs into a tree house, which was necessary since the elephants were so big! We removed our flip flops so they wouldn’t fall off, and then mounted our elephant. There was a 2-seater chair on top of the elephant, which had several blankets layered underneath so nothing was digging into his skin. 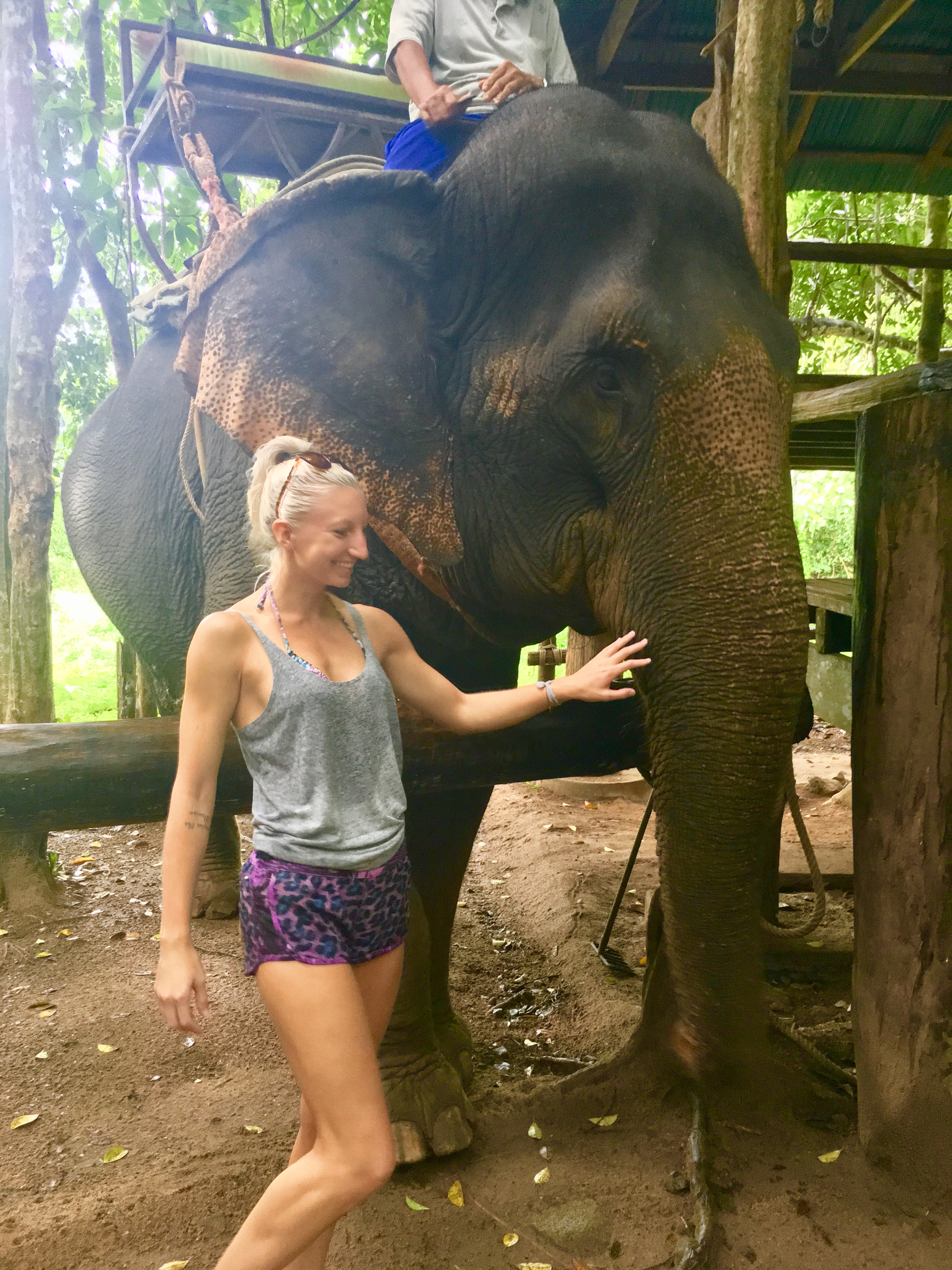 Unfortunately, it started to rain, so we were cold, wet, and in dire need of some hot chocolate. However, the actual trek was so, so amazingly beautiful, which completely made up for the weather! Our elephant was the oldest of the bunch – over 60 years old – and he liked to stop and eat every 3 minutes. He only ate 1 type of plant, so we had to stop every time he saw it… even if it was really high up. When the food was really high up, our elephant would get up on his hind legs, and we had to realllly hang on to our seat so we wouldn’t fall off! 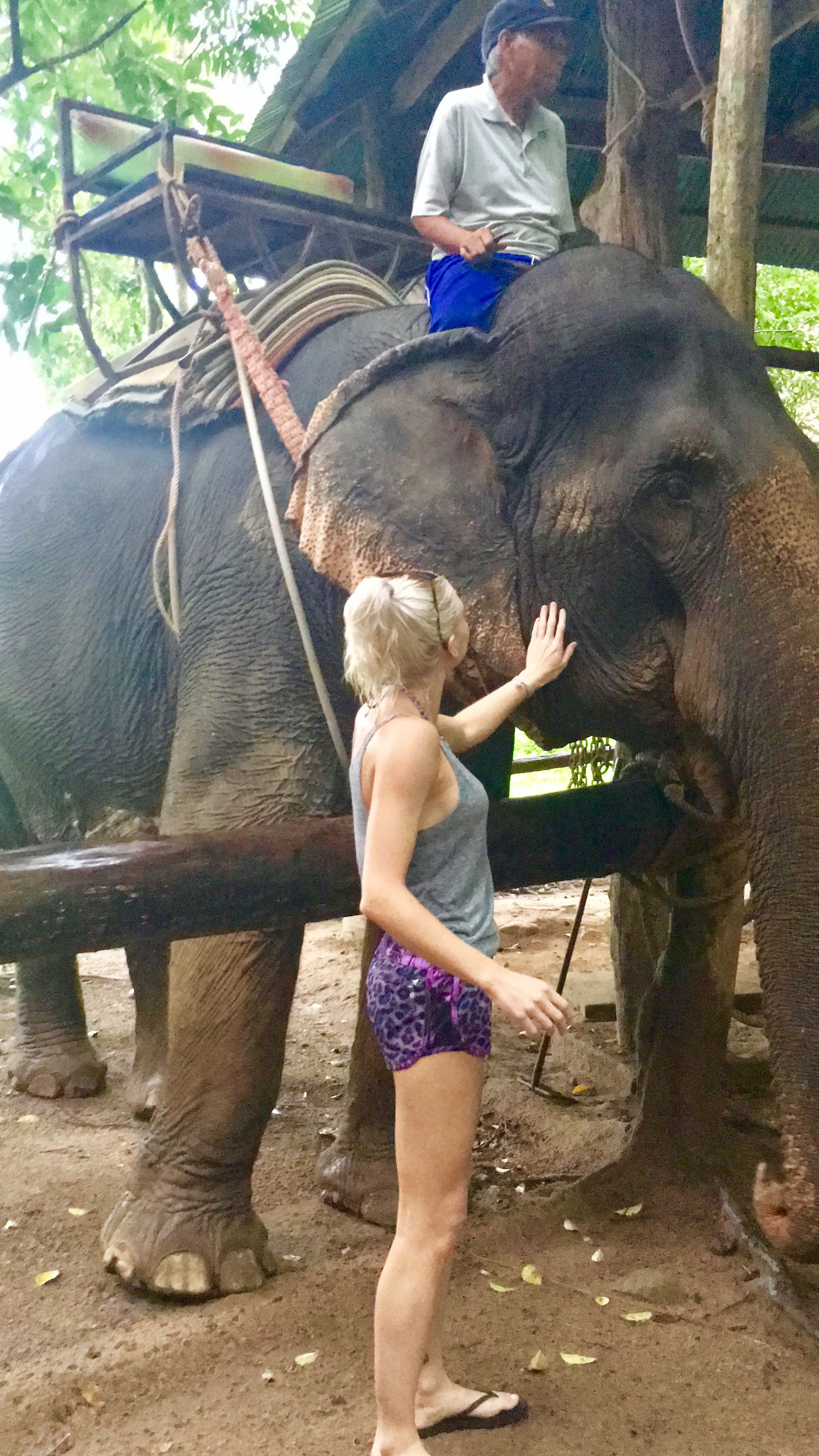 The trek lasted less than an hour, and we were guided through a river with mini waterfalls.. absolutely beautiful! Since it was raining, I didn’t get many shots while riding the elephant… buuuuut, many were taken of the baby elephant later on!

After the adult elephant ride, we fed them some bananas and sent them on their way. Next up: bathing a baby elephant. First, our 6 year old baby elephant came out and performed a few tricks for us – playing the harmonica, basketball, and even putting a hat on our heads… he was adorable! 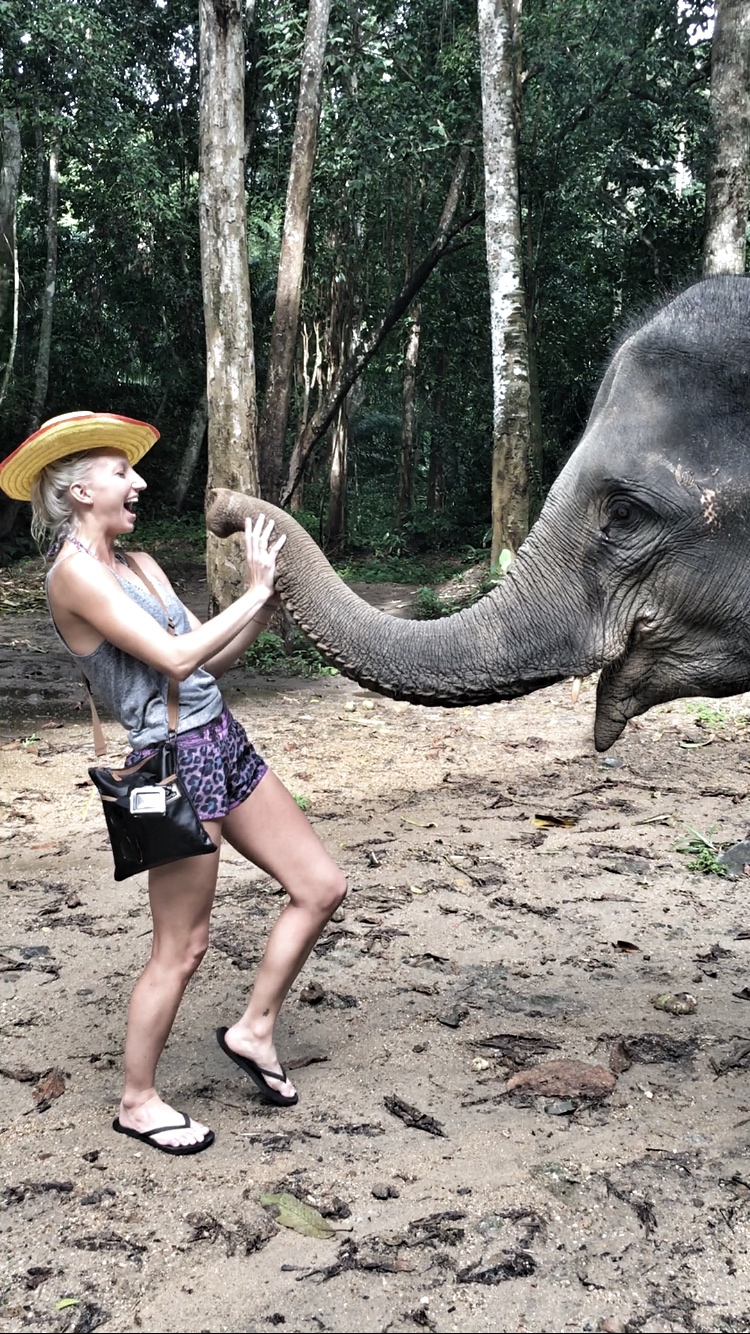 Just look at his little fuzzy head of hair!!!

Then came the fun part… actually getting in the water with the baby elephant! We were given brushes to brush the elephant, and he loved it! Elephants make this weird purring noise, and it is totally adorable! 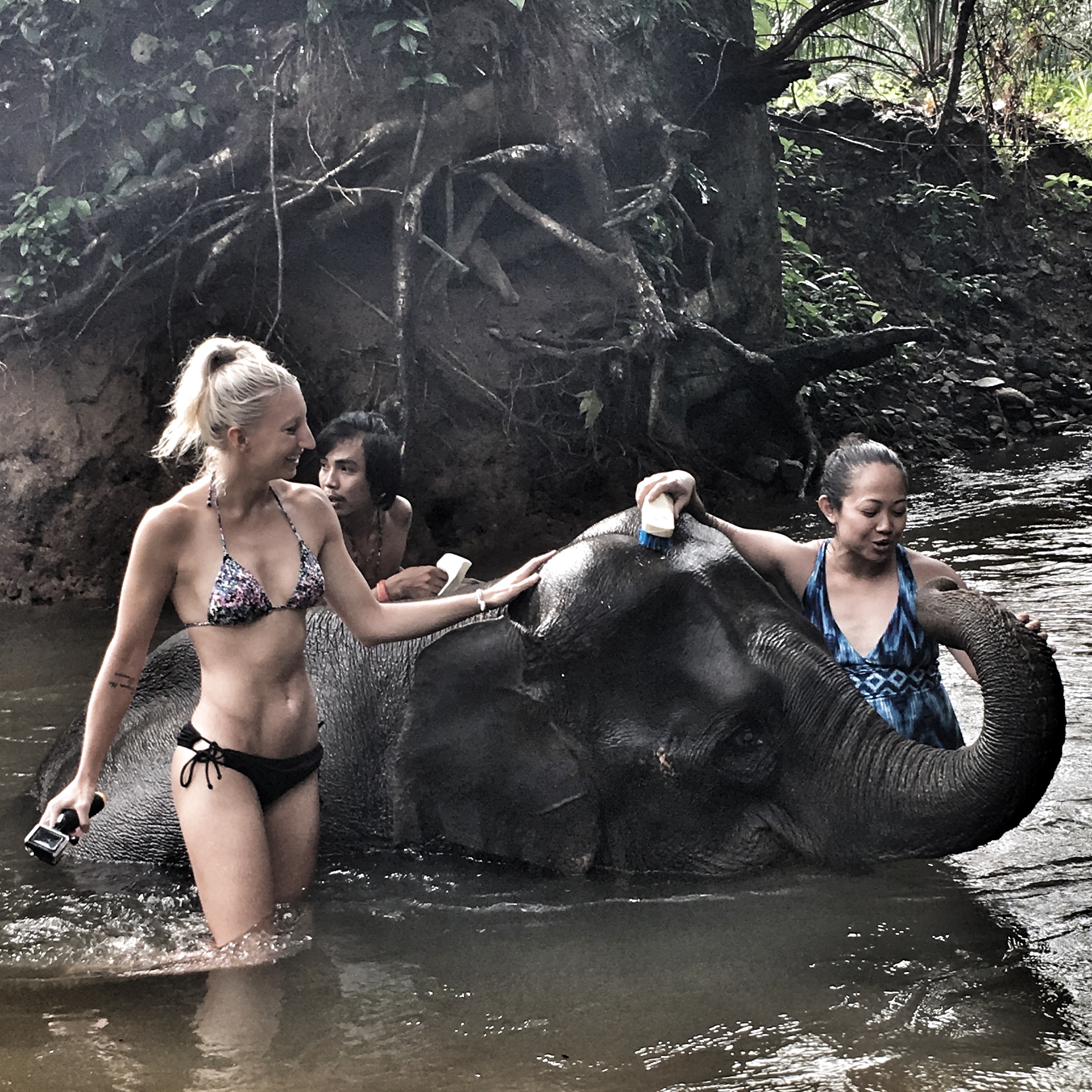 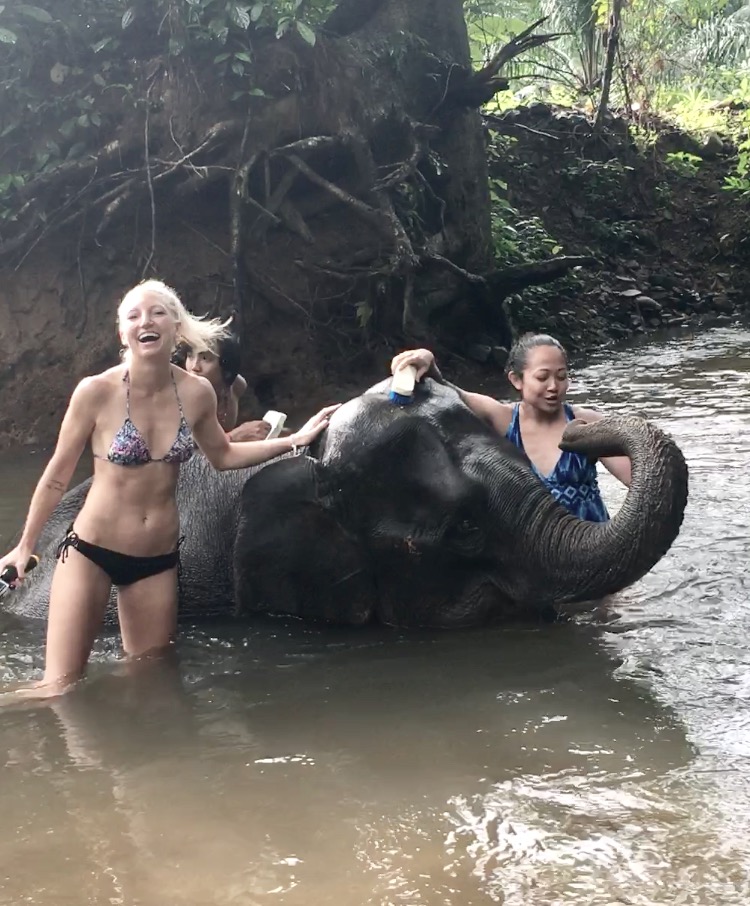 The baby elephant was so playful, and he loved being in the water! After a little bit, he sunk lower in the water and let me climb on his back, then kept trying to reach his trunk up to touch me! 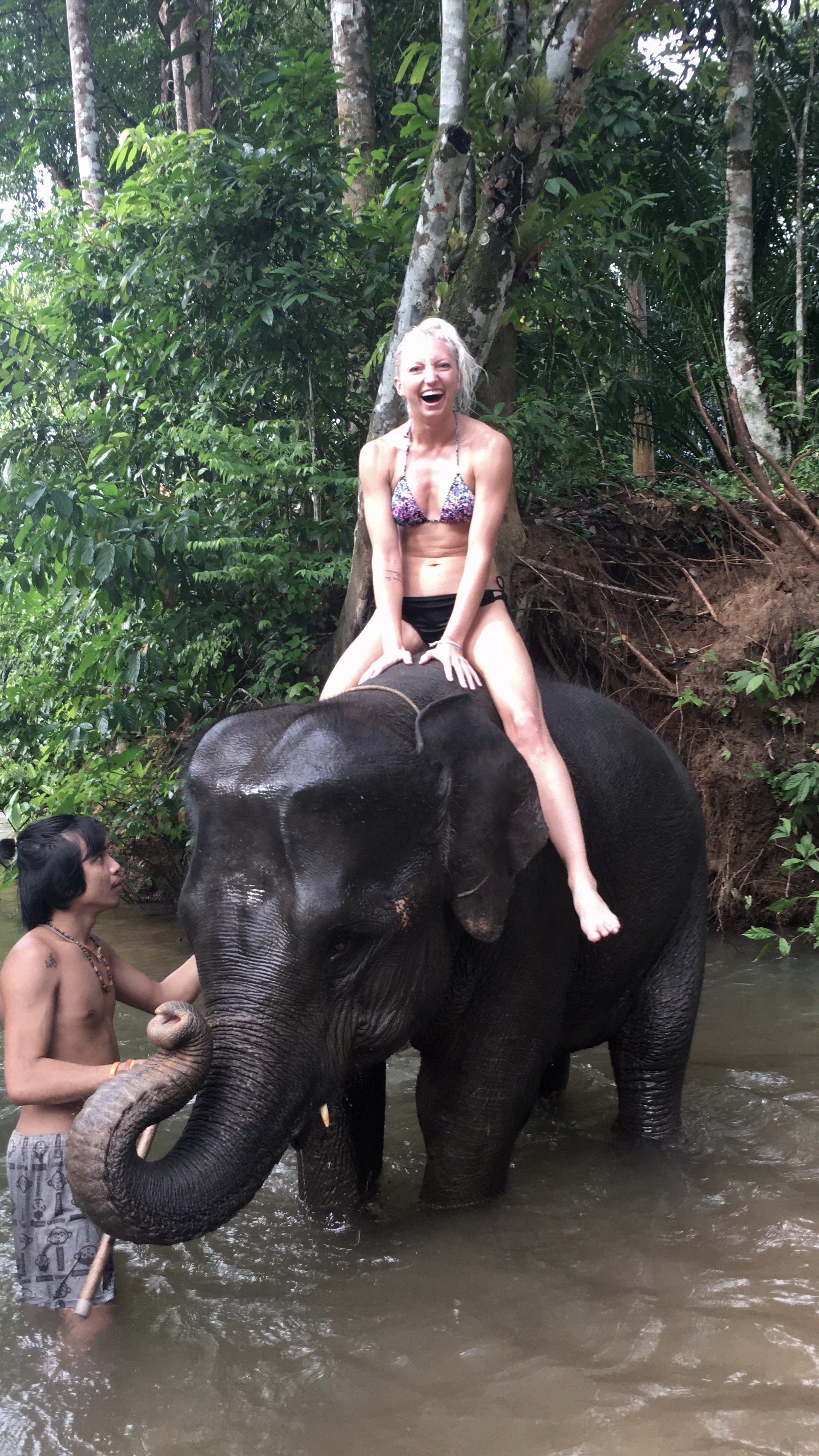 An elephant’s skin is pretty rough/course, and they have these wiry-feeling hairs on the top of their heads, about 1-2″ apart from each other. I couldn’t stop petting the baby elephants head, it felt so weird!

When everyone was done playing in the water with the elephant, we rinsed off & had some fruit to eat before heading back. My Krabi tours was amazing and very accommodating for everyone on the tour – and for $25, you got a lot! Pickup and drop off, a snack, water, 45 minute trek on an elephant, and playing with a baby elephant for another 45 mins.

**Please note – a lot of people are against riding elephants in Thailand, for various valid reasons. My friend researched the company, and My Krabi is one of the very few places that actually treats their elephants really well. A lot of elephants will have purple marks all over them from being hit with a hook, and the ones we rode & played with were mark-free. They were gentle, calm, and seemed very happy! There were a few places along the side of the road in Thailand that showcased riding elephants, and they looked really run down and unhealthy… so make sure to look into the company before riding elephants, because there are a lot of touristy places that don’t treat the animals very well. There are also alternatives to riding elephants, so it just depends on your own beliefs on what you prefer to do.

Overall, I would do this again in a heartbeat! It was a highlight of my time in Thailand, and I my only regret is not being able to stay longer than a week.

Has anyone ever ridden an elephant or wanted to do it? What was your experience? And if you’ve been to Thailand, what was your favorite excursion/part of the country?