Back in October, I flew out to Asia & Europe for 3 weeks. Along the way, I stopped in Barcelona for a few days to tour the city, make new friends, and to do some yoga. With the craziness of non-stop traveling since then + moving to a new state, I finally have some time to sit down and write about my travels!

Spain has been on my Bucket list for a while, and since 2016 was apparently the year to cross off half my bucket list as complete, I thought I’d stop by Barcelona on my way from Thailand to Ibiza. I had 2.5 days before heading to Ibiza for a week of yoga, so I booked my flight, a cheap hostel, and didn’t plan one thing (!). Normally, I plan most of my trips out with a little wiggle room for spontaneity… however, I was way too busy to even think about looking for things to do – I figured once I arrived, the hostel & people staying there would give me some good tips. And guess what – I don’t think I’ll ever plan anything to do on any trip ever again! I had an amazing time exploring the city by myself, getting lost, and meeting some really bad ass people along the way. Below is a recap of my first time in Barcelona – and definitely not my last!

Arrive at Hostel One Ramblas
The hostel was a bit dingy, and it didn’t look like the pictures on their website AT ALL. However, the staff was really helpful and gave me a huge map of the city with recommendations of best places to go. They also do your laundry for a few euros – so I handed the staff a bag full of sweaty yoga clothes and left to explore the city around 10 am. 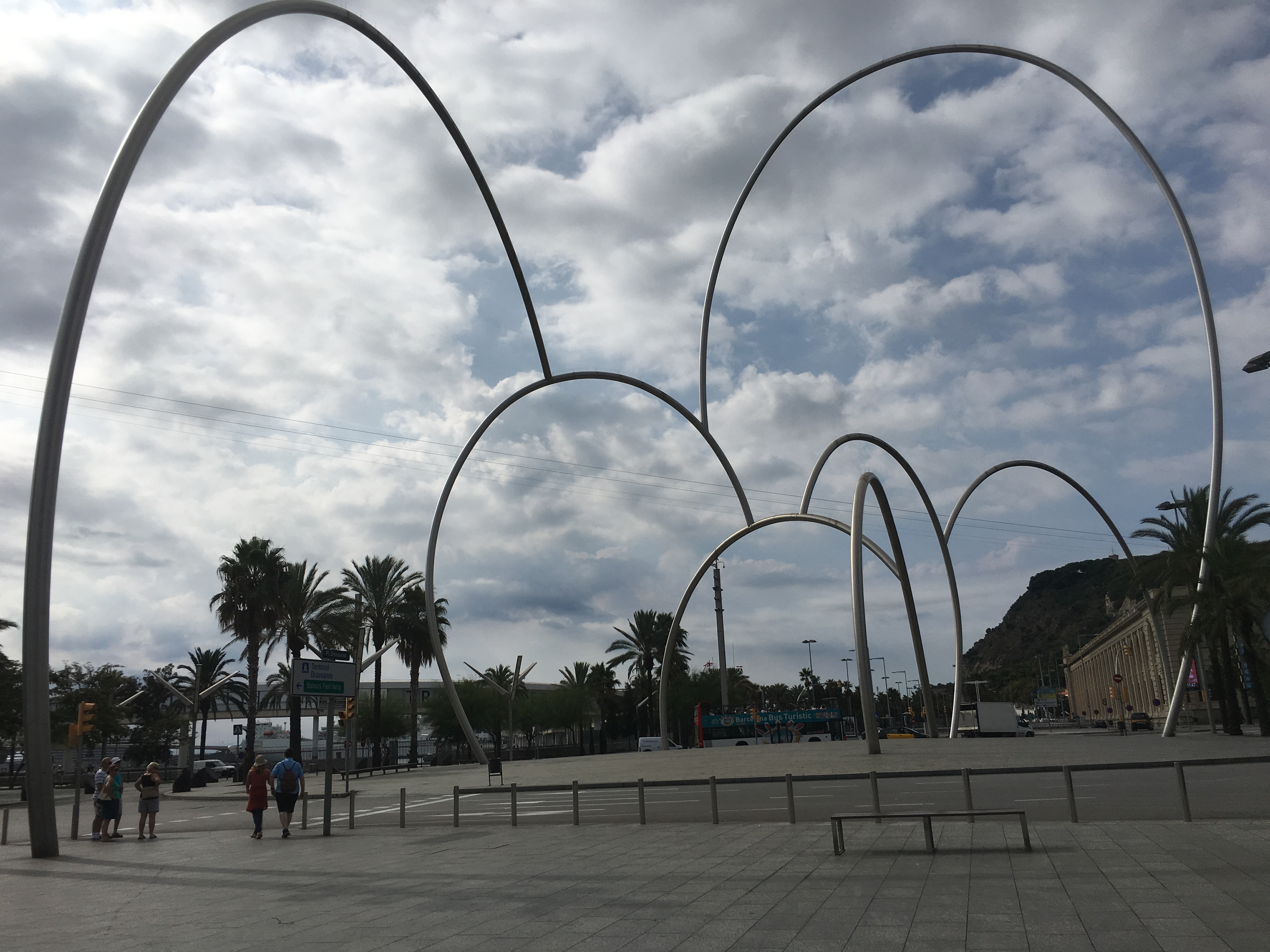 First stop: La Boqueria, because FOOD! La Boqueria is a huge open market in Barcelona, and it is easily my favorite place ever. 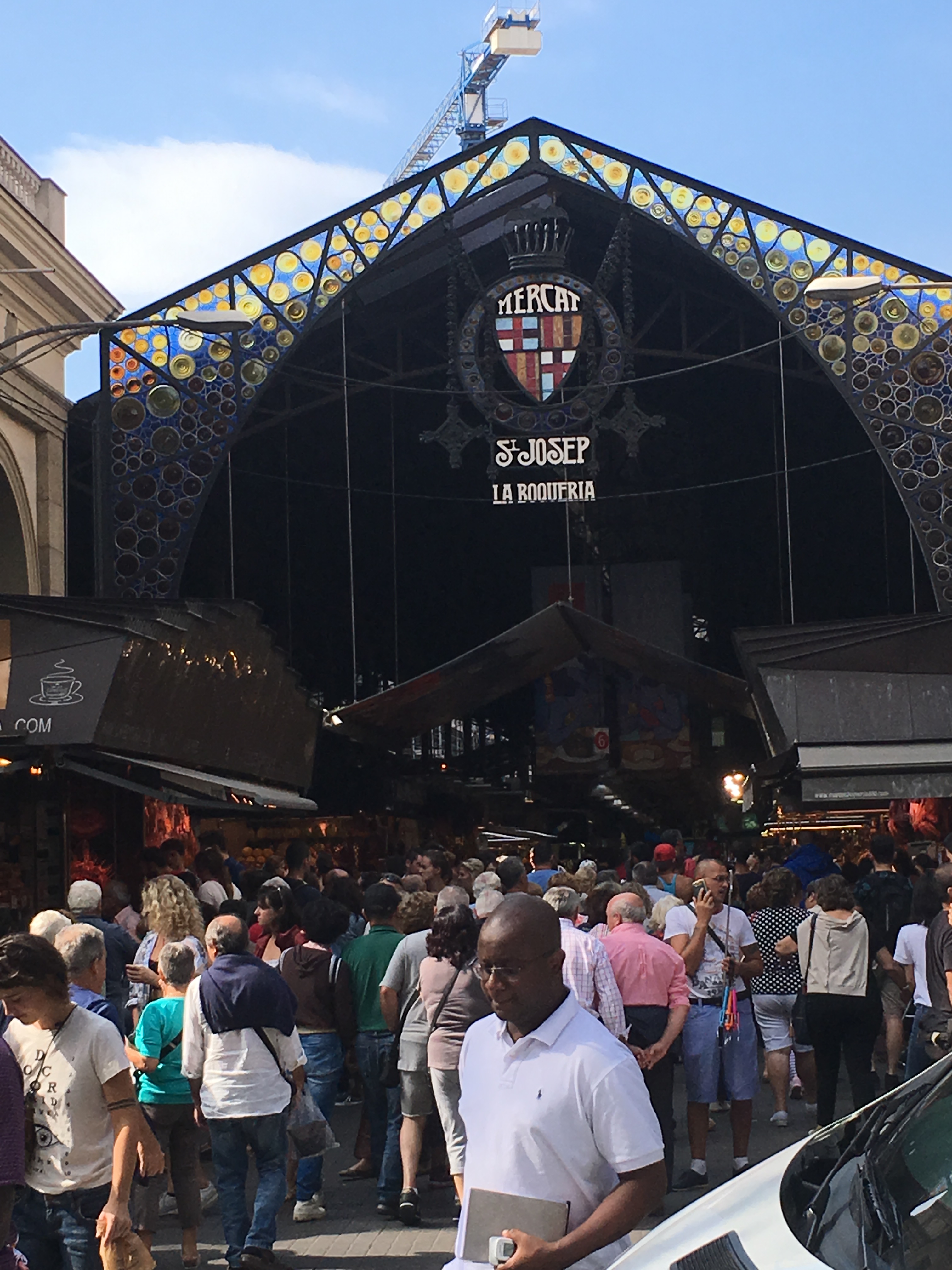 Just look at how amazing and delicious everything looks! 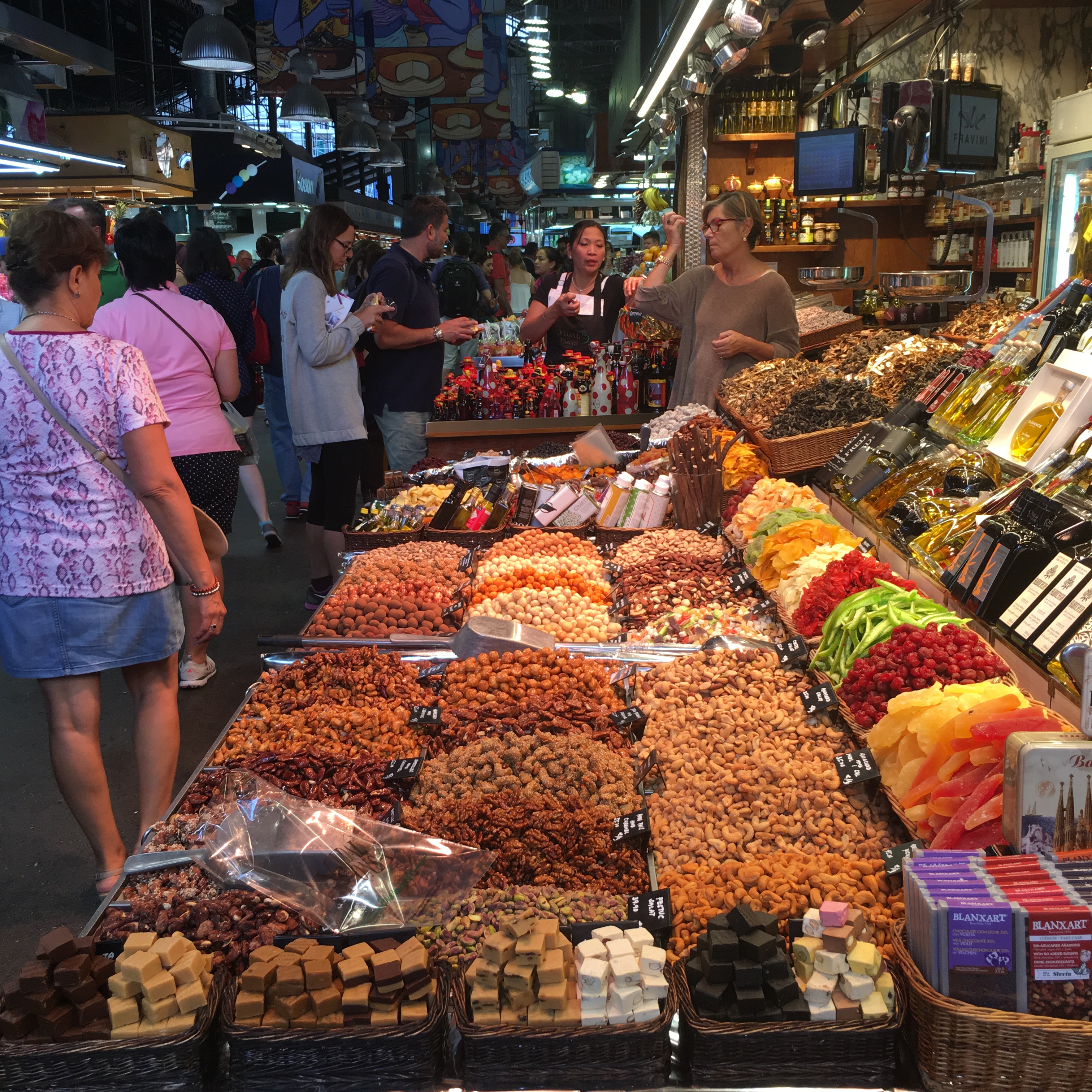 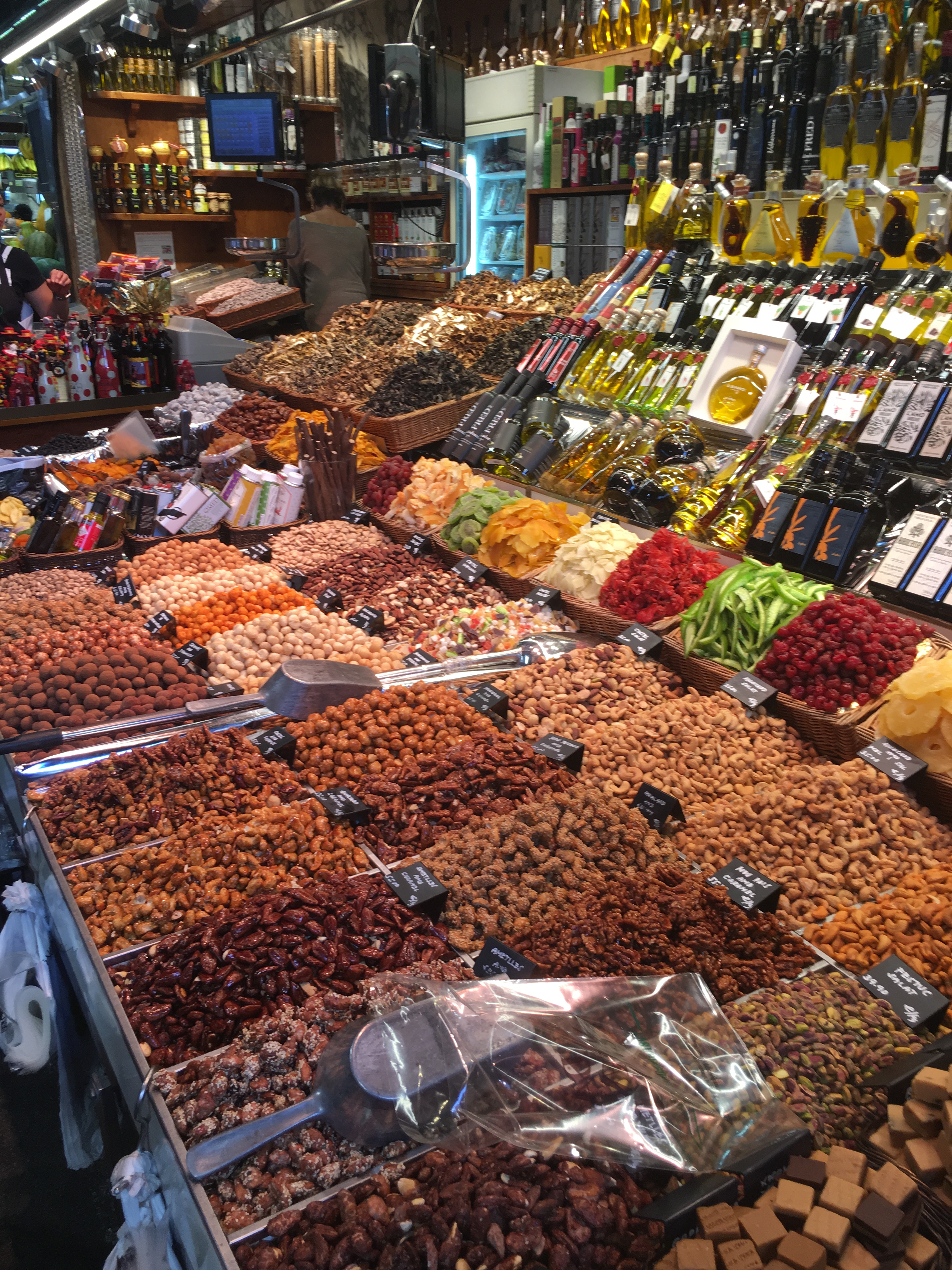 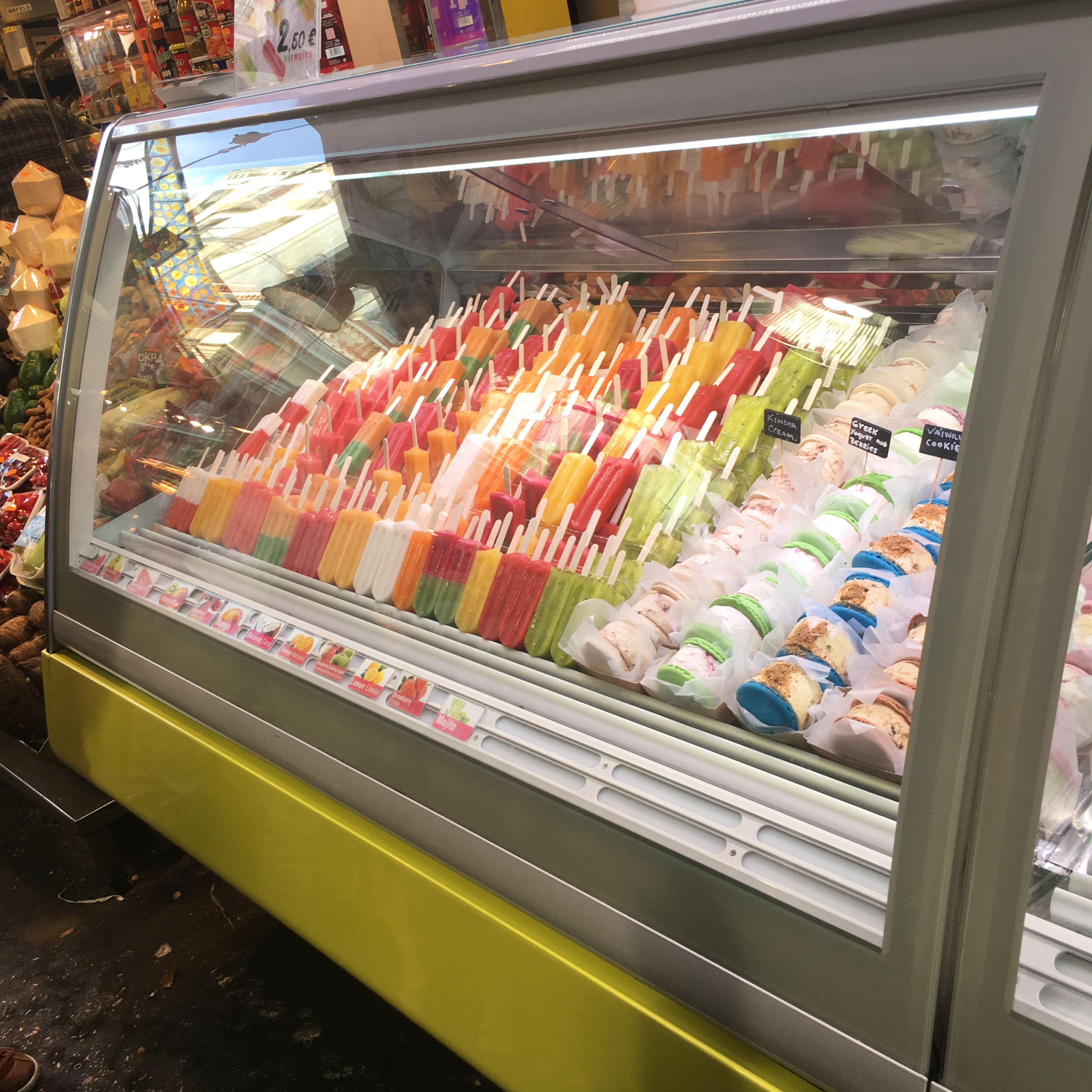 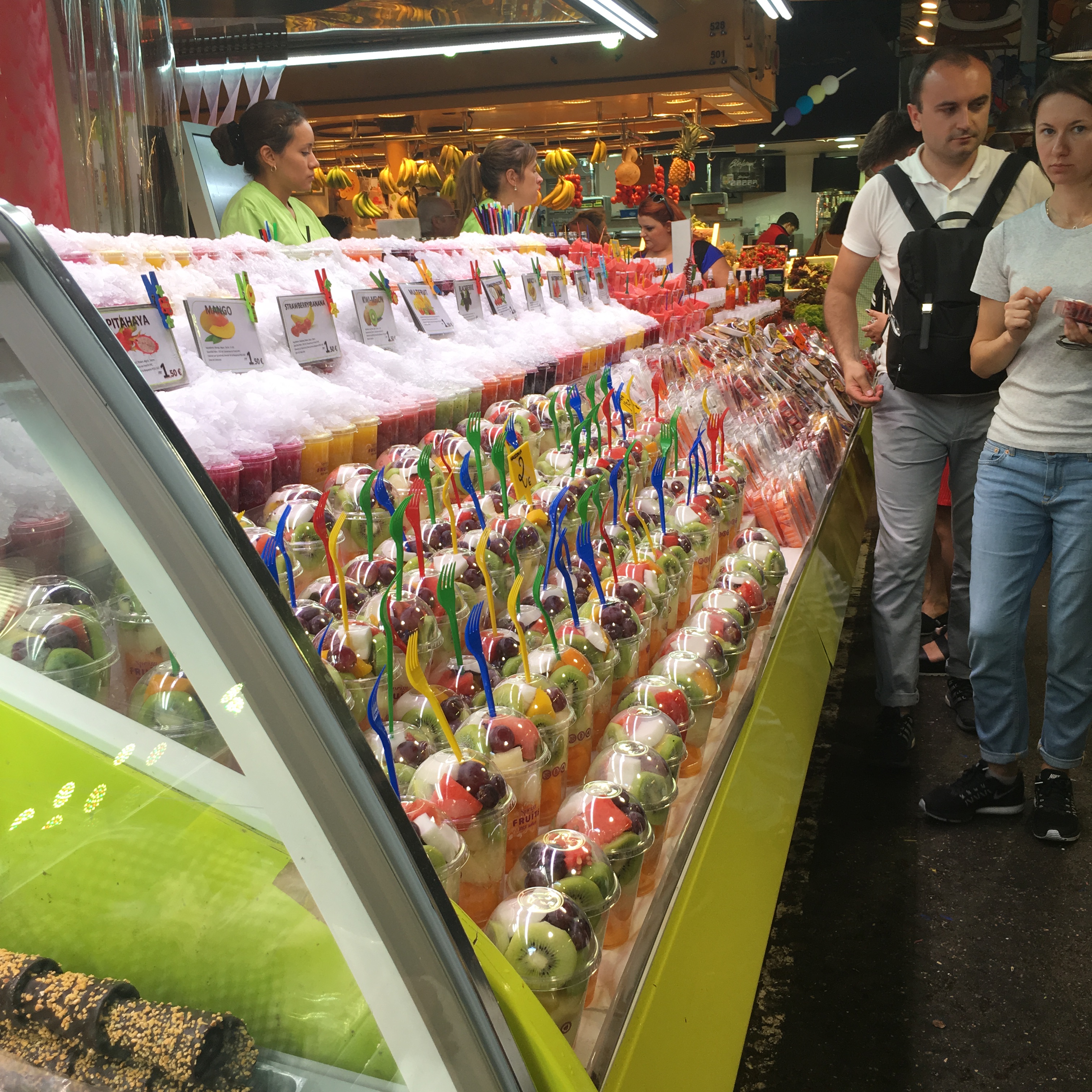 Fresh fruit, fresh baked bread, meats, cheeses, chocolate… I wish I could take this market back to the US! 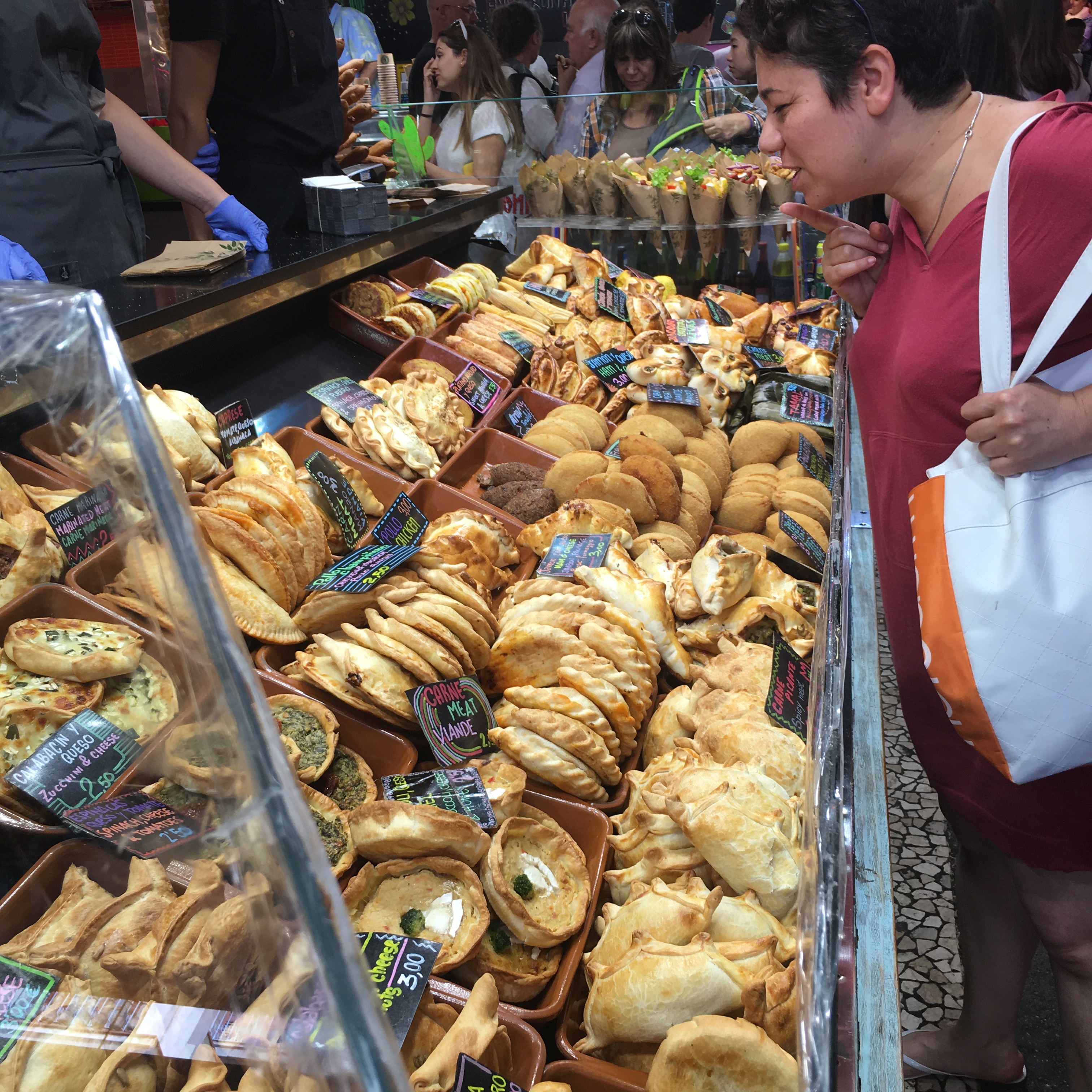 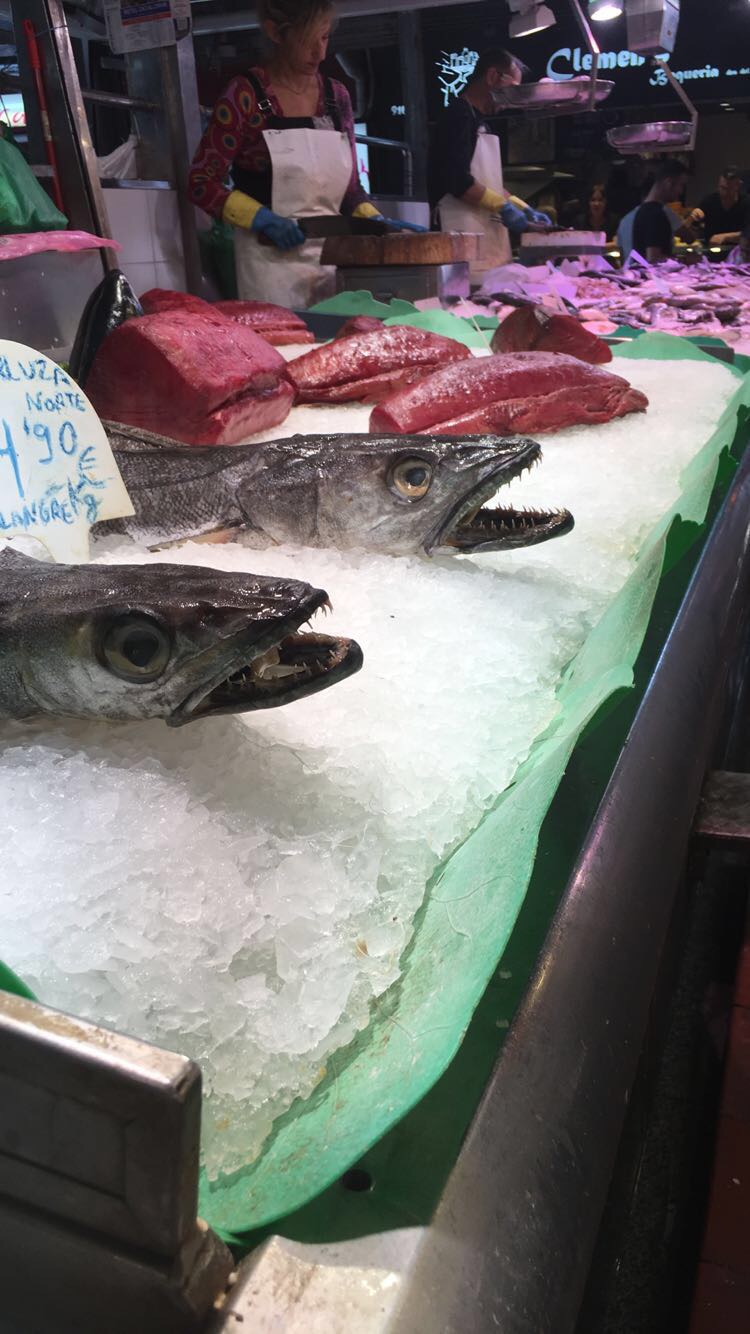 I grabbed a cup of fresh fruit & walked around, then bought some lunch before I left – baked bread filled with meat, mashed potatoes, and rice. So. So. Good. 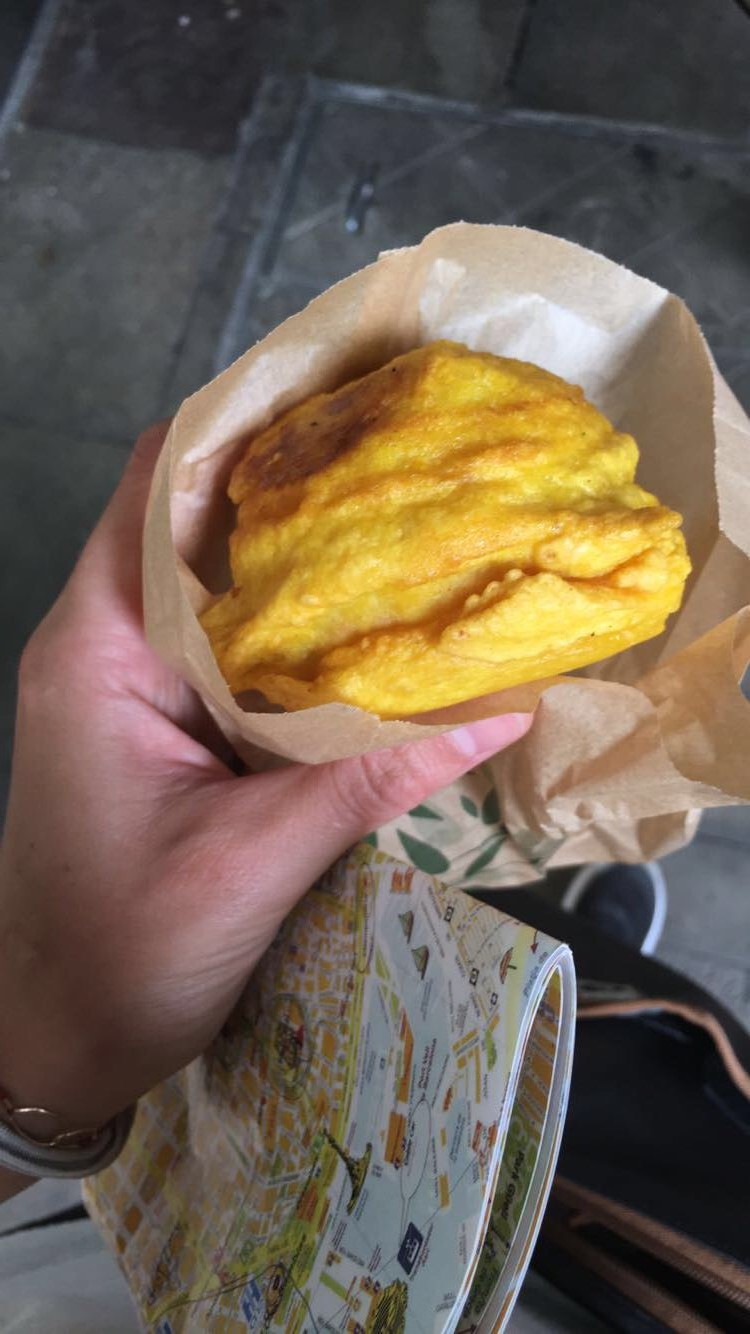 After leaving the market, I wandered down La Rambla and explored different shops + people watched. It was so busy and so easy to get lost! In fact, I did get lost. However, that is the best way to figure out where you are in a new city, right?? 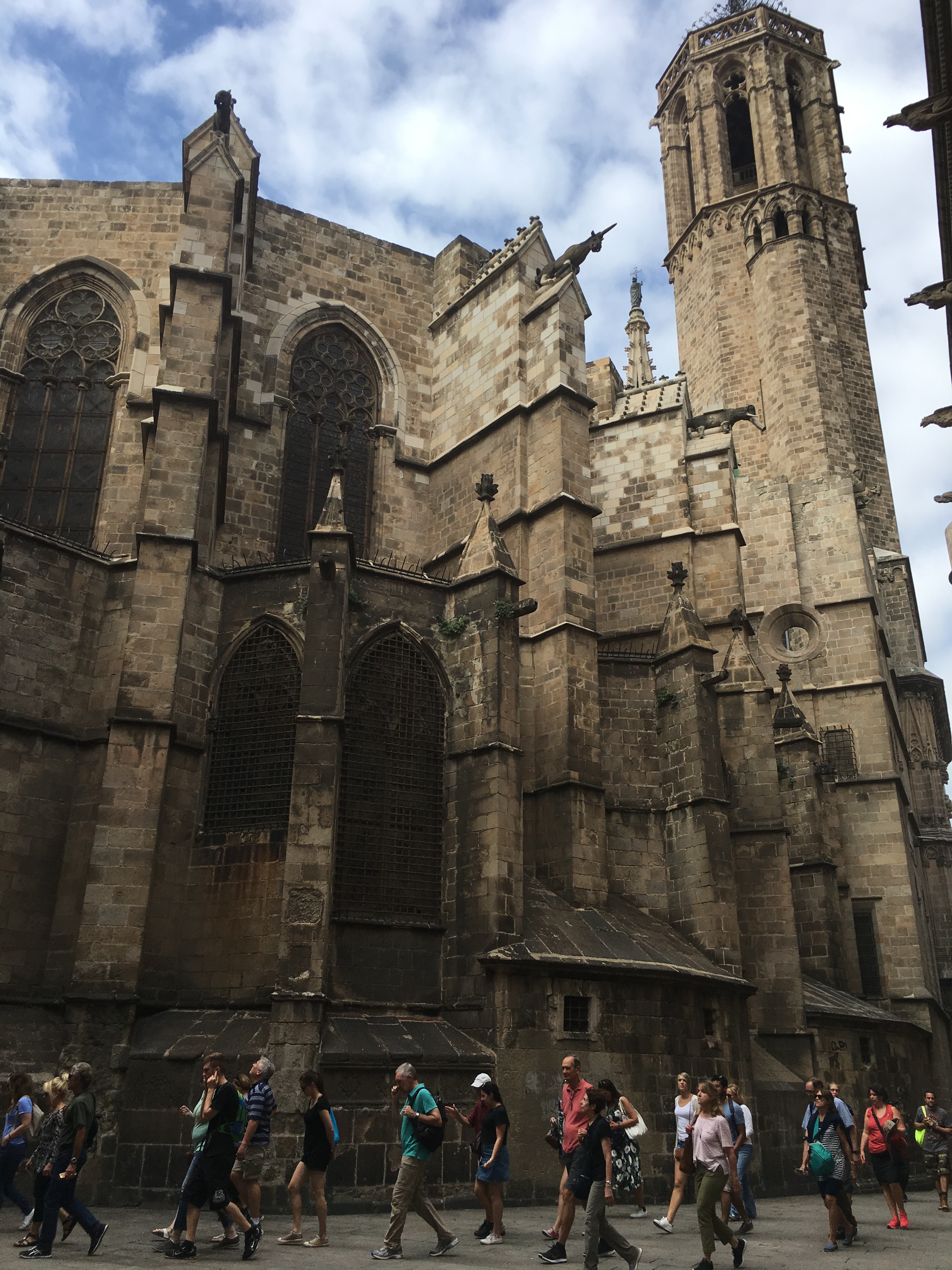 I walked through parks, learned that street names were on buildings (seriously, so confusing!), and eventually made it to the Arc De Triomf. There was a lot of construction going on around it, but it was gorgeous! 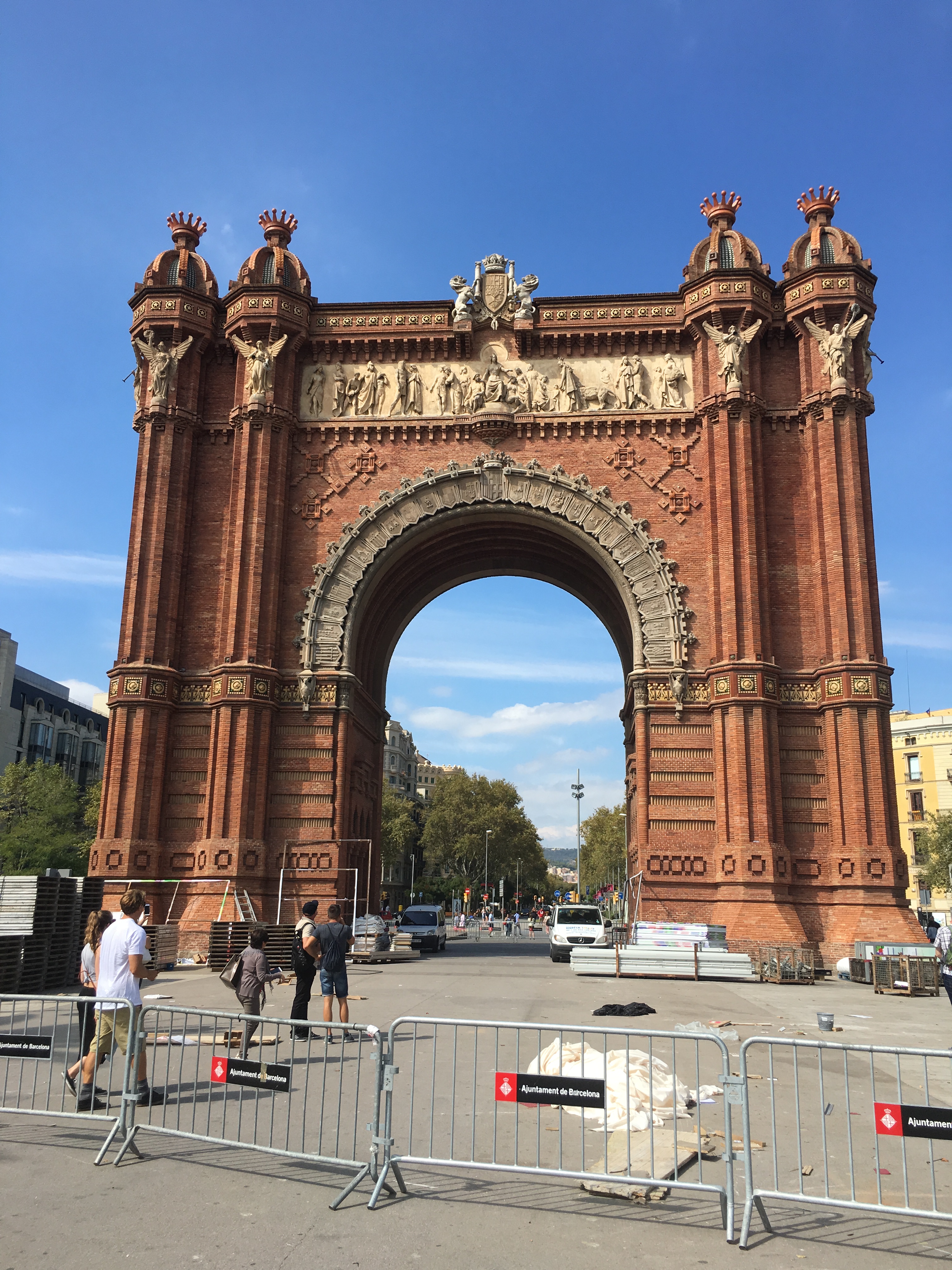 Park de la Ciutadella was nearby, so I headed over there and people watched for a while. There were salsa dancers practicing, people blowing huge bubbles, and couples enjoying romantic boat rides on a pond nearby. 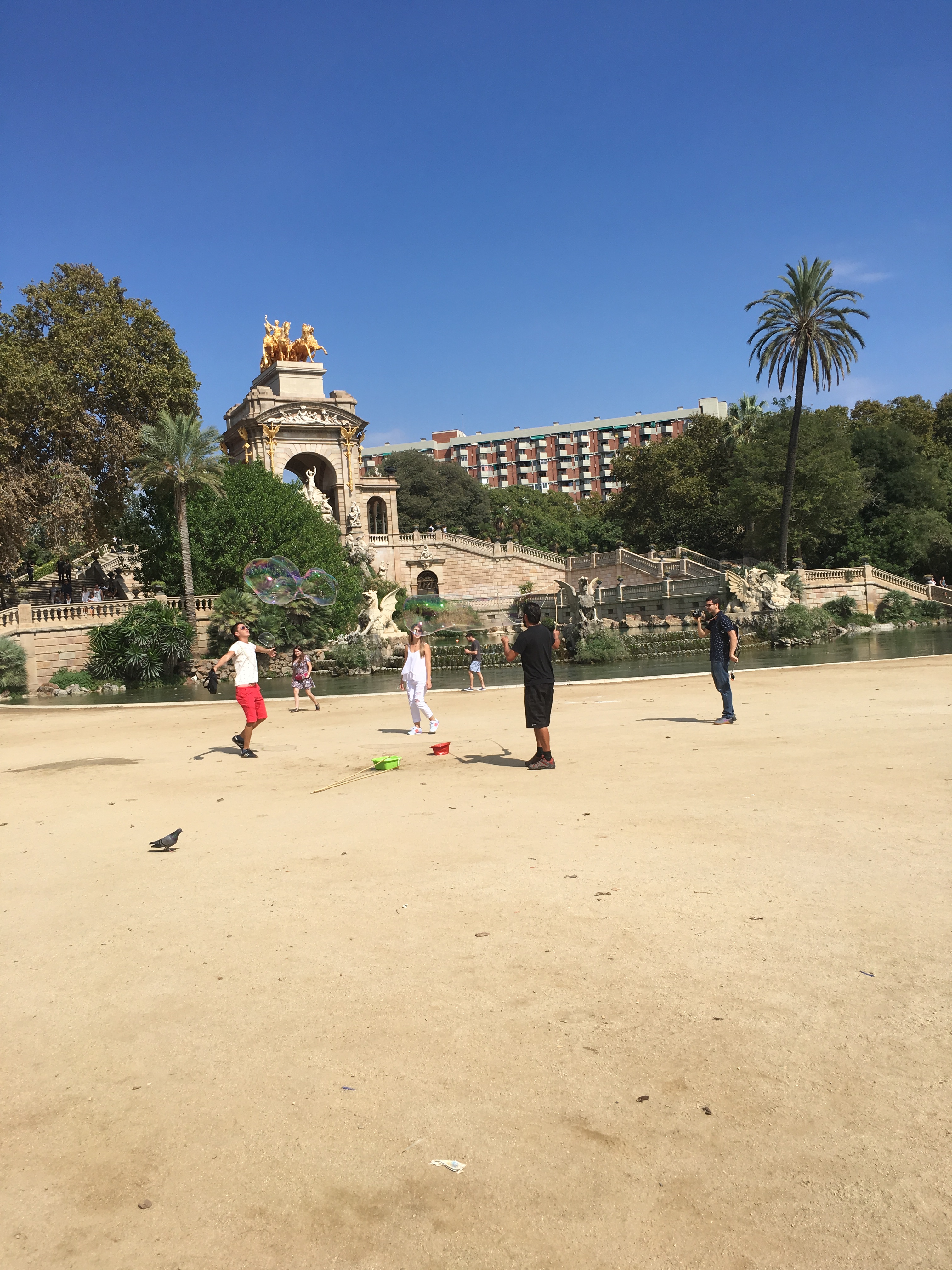 Blowing bubbles, with the Cascada Fountain in the background

Another reason to visit Barcelona: Architecture. Gaudi is very well-loved in Spain, as his architecture is stunning and so unique. His work is everywhere around the city, and it was amazing to be able to see it all! **In the picture above, you can se the Cascada Fountain, which was built by Josep Fontseré, with Gaudi as his assistant.

After leaving the park, I got lost. Again. BUT – I’m glad I did, because I found something very, very important: The Chocolate Muesum. 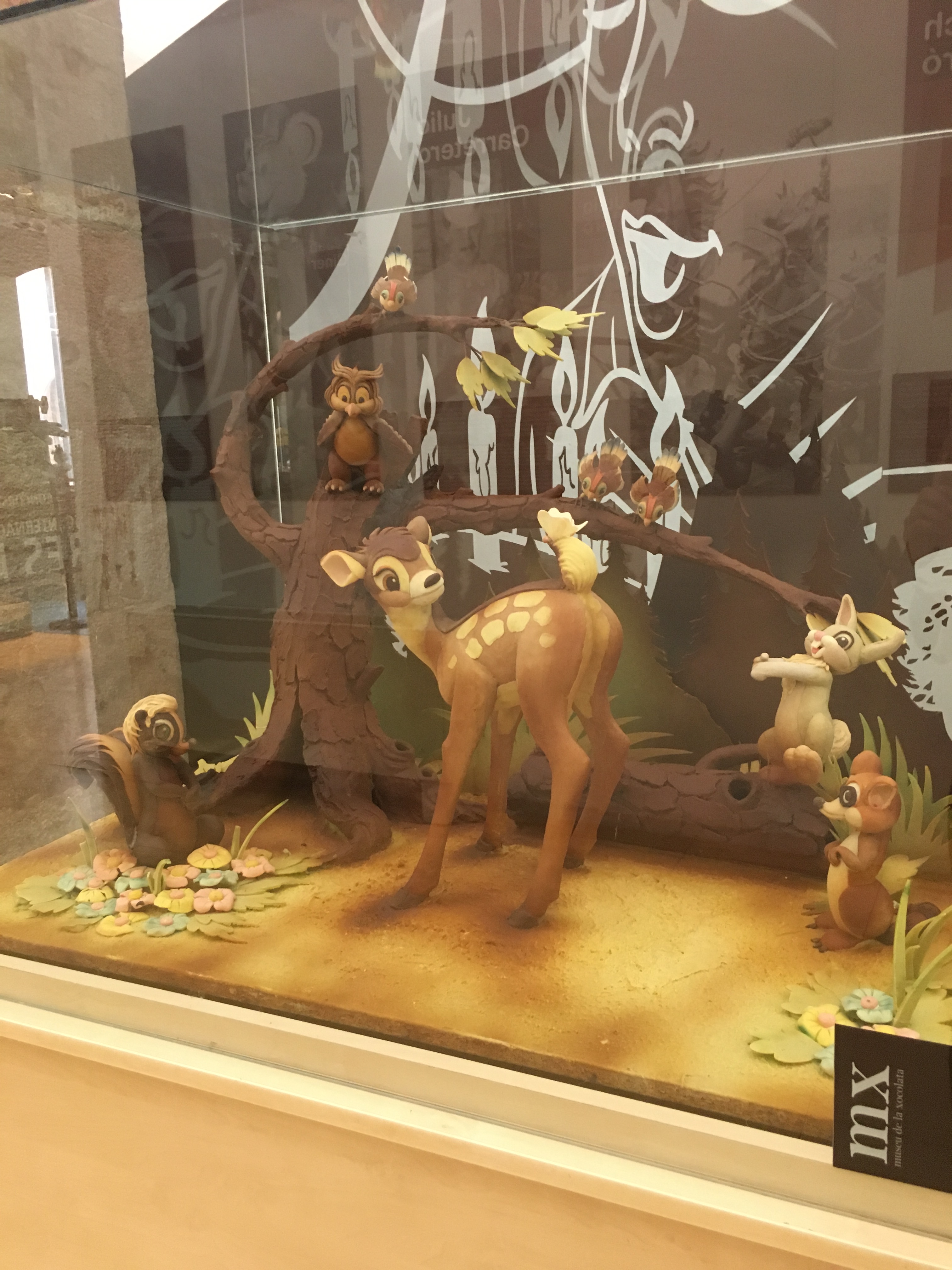 Made entirely from chocolate!

I learned about the history of chocolate, which is something I should know about since I eat so much of it! There were a lot of displays from movies, like minions, star wars, bambi, etc, all made completely of chocolate (see above)!

Since I had been walking around all afternoon, I decided to stop by a local tapas restaurant to grab another snack on my way back to the hostel. Everything was 1 Euro – a small glass of champagne, cheese, meats, etc. So, cheese & rose it was! 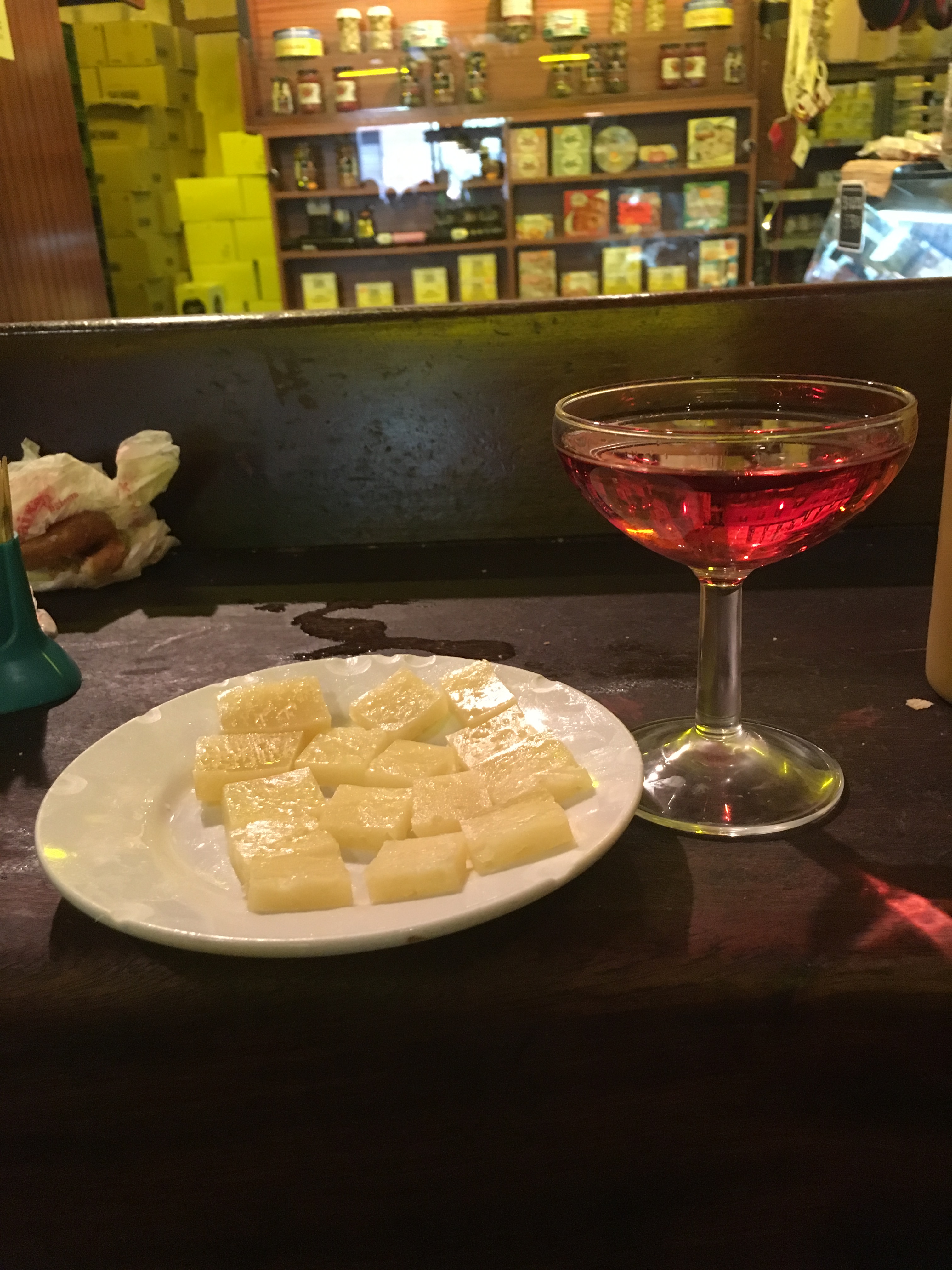 After finally making it back to the hostel, I showered & got ready for the night walk. There is a morning and afternoon activity planned everyday, and that night we walked for about a half hour across the city & up a LOT of steps & hills to get to a look point over the city. (I walked 12+ miles this day!)

We grabbed a bottle of wine & some snacks, and watched the sun set over Barcelona.

This night was hands down my favorite part of Barcelona – it was relaxing, gorgeous, and the views were unbelievable! If I lived in Barcelona, I would come here almost every night.

Afterwards, we all went back to the hostel to get ready for the night. The hostel I stayed at cooked a “family dinner” every night, and you could eat a plate (or 2) if you donated some money to help pay for the food. Afterwards, we all help clean up, then begin drinking before going out. Unfortunately for me, I forgot that I had been up for almost 24 hours and there was a 6 hour difference between Thailand and Spain… so, I got ready, decided to take a quick nap, then fell asleep until the next morning… Oops! Fortunately, I had another day to explore 🙂

Day 2 was all about getting lost, trying to find the best views of the city, castles, gardens, yoga, and dancing! 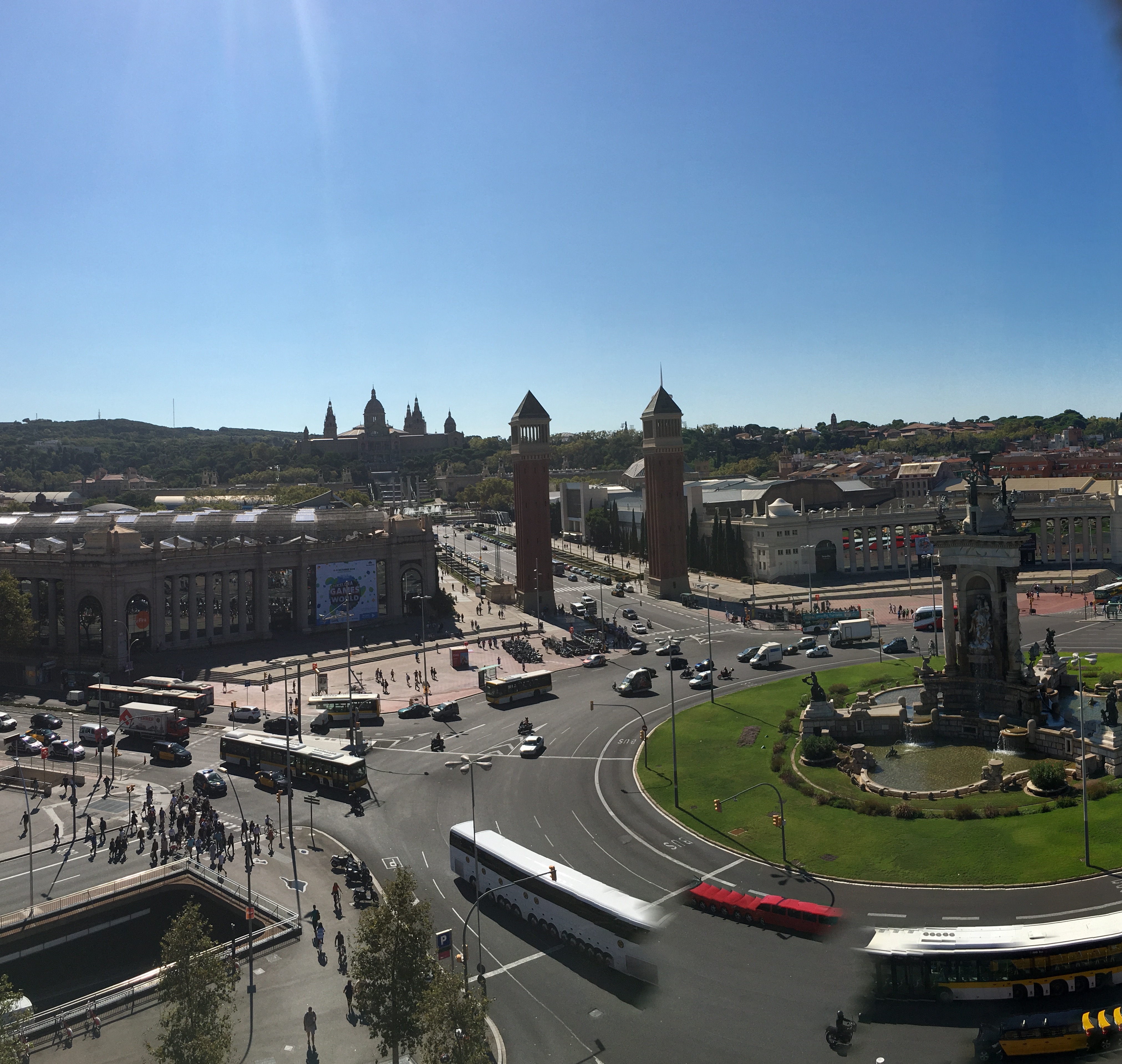 Placa Espanya – picture taken on top of a shopping mall!

I started my day off with with heading west to Plaça Espanya & finding the Museu Nacional d’Art de Catalunya + water fountain that overlooked a part of the city. 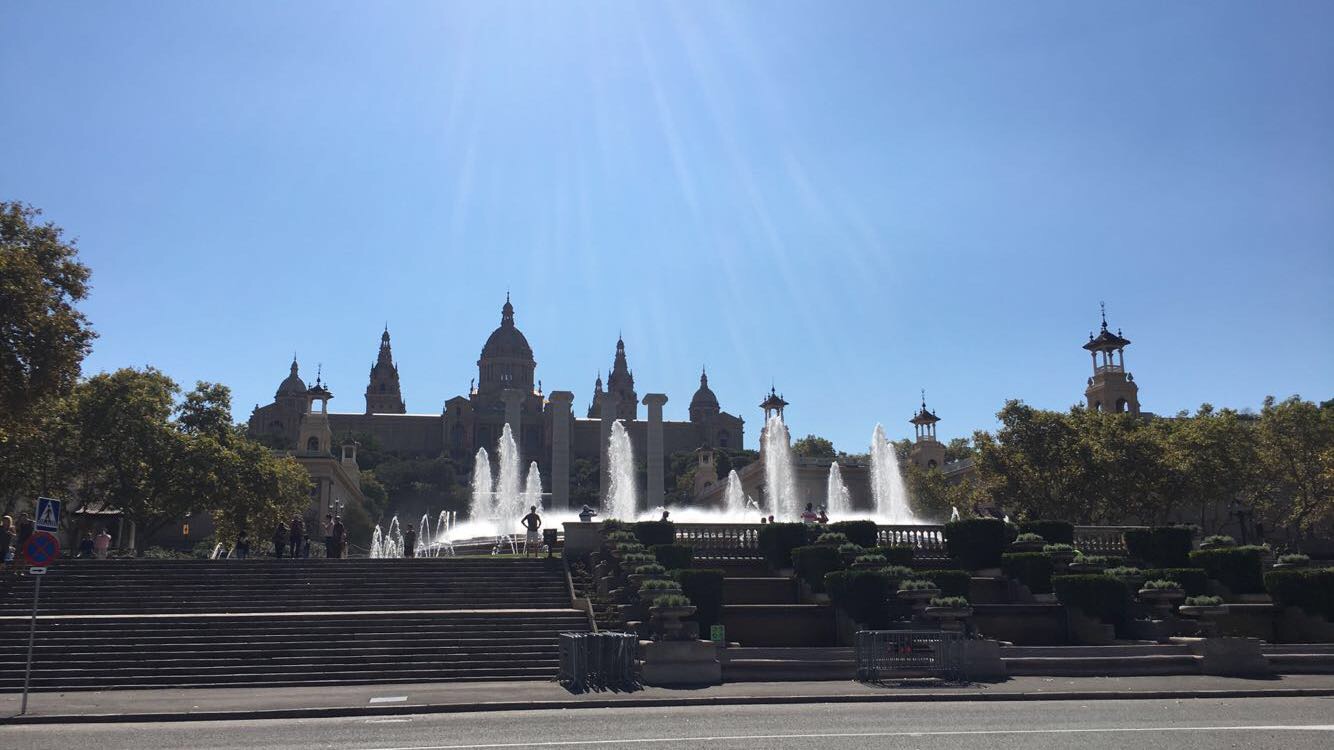 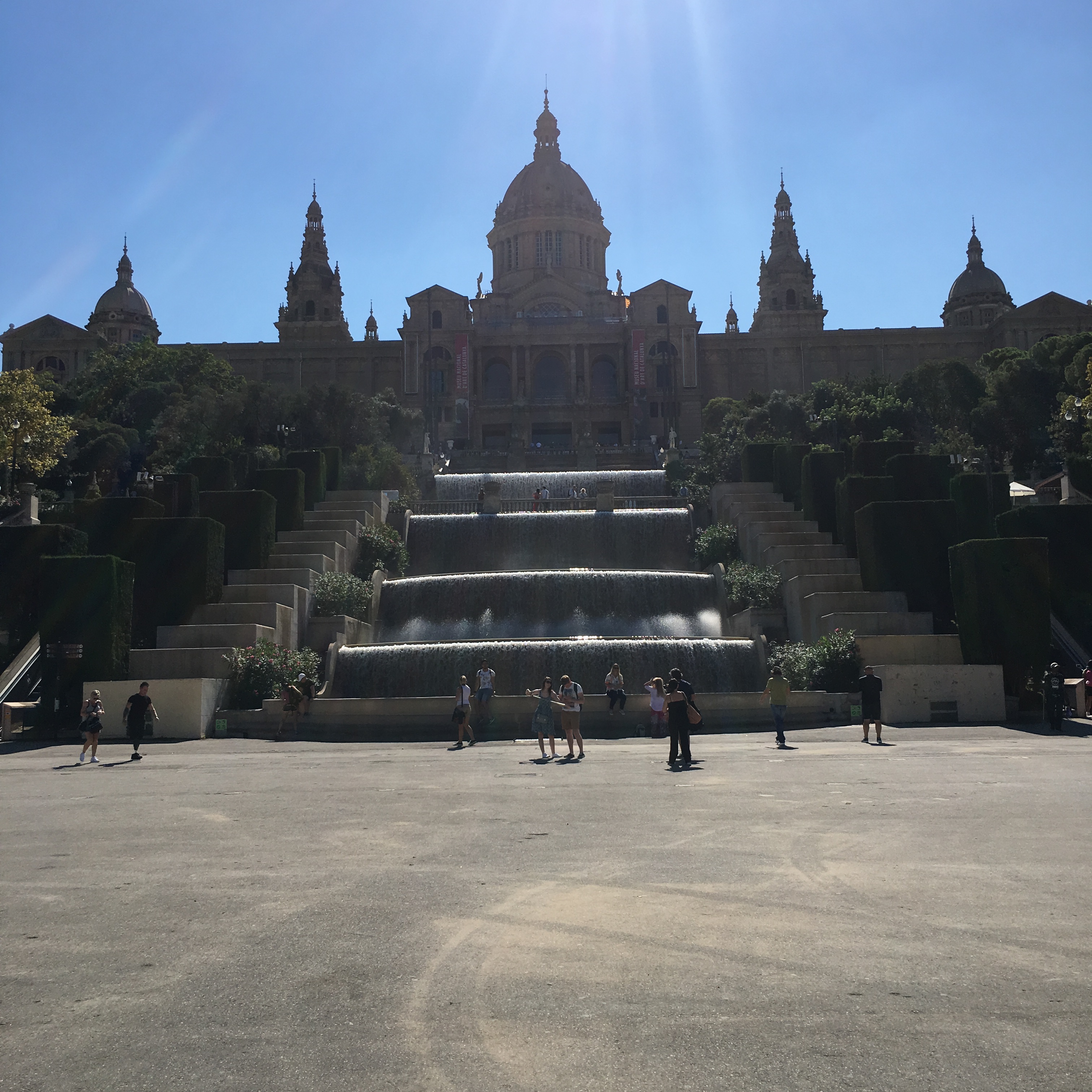 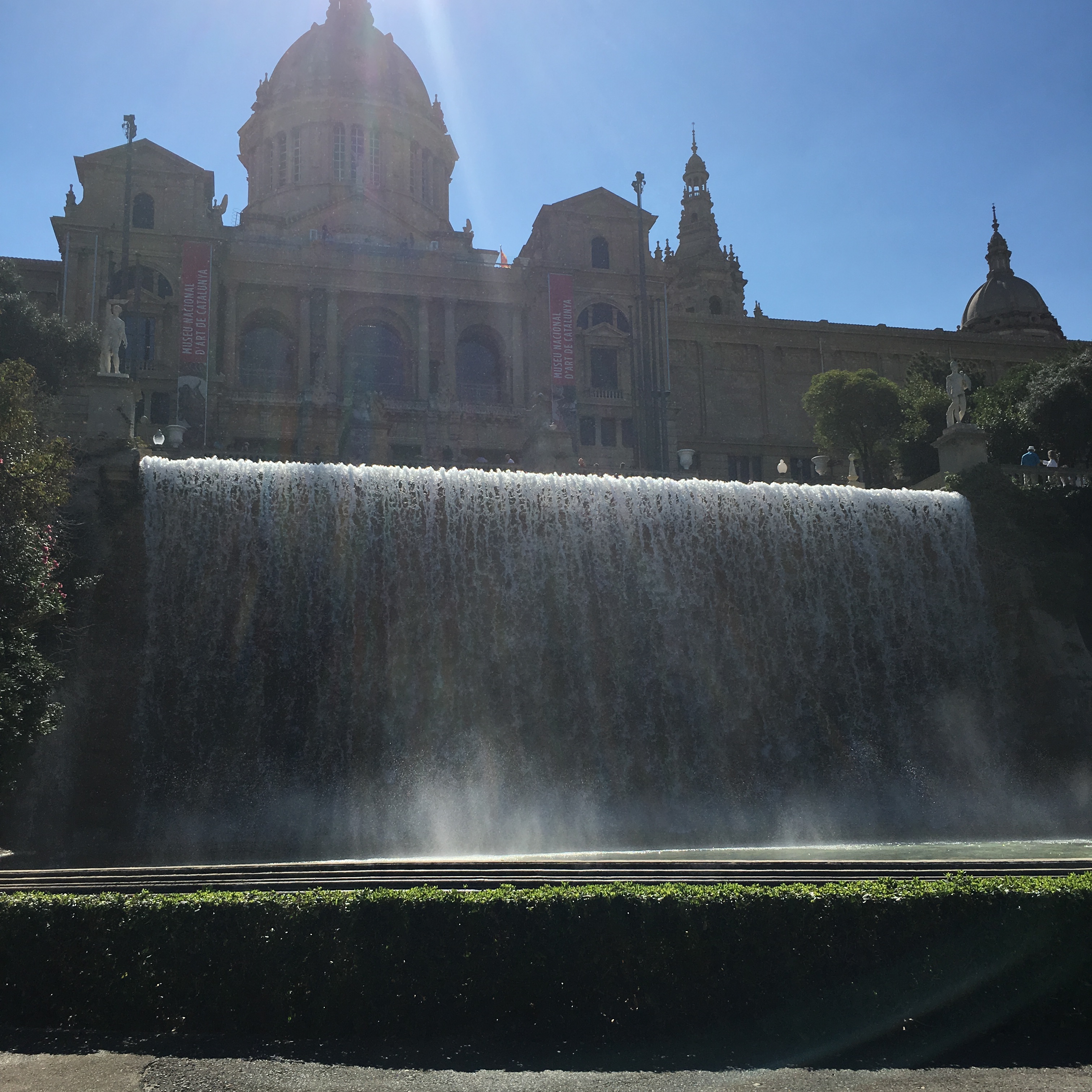 The Fountain is HUGE in person!

View over the fountain!

I am not really a museum person (unless it is about chocolate!), so I didn’t actually go IN to the museum… but, the outside + views were absolutely amazing!

Afterwards, I began to wander South to the Olympic museum & stadium(s) as well as through some gardens. Honestly, I was just trying to find my way to Montjuïc Castle Castell de Montjuïc, but I could not for the life of me figure out how the heck to get there. Fortunately, there are signs that point you there, and a LOT of hills that let you know that you are reaching a higher part of the city (where all the views are!).

You can also take a cable car up to the castle, which will definitely save you some time and miles… However, I recommend walking, as it is great exercise and you can walk through different gardens on your way!

I had to pay a small amount (I think 10-20 Euro) to get into the castle, which was really cool to explore. And the views were of course, amazing – you can look out over the city & the harbor – well worth it!

On my way back to the hostel, I got lost. Again. However, I did find a yoga studio, which I ended up going to later that night… this is why I love traveling! 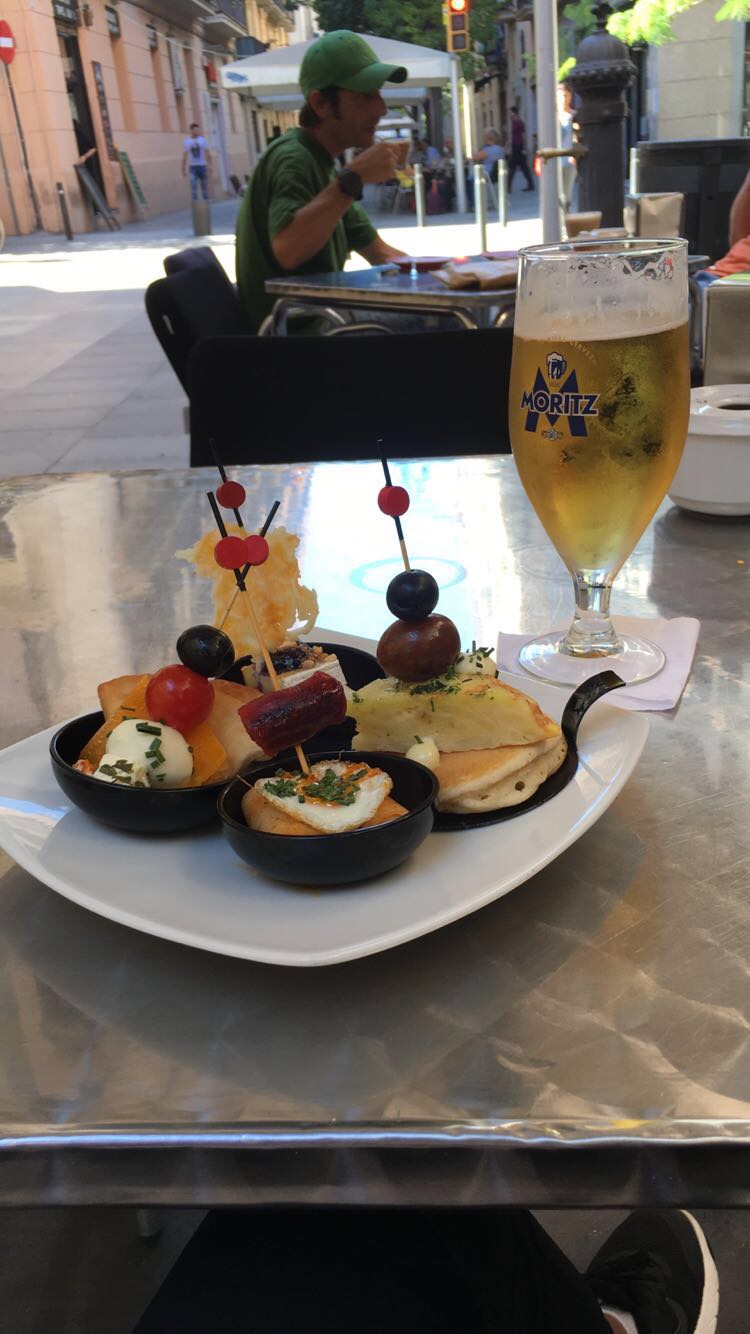 I stopped at a local tapas restaurant called Blai 9 (recommended by the hostel staff) for some food + a beer, because.. Spain! There needs to be more restaurants like this in the US… It’s like a buffet, but for appetizers – 1 Euro each! 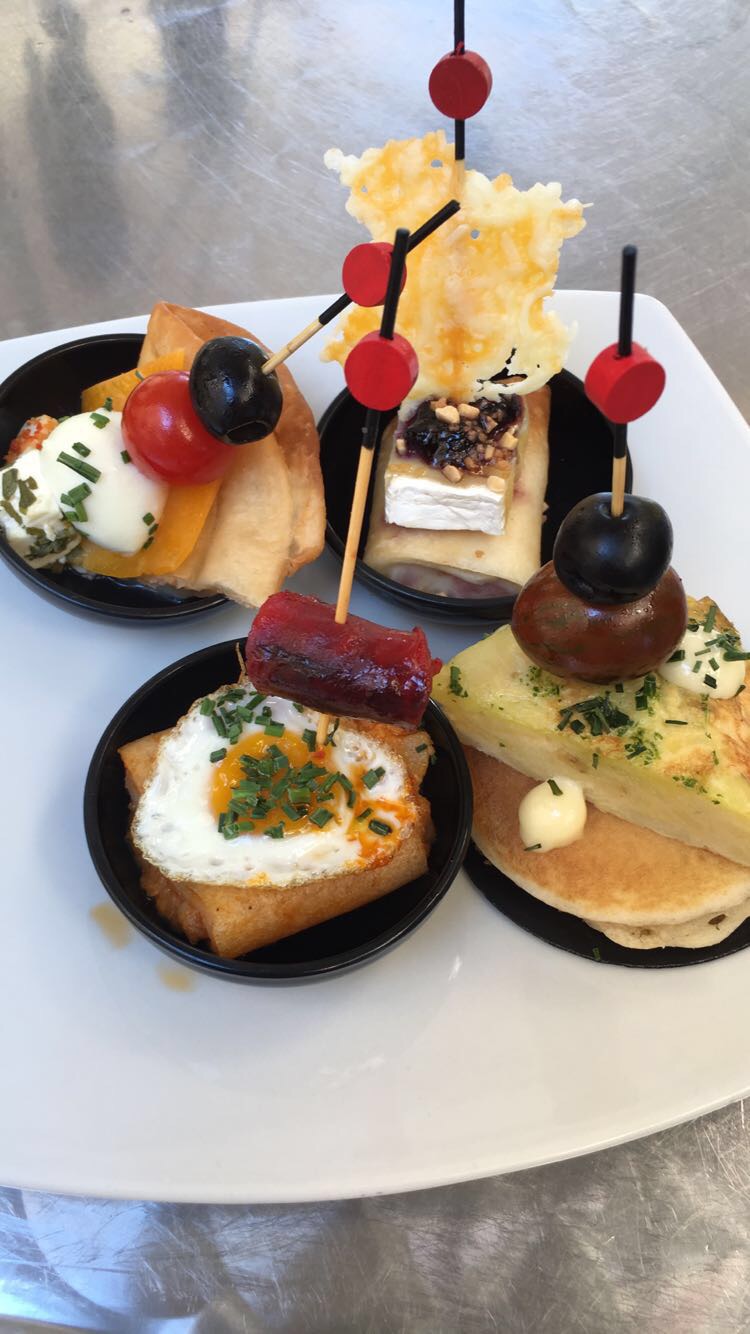 After walking around all day, I stopped by a local nail studio for a pedicure… 20 euro for a gel pedicure = best money spent the entire trip! The salon staff were hilarious, and they helped me learn a few more spanish words in the hour that I was there 🙂

After my pedicure, I finally made it back to the hostel for a quick nap… then, YOGA! The entire point of my international travels 🙂

I went to The Garage, a yoga studio transformed from an old garage from the 1940’s. It was an absolutely beautiful space, and I was lucky enough to take a class from the owner. 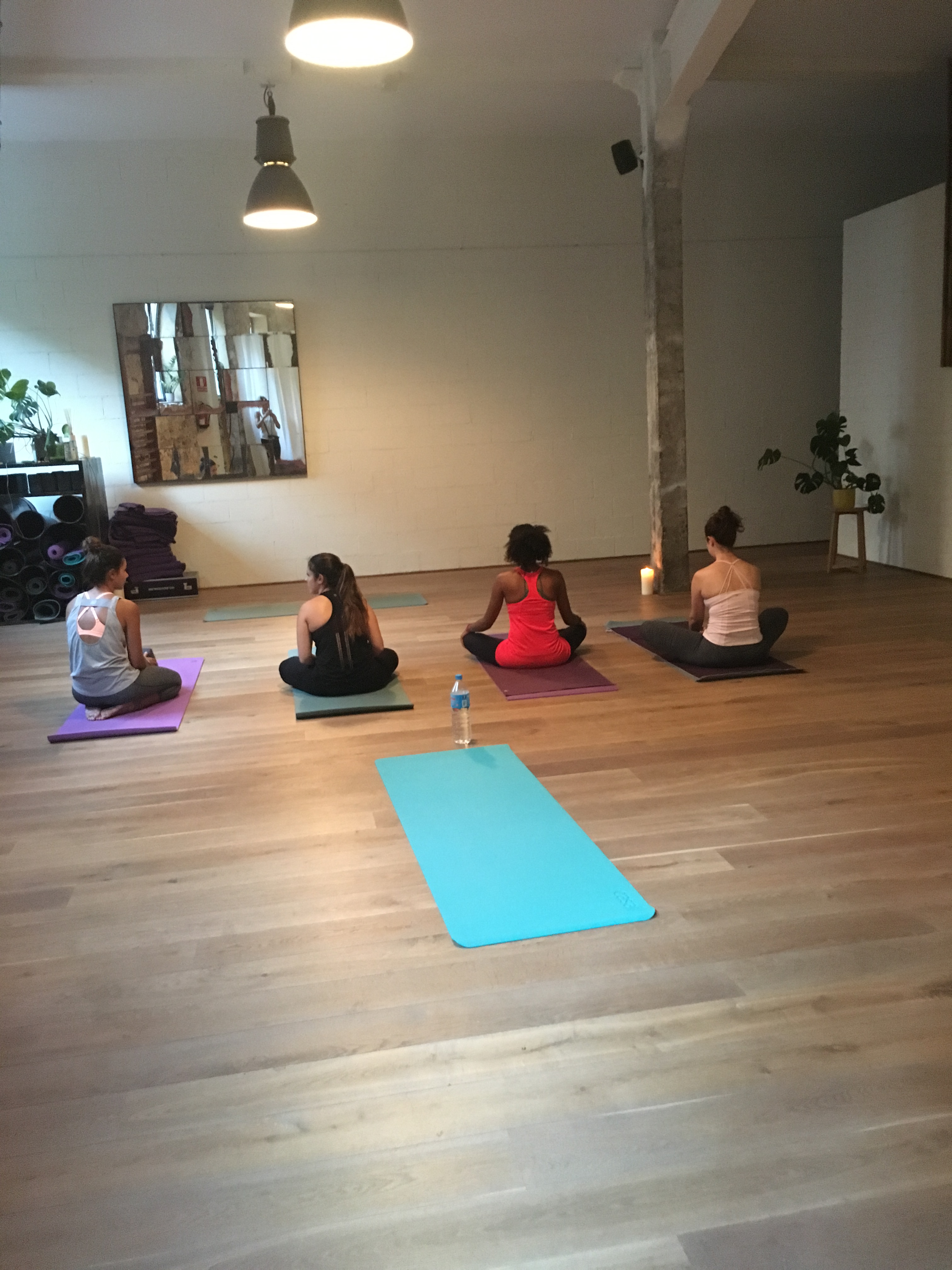 The class was slow, calm, and entirely in spanish & sanskrit – so I knew what was going on half the time! Chanting & breathwork followed by a simple sequence was perfect following a day of walking 10+ miles around the city.

Following yoga, I went back to the hostel for a shower and dinner… then a night full of drinking & dancing! I couldn’t tell you the places we went, as we took a train across the city and went to 2-3 different places. However, it wasn’t the places that we went that were awesome – it was the people. I met some really amazing, beautiful people traveling – for fun, on a search for meaning in their life, coming from a pilgrimage on Camino de Santiago, students, working people in their 20’s and 30’s… It didn’t matter if I’d ever meet these people again – hearing their stories and learning from them are priceless, and it’s one of the main reasons I travel. Hearing about someone else’s experience can literally change the course of your life, your passion, where you live, where you travel… it’s amazing, and I think everyone should experience & meet other travelers at some point in their lives (whether it be in a hostel, across the world, across the US, in a bar, at an airport… location doesn’t matter!).

After leaving the first bar (where an entire bottle of liquor was given to pour as much as we wanted into a glass), we went to a club and danced… until 2:30 am! Hours literally passed by in minutes, I swear. So, I left with a few other people & headed back to the hostel. After we got back, I ended up walking to the pier and talking with another girl from Germany  until 4 or 5 in the morning. It was so quiet & peaceful, and it was the perfect ending to my stay in Barcelona!

The next morning, I decided to stop by La Boqueria again, because I wanted some chocolate/candy before grabbing a cab to the airport… 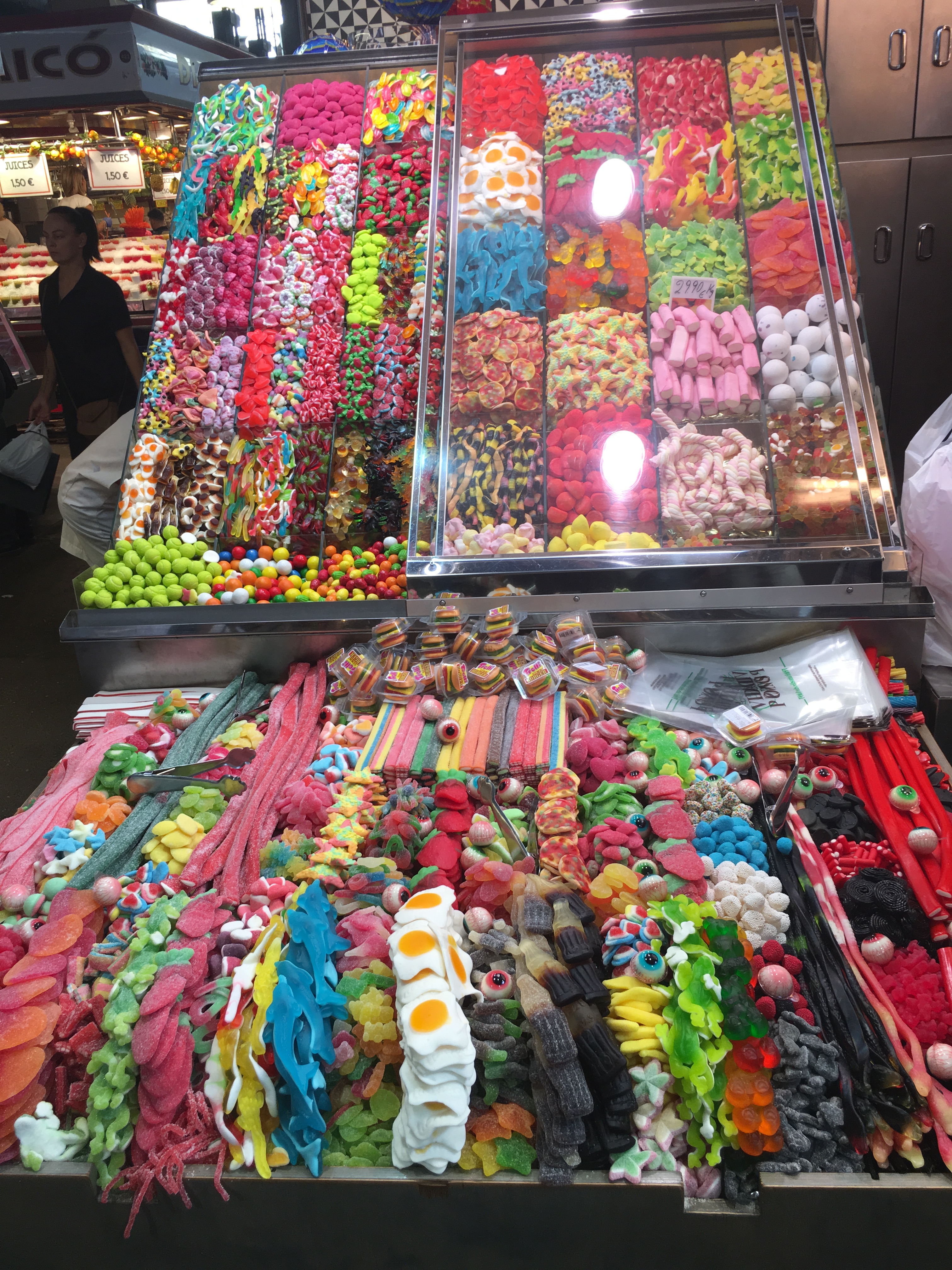 and, of course, some gelato and a cappachino for breakfast. Who doesn’t love being an adult?? (I swear, I don’t eat this bad everyday!) 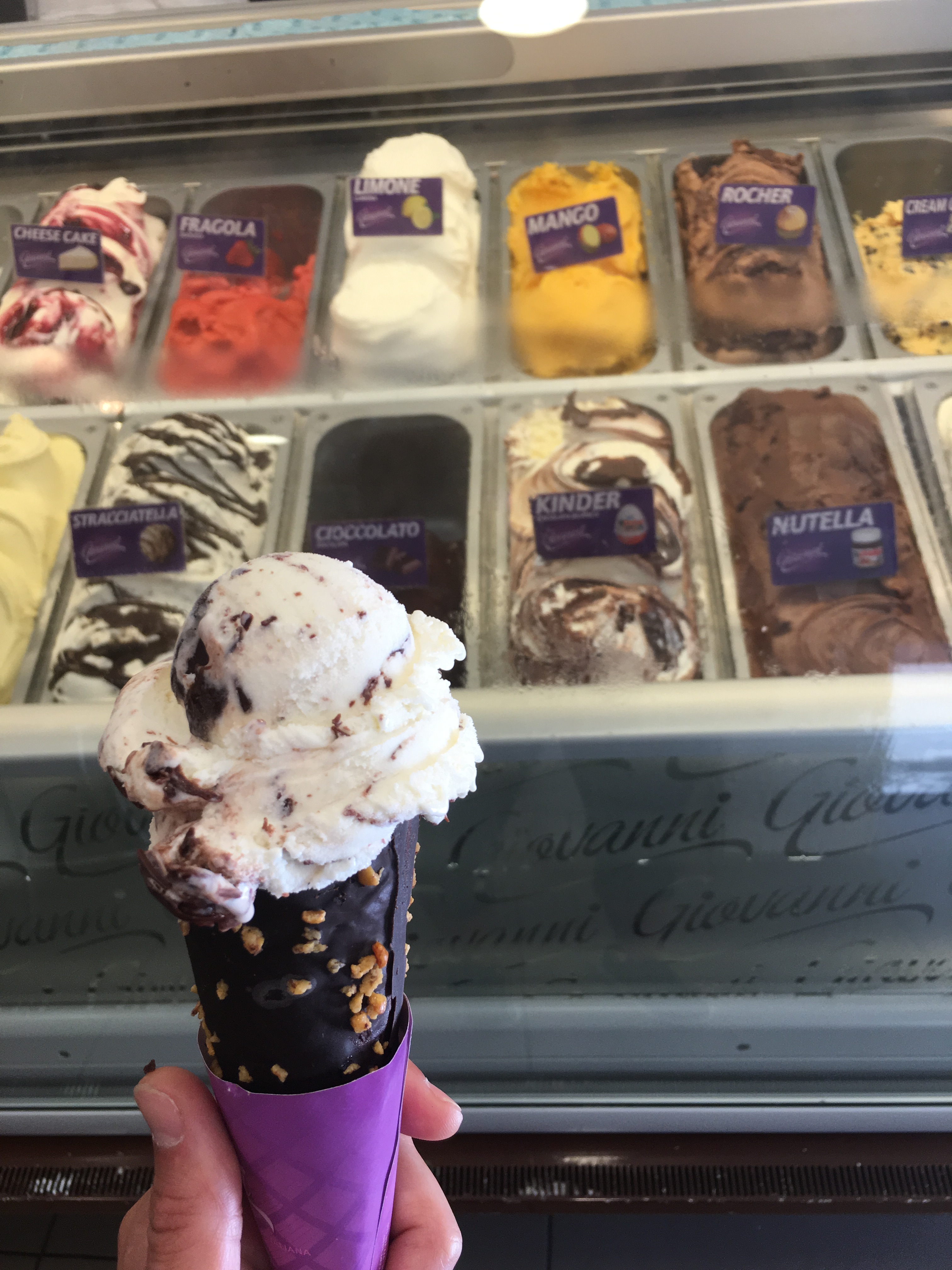 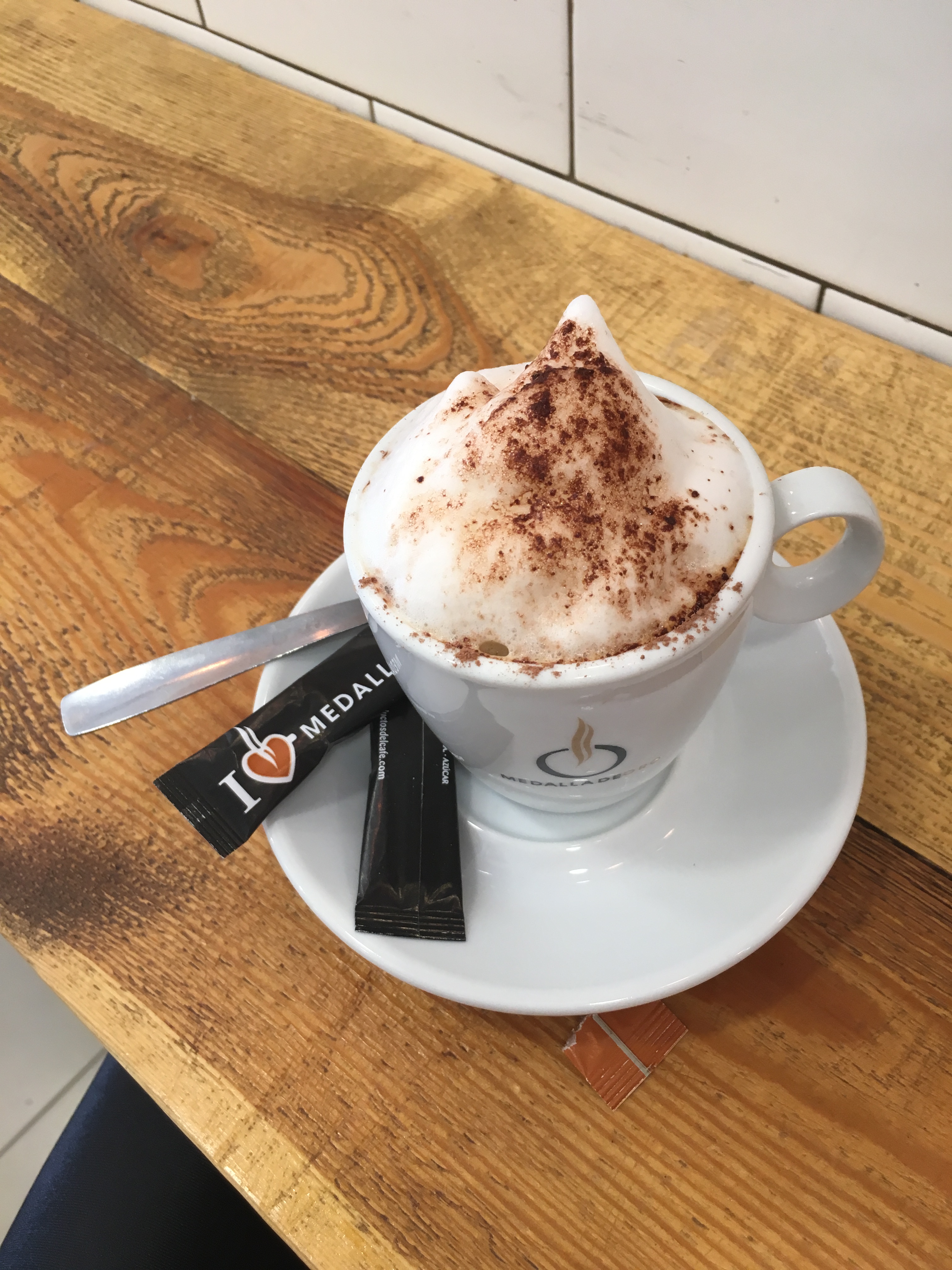 All sugared up, I headed back to the hostel & said my goodbyes. Then, a quick cab ride to the airport, on schedule to fly out for a week in Ibiza (blog post coming soon)!

**Side note – I flew Ryan Air for the first time and learned the hard way that you need to print your ticket out ahead of time… Otherwise, you will have to wait in line for an hour + pay 20 extra euro just to get the ticket printed out.
Also – Spain & Ibiza is expensive. And the cost to take money out at the airport & ATMs are ridiculous – so try to take as much cash as you can before flying internationally, or you will be paying a lot of fees! I recommend stashing different amounts of cash in different areas of your luggage/carry on/clothes in the case that something gets stolen or lost.

Overall, Barcelona is amazing. I would go back and spend more time there, or even live there for a year or 2. The city is gorgeous, and there are so many things to do and explore!

Has anyone ever been to Barcelona? If so, what were your favorite parts??